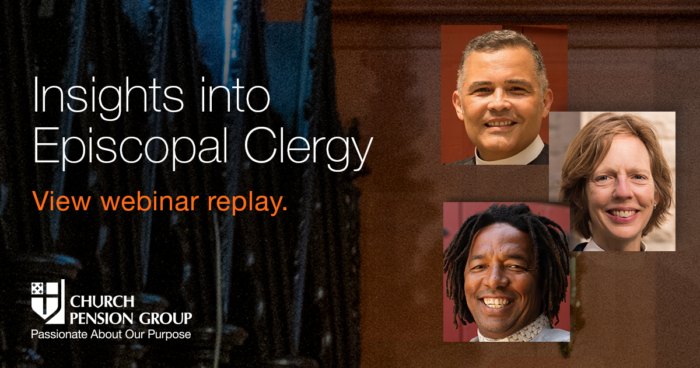 The Church Pension Group (CPG), a financial services organization that serves The Episcopal Church, shared demographic insights about Episcopal clergy via a webinar (www.cpg.org/clergytrends) that was presented by its Research & Data team last week. The research was collected in response to several resolutions passed by the 79th General Convention of The Episcopal Church.

“This research shines a light on the evolving demographics of Episcopal clergy,” said Matthew J. Price, PhD, Senior Vice President, Research & Data at CPG. “Some of the results were expected, but some were a surprise to us—and may surprise others as well.

The Rev. Alistair So-Schoos, Data Scientist, Research & Data at CPG, added, “Our findings offer insights into the trends in ordination, deployment, and compensation that could inform the Church’s discussion of diversity, equity and inclusion. I encourage anyone who has an interest in the diversity of the Church’s clergy to view our webinar to learn more.”

Among the key findings:

CPG has hosted several webinars to share information about its work, to collect feedback, and to discuss topics of interest to the Church. Individuals are encouraged to view past webinars with senior leaders of CPG and its Board of Trustees who have engaged in conversations on topics ranging from pension parity to racial reconciliation and socially responsible investing. Past webinars can be viewed on CPG’s YouTube channel.