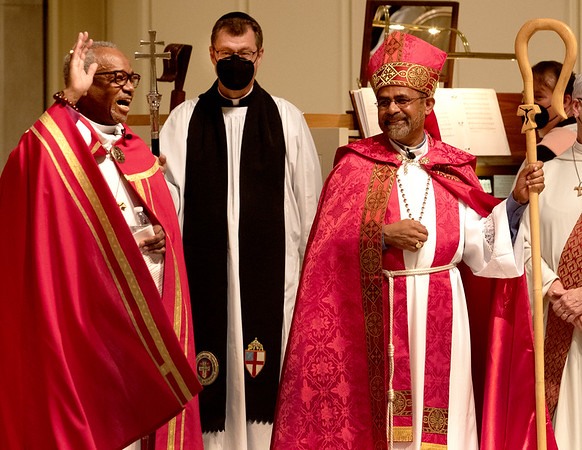 Jos Tharakan was ordained and consecrated the 14th bishop of the Episcopal Church in Idaho on June 25. Photo: Diocese of Idaho

[Diocese of Idaho] The Rt. Rev. Jos Tharakan, a native of Kerala, India, was ordained and consecrated the 14th bishop of the Episcopal Church in Idaho on June 25 at the Cathedral of the Rockies in Bosie. Tharakan succeeds the Rt. Rev. Brian Thom, 13th bishop of Idaho, who retired on June 24.

Presiding Bishop Michael B. Curry, was the chief consecrator, joined by other Episcopal and Lutheran bishops from around the country, including Thom, for the traditional laying-on of hands to consecrate the new bishop. The ceremony included a festive procession of diocesan, ecumenical and civic leaders; clergy and liturgical ministers, with choir and organ, and musicians from the Mexican and Basque communities in Idaho. Members of the Shoshone-Bannock tribe sang and blessed the new bishop in a smudging ceremony.

Idaho Gov. Brad Little, whose home church is St. Mary’s, Emmett, attended the service, as did Boise State University President Marlene Tromp. “I followed the search and heard a lot of good things about him,” Little said. “He’s really got quite a story. It sounds like we’re lucky to have him.”

The Rev. Cathy Cox of the Diocese of West Missouri, a close friend of Tharakan’s, preached the sermon. “It will be an adventure, I guarantee it,” she said. “He comes bearing God’s gifts: Hope, liberation … God’s proclamation of everlasting love and joy.”

After the service, Cox expanded on her remarks, commenting that they had hoped Tharakan, who was serving as the rector of St. James Episcopal Church in Springfield, Missouri, at the time of his election, would be their next bishop. “He is one of the most authentic people I know,” she said. “He is careful, thoughtful and deliberate. He is the most joyful person, and it’s not just hope. He is not afraid of anything. When he needs something, he goes and asks for it. He learned that from Mother Teresa, who he knew.”

Tharakan said he sees The Episcopal Church as “a prophetic community.”

“Prophets help people and prophets challenge people. I don’t want to keep that a secret. We are called to walk with the other, like Jesus on the way to Emmaus, listening carefully, living authentically and loving genuinely,” he added.

— Paul Menser is a journalist and member of St. Luke’s Episcopal Church in Idaho Falls.