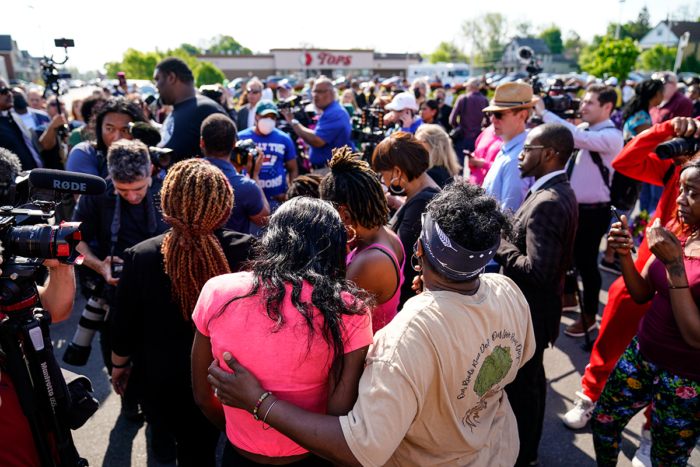 People gather outside the scene of a shooting at a supermarket in Buffalo, New York, on May 15. Photo: Associated Press

[Episcopal News Service] Episcopal leaders are condemning a deadly, racist rampage at a Buffalo, New York, supermarket and joining in prayers for the victims and their families as hate-crime charges loom for the 18-year-old suspect in the shooting.

Payton S. Gendron, who lives 200 miles from Buffalo near the central New York city of Binghamton, is accused of opening fire at a Tops store in a largely Black neighborhood of Buffalo, killing 10 and injuring three people, all but two of them Black. Law enforcement officials have called it “straight up, a racially motivated hate crime,” and a 180-page manifesto attributed to Gendron alludes to the false, racist conspiracy theory that a coordinated “replacement” of white Americans by people of color is underway.

Buffalo Police have released all the names of the 10 people killed.

“While we wait to learn more about this unthinkable situation, I ask you to join me in praying for those who have died, for those who are injured and suffering, and for the families and loved ones whose lives will never be the same,” Bishop Sean Rowe said in a written statement after the massacre. ”Please pray, too, for the man who committed this horrific act, and for everyone whose mind and soul is twisted toward the evil of gun violence by racism.”

Rowe, the bishop diocesan of Northwestern Pennsylvania, also serves as bishop provisional of the Buffalo-based Diocese of Western New York through a partnership between the two dioceses. “Racial hatred has no place in our churches or our communities,” Rowe said. “Here in the dioceses of Northwestern Pennsylvania and Western New York, we are committed to dismantling white supremacy and systemic racism, and we stand in solidarity with the Black community, which today has once again paid an unthinkable price for the twin evils of racism and gun violence.”

Presiding Bishop Michael Curry, who grew up in Buffalo and whose father was rector of St. Philip’s Episcopal Church, a historically black congregation in the city, released a statement May 16 saying his “heart is heavy” at the news of the attack near where he and his childhood friends once rode their bikes. He offered prayers for the victims’ families and gratitude for the police officers who stopped further carnage.

“The loss of any human life is tragic, but there was deep racial hatred driving this shooting, and we have got to turn from the deadly path our nation has walked for much too long,” Curry said. “Bigotry-based violence — any bigotry at all — against our siblings who are people of color, Jewish, Sikh, Asian, trans, or any other group, is fundamentally wrong. As baptized followers of Jesus of Nazareth, we are called to uphold and protect the dignity of every human child of God, and to actively uproot the white supremacy and racism deep in the heart of our shared life.

My heart is heavy with the news that a white supremacist gunman took the lives of 10 children of God in #Buffalo on Saturday. I grew up walking distance from the scene of this hateful crime, and my friends and I used to ride our bikes around the neighborhood. 🧵

On May 15, Rowe led a short prayer service with Denise Clarke-Merriweather, a member of St. Philip’s. The prayer service, livestreamed on Zoom and Facebook, incorporated the Litany in the Wake of a Mass Shooting, which was developed by Bishops United Against Gun Violence after six people were killed at a Sikh temple in Wisconsin in 2012. It is updated regularly with additional prayers for the victims of new mass shootings in the United States.

On May 16, the two partner dioceses’ Commission to Dismantle Racism and Discrimination issued a statement lamenting the Buffalo attack, calling it “another reminder of the forces of evil that plague our country requiring the acknowledgement of ongoing traumatization due to racism and discrimination.”

“While we extend our deepest condolences, we know that a commitment to faith- based action is needed now, more than ever,” the commission said. “Please join us in the concerted effort to promote justice, peace, and love within every aspect of our lives in dedication to our deceased and injured neighbors, as well as all individuals who have been victimized as a result of racial discrimination.”

Gendron has been charged locally with first-degree murder, and the FBI is investigating the attack as a possible hate crime. Gendron, dressed in tactical gear and carrying an assault weapon, is accused of arriving at the Buffalo supermarket midafternoon May 14 and shooting four people in the parking lot before continuing into the store and firing on shoppers and employees. A security guard who returned fire was among those shot and killed.

Officials said Gendron livestreamed the attack on the website Twitch before Buffalo police responded and persuaded Gendron to surrender.

The attack, by a gunman reportedly driven by white supremacist ideology, has drawn comparisons to other racially and ethnically motivated massacres, including the 2015 shooting at Mother Emanuel African Episcopal Church in Charleston, South Carolina, that killed nine Black church members; the 2018 shooting at Tree of Life Synagogue in Pittsburgh, Pennsylvania, that killed 11 worshipers, and the 2019 shooting at a Walmart in El Paso, Texas, that killed 23 people, most of them Latino.

Ruth Whitfield’s family is still trying to figure out how to tell her husband of 68 years that she died. That she was killed in a racist attack on her community. She was on her way from visiting him when she stopped by the Tops on Jefferson. @WGRZ @wkyc https://t.co/2krWMRToSY

One of the 10 fatal victims in Buffalo, 86-year-old Ruth Whitfield, had stopped at Tops for groceries while on her way home from visiting her husband, who lives in a nursing home. “That day was like any other day for my mom,” son Garnell Whitfield said at a family news conference May 16. “She encountered this evil, hateful – she didn’t deserve that. She didn’t deserve that. Nobody deserves that.”

Whitfield, a former Buffalo police commissioner, issued an emotional, impassioned plea for solutions to the continued threat of racist violence like the attack that killed his mother. “What are we going to do to change it?” he said. “This is our mother; this is our lives! We need help. We’re asking you to help us. Help us change this. This can’t keep happening.”

The Rev. Steve Lane, priest-in-charge at St. Philip’s, serves as a chaplain for Buffalo police officers and responded to the shooting site later in the day May 14. About half of the department was on the scene by then, but the victims’ families had left, Lane told Episcopal News Service. He praised the officers for their ability to “provide a calm presence in the middle of a crazy crisis.”

Lane also acknowledged his unusual role as a white priest of a historically Black congregation. Since the attack, he has reached out to members of St. Philip’s. “I have some parishioners who shop there, and we have parishioners who knew people who were shot there,” Lane said, but no one from the congregation was at Tops when the shooting happened.

Lane said the reaction of many St. Philip’s parishioners, in addition to grief for the victims, has been a solemn weariness at yet another case of racist violence targeting Black victims. “This has happened before, and it has happened again,” he said.