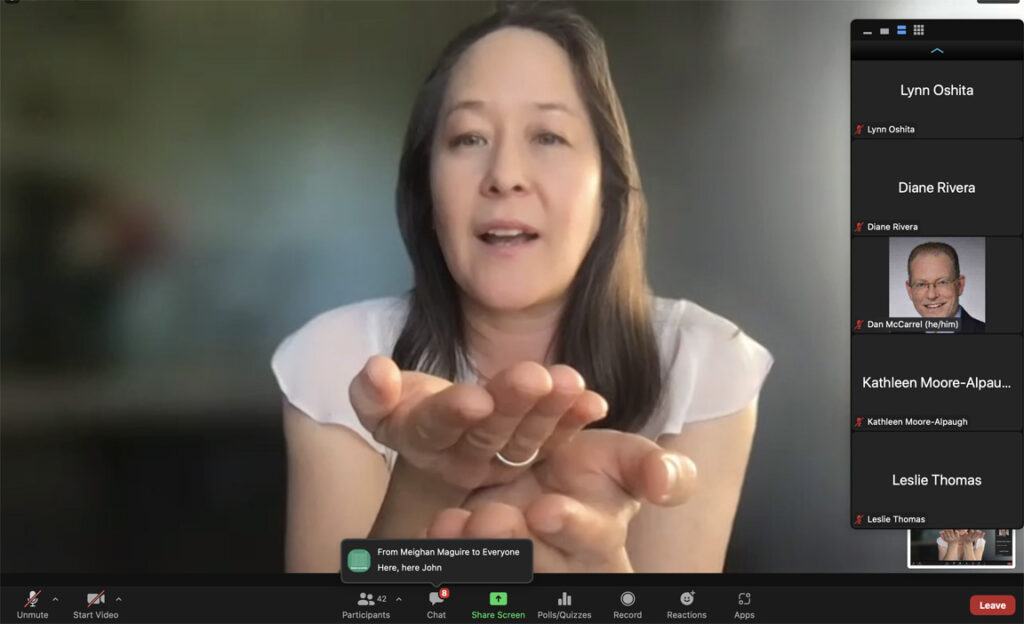 [Diocese of Los Angeles] A Feb. 12 online survey of about 68 Southern California Episcopalians indicated that 31% of those responding had experienced — and 47% had witnessed — incidents of race-based overt or subtle harassment at their churches.

Funded through a grant from The Episcopal Church’s Becoming Beloved Community initiative, the training was intended to equip participants with tools to intervene when witnessing incidents targeting Asian Americans and Pacific Islanders. Nationally, more than 10,000 such anti-AAPI hate incidents were reported between March 2020 and November 2021, according to the Stop AAPI Hate Coalition. The coalition tracks and responds to incidents of hate, violence, harassment, discrimination, shunning and child bullying against AAPI in the United States.

The Rev. Peter Huang said The Gathering received a $7,800 grant from Becoming Beloved Community, which seeks to build capacity in the church for the work of racial healing, reconciliation and justice. The grant will be used to support other offerings throughout the year, he said.

“What we want to do with this grant, generally speaking, is to provide meaningful connections between our Episcopal Church community with our AAPI communities and neighbors,” said Huang, a convener of The Gathering.

In the same survey, 25% of those polled said they had not paid attention or didn’t know if such incidents had happened in their congregations. Another 13% said incidents of racially based harassment and microaggressions, or subtle discrimination, did not happen at their church. 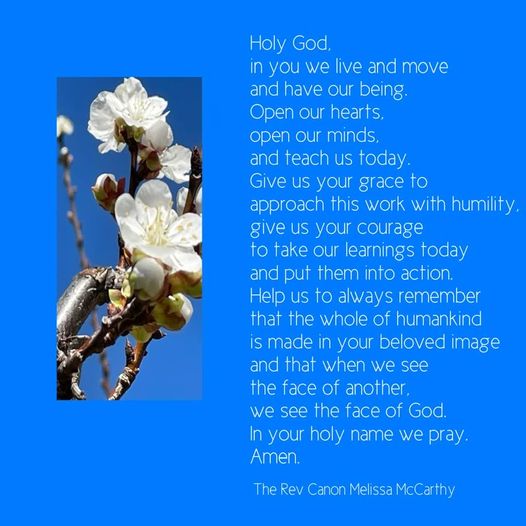 The opening prayer at The Gathering’s bystander intervention training was delivered by Canon to the Ordinary the Rev. Melissa McCarthy. Graphic: Susan Russell

“We are hoping that by increasing the awareness that this kind of harassment and violence exists, and of the uncomfortable truth that it exists even within our churches, we can begin to deal with it,” said Erika Bertling, a member of The Gathering and an intercultural educator and consultant who helped facilitate the training. “We want to provide tools to deal with it,” she added.

Anti-AAPI incidents have run the gamut from racist comments to physical assaults, according to Huong Pham, institutional giving manager for AAAJ-LA, who along with executive assistant Elyse Izumi conducted the first half of the training, with a curriculum provided by Hollaback!, a nonprofit that aims to end all forms of harassment.

Pham said that, if someone intervenes when witnessing an incident of harassment, 79% of the time that intervention helps calm the situation. Yet, only about 25% of the time do people actually step in to help.

“The training is a practical, very empowering, proven methodology for bystander training designed to give people who witness aggression against the AAPI community the tools to be able to do something about it,” she said. “It prioritizes the safety of both the victim and the bystander. It is empowering because many times people in that situation don’t know what to do.”

Included in the training were the “5 D’s” of intervention – distract, delegate, document, delay and directly confront the perpetrator or perpetrators.

“We’re really excited and energized to be blessed with this grant and to do these projects,” Bertling said. “The last few years, we’ve focused on bridge building and being a known and trusted resource for connection and solidarity.”

The training is just one of The Gathering’s initiatives aimed at elevating the voices of the AAPI community and creating safe spaces, “to dialogue and to ask the hard questions … a brave space where you enter expecting to challenge yourself, to learn, to welcome discomfort, but in a way that is not going to compromise your safety or cause trauma, and where you know there is support,” she said.

Bishop Diocesan John Harvey Taylor, who participated in the training, said the country is “now in a conversation about whether it’s really prepared to be a plural nation. There are some who may be so afraid of plurality that they might put their preference above democracy. For America to survive and thrive it needs to recognize that it’s a plural nation… and I think the same thing can be said of the church, and of any institution that wants to be authentic, and healthy and happy.”

While many of the diocese’s 134 congregations are in predominantly white neighborhoods and communities, some are also located in areas of great diversity, and have an opportunity to build bridges with their neighbors, he said.

“A church which looks one way in a neighborhood that looks another way doesn’t have a thorough reflection of the face of God in that neighborhood,” he added.

Canon to the Ordinary the Rev. Melissa McCarthy, also a training participant, said clergy can create visible support for anti-racism programs and for people of color, through preaching, teaching, and participation in anti-racism programs. “Church spaces are great places to have these conversations,” she said. “But we’re only in church a few hours a week; most of our week is spent out in one of the most diverse areas in our nation. There are a lot of opportunities to put this into practice just in our daily lives and to tell that story back to the church.”

Huang agreed. “The phrase that keeps coming to me is choosing different, choosing … opportunities for partnerships with community organizations. There are so many possibilities that we can tap into, if only we open ourselves up to that.”

He consulted with a congregation that was holding a fundraising event around the Chinese New Year. “Part of the conversation was my engaging them and saying, ‘Well, what if your church is situated in a highly Asian-populated area, would you invite the Chinese PTA to make dinner with you? Or would you find a common fundraising goal to share and begin to create new opportunities for engagement?”

To clergy, he wonders, “What do you preach? Who do you quote? What movies do you reference? Leonardo DiCaprio and Meryl Streep are great actors, but when I choose to watch different movies and quote from different books, … that creates a much safer environment for Asian Americans coming to church, to realize, this is not just a white dominant leadership and white dominant content. That’s part of creating a safer space for church.” 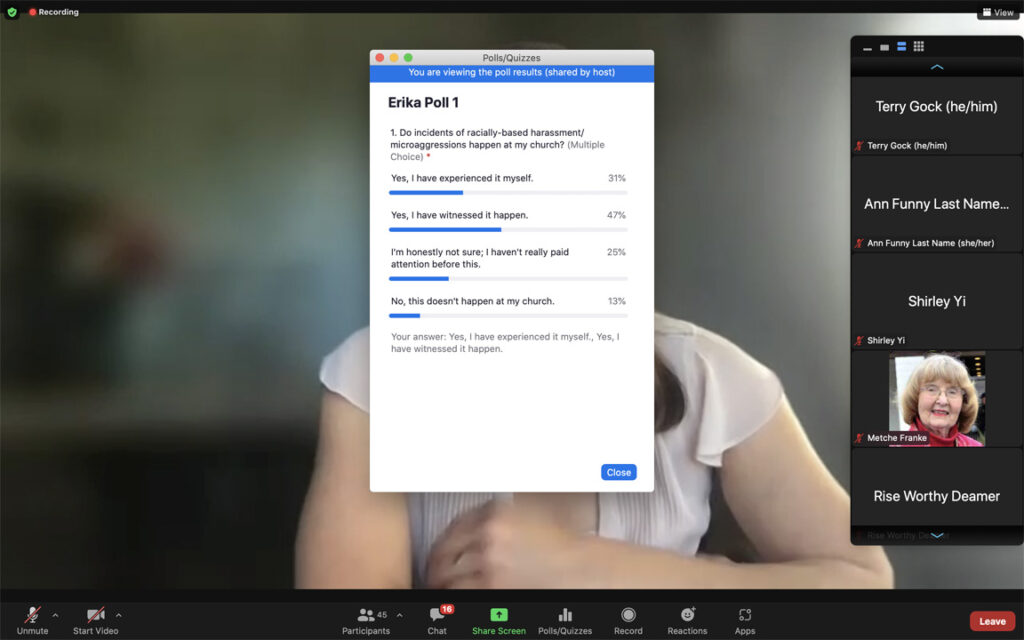 A survey among participants in the bystander training showed that incidents of bullying and microaggression occur even in churches.

Next step: A multimedia Eastertide devotional

As part of the grant, the Gathering will also offer a digital, multimedia Eastertide Devotional, facilitated by Jenny Goto, a visual artist and parishioner at St. John’s Cathedral in Los Angeles.

“It is going to be fresh and dynamic, and we’re really excited,” she said. “Choosing Eastertide is such a celebratory season, with the triumph of the resurrection. We want to take a moment to celebrate the positive things in our community and the strength of our community as well.”

The devotional will be accessible through The Gathering’s Facebook page, and will incorporate visual art, vocal and instrumental music, hip hop artists, photography, spoken word poetry, videos and other resources and will change daily, Mondays through Saturdays, she said.

Weekly themes will celebrate the overarching theme of the resurrection, Goto added. “We hope to be educational and spiritually inspiring for all people, not just AAPI people.

“That’s part of the grant theme, to educate folks in our midst about the AAPI community and people inside The Episcopal Church or our own local community.” Plans are for the devotional to go live the day after Easter and conclude with a Pentecost worship service, she said.

Included will be opportunities for non-AAPIs “to witness God’s belovedness in the joys and pains of the AAPI community, to listen more deeply to AAPI stories, and to get to know AAPI neighbors more intentionally,” according to the grant description.

Through the grant, The Gathering also intends to develop an anti-AAPI racism resource kit for diocesan congregations. The resource will offer insights for combating racism and highlight local community organizations serving AAPI causes with whom congregations may partner to help build lasting connections and fight racism.

The Gathering also hopes to partner with churches to host community forums to help assess how the congregations understand their local AAPI communities, and to aid them in building resources with those communities. Another part of the grant involves development of Becoming Beloved Community-identified products, such as T-shirts and tote bags to visually connect The Episcopal Church and anti-AAPI racism, according to the grant application.

According to the grant application, The Gathering is also available to help replicate similar efforts across The Episcopal Church: “We would be delighted to assist other dioceses in developing similar programs that may facilitated Becoming Beloved Community with AAPIs. In this way, we hope to plant the seeds for Beloved Community that will extend far beyond the borders of the Diocese of Los Angeles.”

The work of Becoming Beloved Community grew out of the 79th General Convention of The Episcopal Church’s Resolution D002 in 2018, which allocated $5 million for the triennium for “efforts to respond to racial injustice and grow a Beloved Community of healers, justice makers and reconcilers.”