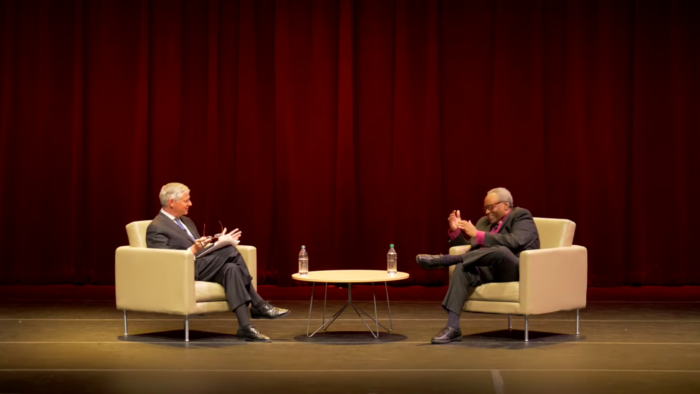 Historian Jon Meacham and Presiding Bishop Michael Curry sit Jan. 13 for a discussion of the intersection of religion and politics at Vanderbilt University in Nashville, Tennessee. Photo: Video screenshot

Editor’s note: Presiding Bishop Michael Curry and historian Jon Meacham met Jan. 13 at Vanderbilt University in Nashville, Tennessee, for a discussion of the intersection of religion and politics, an event hosted by the Vanderbilt Project on Unity and American Democracy and Vanderbilt Divinity School. Video of their conversation is available on the university’s YouTube channel. What follows below is a Q&A with Curry and Meacham that was conducted before the Vanderbilt event by Religion News Service reporter Jack Jenkins.

[Religion News Service] In the wake of the Jan. 6, 2021, Capitol attacks — where Christian symbols and prayers were on full display — can religion still be a force of unity and goodness in America?

That was one of several questions undergirding the virtual event Jan. 13 hosted by Vanderbilt Divinity School and featuring two prominent Episcopalians: the Rt. Rev. Michael Curry, presiding bishop of the Episcopal Church, and Jon Meacham, a Pulitzer Prize-winning author who assists President Joe Biden with speechwriting and serves as canon historian at the Washington National Cathedral.

The pair sat down virtually with Religion News Service to discuss the event, the Jan. 6 insurrection and their thoughts on the role of religion and politics.

This interview has been edited for clarity and length.

RNS: Jon, both you and Bishop Curry participated in events on Capitol Hill last week to mark the one-year anniversary of the insurrection that took place there on Jan 6, 2021. Faith was a constant during that attack, with many participants seen lifting religious and often Christian symbols, singing Christian hymns and praying Christian prayers as they assaulted the seat of American democracy. As a historian, how did you contextualize that moment in American history?

Meacham: Religious faith in the American experience has given us some of our finest hours and some of our worst. I believe that is entirely unsurprising.

The call of the gospel, the call of the Hebrew Bible, is to love God, to love your neighbor as yourself. That is the threshold of both our religious experience and our democratic one — lowercase d. If we do not see each other as neighbors — as opposed to adversaries — then democracy doesn’t work. And I’d argue — and this is probably farther than Bishop Curry would want to go on this — I’d argue therefore, also, faith doesn’t work.

I’m sure there’s some theological complications there. But religion has justified enslavement. It has justified subjugation. It has justified imperialism. It has also inspired liberation, reform, creativity and justice. So I think this is fundamentally — meaning democracy and my view of my own faith — a human enterprise that should be undertaken and then ultimately judged by the degree to which we move into closer harmony with the ideals that come down to us in the religious tradition.

RNS: Bishop Curry, you gave a sermon on Jan. 6 last week where you talked about not only the presence of Christian symbols at the insurrection, but also your desire to reclaim Christianity. What are you hoping to reclaim it from, and what do think the work of reclaiming looks like moving forward?

Curry: The canon and I are on same page. The reality is we’re reclaiming what I would suggest is authentic faith relationship with God.

The Bible — the New Testament in particular — is so clear. In John 1, it says, “You cannot love the God who you cannot see if you do not love your brother or sister who you can see.” In Matthew 25: “If you did it to the least of these, who are members of my family, you have done unto me.” There’s a clarity, that love of neighbor — not engaging with the other as the other but as my brother, if you will — that is at the heart and soul of the teachings of Jesus of Nazareth. And if you peel back to what Moses was getting at in the Torah, in both Leviticus and Deuteronomy, and what the Hebrew prophets built on — that love of God, love of neighbor — is seen as the core and the essence of what the religious enterprise is about when God is at the center and when we are not.

That is the most succinct and beautiful definition of God — I want you to note this is an Episcopalian quoting the Bible — John Chapter 4, verse 7: “God is love,” period, exclamation point, no more debate, no more discussion about that point. Now let’s go and apply it. I happen to think that is what must be reclaimed, which is the authentic teachings of Jesus of Nazareth. What must be reclaimed is the authentic witness of the Hebrew prophets, the authentic witness that was pointing beyond self to the God, as I said, who is love. When we reclaim that, then we do not have Christian symbols used for hate, bigotry, putting anybody or any human child of God down, because they are a child of God.

RNS: The premise of your talk together at Vanderbilt is that religion can be a source of unity and good for society. Where are you seeing those sources of unity, the circumventing of division and rancor that have been so clearly on display over the last few years in religious contexts?

Curry: They are in every community.

There are food banks and food programs and hunger advocacy programs. … There are local urban ministries, rural ministries, that attempt to both serve those who are in need, but also attempt to advocate for the abolition of the need for that need.

I’ve been part of coalitions that have brought together Christians of different persuasions — evangelicals, megachurch pastors, mainstream Christians such as Episcopalian, the Presbyterians — around issues of common concern, not for self-interest, (like) a child tax credit so we can make poverty history for any child in this country.

RNS: Religious people actually are making a difference in the landscape of our reality. It goes unnoticed most of the time, because it’s normal. It’s what they do.

Meacham: I take hope from everything the bishop said, from what Edmund Burke called “the little platoons of people.”

My model for Christian witness, biblical witness in the public arena, is John Robert Lewis. He told me for years that he was on that bridge in Selma because of the Bible. That’s not because he was a Democratic congressman — the partisan label doesn’t apply here. It was about using religious witness, religiously inspired witness, to realize the promises of a document — the Declaration of Independence — which is at once secular and theocentric.

We’ve lived in tension with religious imagery, religious faith, since the beginning, and I really believe that because it is an ambient force in the life of the nation, because it’s an ambient force in the lives of so many of its citizens, that we don’t have any choice but to try to manage and marshal that feeling. To more fully realize the promise of that declaration. You cannot legislate religion out of the public square; neither should it be exalted.

RNS: There are people who advocate for an even brighter line between religion and politics — something closer to the system used in France — because religion is simply too destructive of a force. But you’re arguing that not only should one not attempt to create that brighter line, one arguably couldn’t, yes?

Meacham: Totally. My perhaps overly facile way of putting it — but I believe it — is we must separate church and state, but we cannot and arguably should not separate religiously inspired principles from our political life. I think church and state and religion and politics are four different things.

Meacham: It goes to what motivates a citizen. It’s much easier to listen to a sermon from a sinner than a saint, which is a good thing given the relative proportion of the two in the population. What is the person’s incentive? To just simply say “do the right thing because it’s the right thing” is … I don’t see that as particularly effective. So you try to incentivize it. And religion, I believe, creates an incentive that if you are doing the right thing, you are in accord with a tradition that, at its best, is about the other and not yourself.

RNS: Bishop Curry, RNS has covered your participation in protests, and it would seem you hold a similar position. But how do you envision navigating that intersection of faith and politics or the separation of church and state?

Curry: The professor is right. I eventually became ordained because … At the time I didn’t use the language of a sense of call, but that was what was going on. Yet, I was also headed toward a trajectory of the possibility of law school and going into government service. Now, I can tell you the same Michael Curry was going to go either way. Part of that reason for going into public service is I was raised by folk who basically said that part of your job as a Christian, as a person of faith, as our child — if you want to strip all that away. As like my daddy used to say, “The Lord didn’t put you here just to consume oxygen. You are actually here to contribute, to make a difference. Now you figure out how you’re going to do that.” And daddy used to say, “I don’t care what world of endeavor you enter into, but how you do it.”

So if Michael Curry had become a politician, the motivation for doing it was going to be this faith that was in me, that was given to me. I happened to become a preacher, a clergyperson. (But) it’s the same motivation, the drive. It’s the reason I get up in the morning.

RNS: But when religion seeks to dictate itself as the way in society, that wall of separation must exist — so all of us can have freedom of religious expression, so none dominates the other. What did (Meacham) say? There are four of them, and those four are very different. They all have their place. Church and state must be separated. But faith, in the person, can’t be. It’s impossible.

Meacham: It’s like trying to separate economic interests — you just can’t. So instead of pretending somehow that we can, and thereby creating frustration, I say just walk through the front door and just say, “Look, we’re all complicated creatures. We come to the public arena, we step out of our houses, we bring, as the bishop was saying, our family background, we bring our partisan inclinations, we bring our geographic inclinations and a lot of us bring a certain religious inclination.”