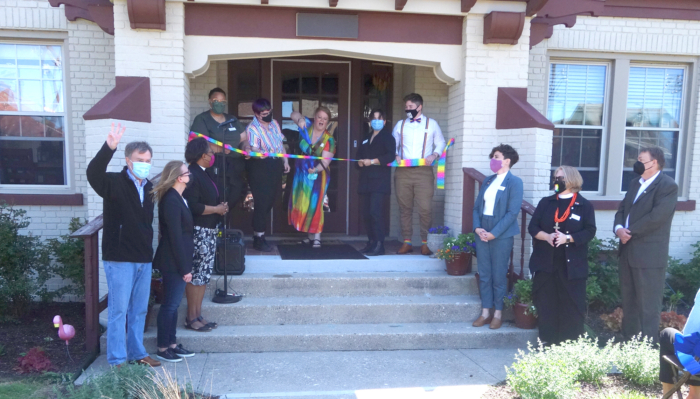 [Diocese of Indianapolis] Even before the ribbon was cut to officially open Trinity Haven, Indiana’s first residential facility for LGBTQ youth and young adults who are at risk of homelessness, two people were living in the house.

“As soon as we announced our opening date, young people began contacting Trinity Haven,” says Leigh Ann Hirschman, a member of Trinity Episcopal Church, Indianapolis and founding president of Trinity Haven’s board of directors. “Because they knew they would be imminently homeless. So, our opening is something to celebrate, but it has also been poignant to see how real this is; to see this need and to put faces on the need, and to watch the project move into reality.”

Trinity Haven’s road from idea to reality was a long one, beginning in 2016 when Trinity’s new rector, the Rev. Julia Whitworth, convened a discernment committee to determine the best use of an empty house the parish owned, and culminating on April 30 with the opening of an entirely different building. The journey was a sadly illuminating one.

“In the course of that work we learned that LGBTQ youth homelessness is an invisible crisis in Indianapolis,” Hirschman says. “Forty percent of all homeless youth identify as LGBTQ. Sixty-eight percent say that family rejection of their gender identity or sexual orientation is a major reason that they are homeless. Moreover, we learned that there are LGBTQ youth who are sleeping on park benches, in doorways, and on city buses trying to stay warm and safe.”

Whitworth remembers when the committee brought the possibility of opening a home for LGBTQ youth to the parish in 2017. “These folks barely batted an eye in saying this was the thing to do,” she says. “As a priest, the story of Trinity Haven has been the story of helping people embrace a call in their lives that they didn’t see coming.”

When it became clear that Trinity could not use the house it owned for the project, the parish provided a $500,000 loan to purchase another house nearby, as well as $50,000 in donations. Over time, parishioners contributed an additional $200,000. The project also received grants from Impact 100 of Greater Indianapolis and the United Thank Offering (UTO).

“In those initial days, they had the courage to collaborate and move beyond just Trinity Church and really to develop a network of support,” says the Rev. Jeff Bower, associate rector for stewardship and community engagement at St. Paul’s, Indianapolis, who became involved in the project early on, eventually becoming a member of the board of directors. Grants from the Faith & Action Project at Christian Theological Seminary and Lilly Endowment were also essential, he says.

The Diocese of Indianapolis assisted by naming Trinity Haven a cooperating ministry. The designation allows Trinity Haven to purchase staff health insurance and other benefits through the diocese. Indianapolis parishes, including All Saints, Christ Church Cathedral, Church of the Nativity and St. Paul’s, have all provided support and leadership.

Trinity Haven offers a transitional living program at the Trinity Haven house, which provides up to 24 months of housing, stabilization assistance, support services, independent living skills, case management, and care coordination for residents of ages 16-21, and a host homes program, which provides an average of 6 months of housing with a host family and intensive case management for ages 16-24.

“This is unfortunately a huge need in our community, and as an openly gay married white male, I realize that my life might have been very different had I come out in my adolescent years,” Bower says. “Now I’m 60 years old, but had I come out at the time that I was 15, 16, 17, I’m not quite sure that I wouldn’t need a place like Trinity Haven. So, it’s been one of my passions to be a voice and an advocate for youth to have a safe place and environment where they can grow and flourish and really be able to advocate for themselves. That’s what Trinity Haven is about: allowing kids to live into full potential as loved by God, and to shape a different narrative.”

Trinity Haven will continue to have a close relationship with Trinity Church but the facility is not a religious one. “It is important that these young people understand there are no religious requirements because unfortunately, so many of them have experienced mistreatment in the name of religion,” Hirschman says.

Whitworth sees the creation of Trinity Haven as an opportunity to exemplify a more loving brand of religion. “We live in a state that has been historically inhospitable, abusive and damaging to LGBTQ people,” she says. “And much of the hatefulness stems from poor religious teaching and religious malpractice that distorts the teachings of Jesus in a way that leads a parent to expel their child because of who they are and who they love. To have the opportunity not just as Trinity Church, but the entire diocese to paint a different view of Christians and a different way of being the church is so powerful and so important, and it feels like an incredible privilege to live into our gospel.”

Trinity Haven is now its own independent 5013c, but its founding institutional relationships will remain in place. Trinity Church’s rector will have a seat on the board, in addition to two seats for church members and a seat for the Diocese of Indianapolis.

“It has been a goal of the church and it has been a goal of mine personally to make sure that this project, once incubated and stabilized, is led by people who reflect the identities of the youth in the house,” Hirschman says. “It is so gratifying to see that our crackerjack staff is now leading this organization and walking a journey with the residents of the house. … The house now feels like a happy home. The staff are co-creating a community with the residents.”

But Whitworth doesn’t want to stop there. “I have had a dream from the get-go that we could create a model that’s replicable for other churches in other parts of the country. We have learned so much, and once this is thriving in the way that we imagine it will be, we hope that the story of Trinity Haven can be an inspiring one for other parishes who are looking to use their properties in a way that is life giving for their communities.”

Now through May 31, all donations to Trinity Haven will be matched, up to $25,000. Donate online.