The Rev. Rita Powell and others from the Episcopal Chaplaincy at Harvard offer an impromptu blessing as they begin assembling their “Sacred Tent” in August 2020. Instead of the traditional four posts that are blessed at the laying of a church cornerstone, four people were living pillars representing the living church. Courtesy photo

[Diocese of Massachusetts] As colleges and universities begin this unique school year in the face of unprecedented and changing challenges, campus ministers in the diocese are learning how to safely minister to their communities and anticipate special needs that both students and staff will have as they begin a new school year during a pandemic.

The Rev. Megan Holding, who serves as the Episcopal chaplain at both Boston College and Northeastern University, described in an interview how the pandemic is affecting the form that campus ministry takes, saying that while the past five months have been a good opportunity to experiment with ways for campus ministry communities to gather online, her core mission remains the same.

“The substance of [campus] ministry has always been to create community — to create space for people in this phase of life to reflect and think through issues or think through ways in which they are growing or being called to create meaning in life,” Holding said. “That can still happen. We can do our best to be a constant factor or a constant gathering opportunity.”

Holding emphasized that college campuses are not isolated from the broader contexts in which we are all living — such as the struggle for racial justice and political discourse, not to mention the pandemic itself — so continuing to provide this safe space for students is more important than ever.

“One of the things we talk about in campus ministry is that this is a place where students are not assessed in any way,” Holding said. “They can bring all of who they are and talk through what it is that we’re living through and have a place where they can go deeper and discern what’s stirring in them and where they can discern their own response.”

Holding also noted that though students may first come to mind when one thinks of campus ministry, there is also an important role for campus ministries to support faculty and administrators as they try to teach, mentor, guide and form when the communities they have been a part of seem so changed.

“I think relationships and communities have shifted when people are apart, and they’re going to have to re-shift when people are together again,” Holding said. “I do anticipate that the transition back to school is going to be different [from] just about every other year because, for those students for whom school had become a familiar routine, it’s going to look incredibly different.”

The Rev. Thea Keith-Lucas, who is the Episcopal chaplain at the Lutheran Episcopal Ministry at the Massachusetts Institute of Technology and was recently appointed interim chaplain to the institute, said in an email that though campus ministers long to have in-person experiences, she has been amazed at how strong their spiritual communities have remained, even though all of the programming for MIT’s Office of Religious, Spiritual and Ethical Life has to take place online for now. 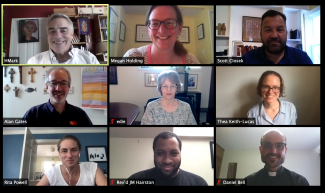 Campus ministers in the Diocese of Massachusetts met in late July via Zoom with Bishop Alan M. Gates, the Rev. H. Mark Smith and the Rev. Edie Dolnikowski to check in about plans for the new school year. Courtesy photo

“I’ve been amazed at how strong our community still is, with laughter and prayer and real listening to each other, even over a Zoom call. I hear the same thing from all our chaplains at MIT — Jewish, Muslim, Hindu and more,” Keith-Lucas said. “Spiritual communities, even virtual ones, are a solid anchor for young adults when everything else in their world is in flux. We offer gentle, nonjudgmental spaces where they can make sense of their experiences: the challenges of isolation, health risks and uncertain futures, and the rare blessing of time to discover who we are and what God is calling us to do.”

The Rev. Dan Bell, the priest-in-charge at St. Mark’s Church in Burlington, serves as chaplain for the Protestant Chaplaincy at Tufts University. He spoke in an interview about the need to check in with students to see how they are doing, particularly in the current contexts.

“[Students] have had a summer like no other. Plans have been disrupted, a lot of their hopes and plans for the fall have been either completely dashed or have been really altered in profound ways,” Bell said. “It’s going to be really important for us as chaplains to spend time connecting one-to-one with students and hearing about what are their hopes and their fears, and also, what’s bringing them joy right now and what might they feel excited about doing this year and what are they passionate about, because this pandemic doesn’t mean that all of the other issues in the world are on hold, we know that for sure.”

The need to provide a safe space to explore the “big questions,” and to acknowledge the real loss and grief that people are feeling right now is more important than ever, Bell said, especially when it feels like there is so much uncertainty in terms of the future.

“I think that’s one of the gifts of being a campus minister or being a chaplain in any setting, [that] we get to be those people who go there, who name the loss and grief and say, ‘Yeah, this is hard and we don’t need to pretend that it’s not,’” Bell said. “I don’t think that’s always the case when students are meeting with professors or other people on campus, so that’s what I really hope to embody, to be that caring, loving presence to support them.”

The Rev. Dan Bell set up an at-home prayer table for virtual Tufts University services this past spring. The Protestant student community at Tufts has the tradition of lighting candles around the altar during the Prayers of the People, and they continued that tradition over Zoom, with people sharing prayers as Bell lit candles in his apartment on their behalf. Courtesy photo

Bell said that while he’s sorry not to be able to spend in-person time together with students after chapel services in the same way that they did pre-pandemic, he hopes there will still be fun times and good opportunities to connect and grow with one another, and that this time presents some unique opportunities for campus ministry.

One such opportunity is underway at the Episcopal Chaplaincy at Harvard University, which is working on a project funded, in part, by a $5,000 Episcopal Church campus ministry grant.

The grant was awarded in March as part of the Young Adult and Campus Ministry Grants, which provide funding for dioceses, congregations and college and university ministries that engage with young adults on and off college campuses.

The “Sacred Tent” project at the Harvard chaplaincy started before the COVID-19 pandemic as a way to experiment with creating a physical structure for worship that could be set up inside a bigger space, or even outdoors.

“The project became a concrete way of asking these very basic questions that I take to be kind of essential to what it means to be a young adult in the church,” the Rev. Rita Powell, who serves as chaplain for the Episcopal Chaplaincy at Harvard, said in an interview. “How do we make a home? What is the church? Where is the church? Is the church in the building or not?”

The chaplaincy was working on plans for the project when the COVID-19 pandemic hit, and rather than derailing it, Powell explained, the crisis only highlighted its importance. With in-person gathering in churches and other physical structures not possible in the same ways as before, they were no longer just speaking conceptually about how structures can hold us back.

“I think that this crisis really called the question of innovation and imagination to a really acute point, so it’s not, ‘Oh yeah, we should probably be thinking about a new way to be church’; it’s suddenly, ‘Oh, we have to,” Powell said. “I do feel that the work of innovation can somehow seem like a frivolity or an option, and my hope is that in this time we can realize that it is a really important stream of work in the life of the church.”

The structure that the chaplaincy is building is a wooden platform that will have three “doors” of sorts but no walls. In addition to using the structure for worship, the chaplaincy is thinking about other ways to creatively use this space, such as for small theater, dance or music performances. Not only does this make the chaplaincy more accessible to people who wouldn’t necessarily come to a church service, but Powell hopes that the project will also offer opportunities for collaboration and hospitality with other chaplaincies and congregations across the diocese.

“My hope for this project is that the freedom accorded the chaplaincy to create and to imagine and to play — that that freedom can be of service to the wider church,” Powell said. “That it [can] be somehow energizing or inspiring or a contribution at least to a larger conversation about the church.”