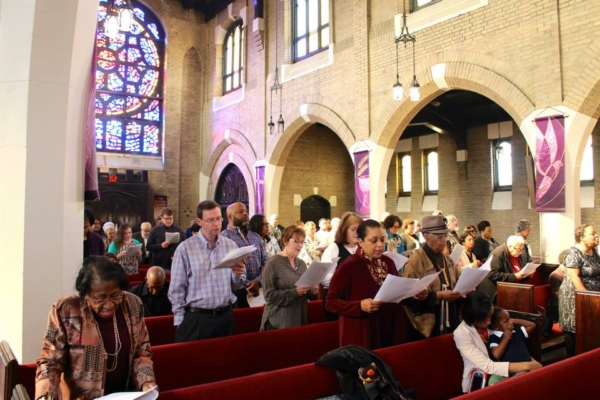 A Eucharist service celebrating the 150th anniversary of the Church of Our Merciful Saviour in Louisville, Kentucky, in 2015. Photo: Diocese of Kentucky

[Episcopal News Service] The Diocese of Kentucky’s ongoing efforts to rectify racial injustice, which have earned praise and support from the leadership of The Episcopal Church, now include a new initiative to repair mission churches in Louisville, where recent killings by police of African Americans have shined a spotlight on the systemic injustices they face.

The goal of West Louisville Now, a diocesan-led fundraising campaign launched on June 10, is to renovate two largely Black mission churches in Louisville’s West End, where for decades residents have struggled with unemployment, inadequate access to health care and social services, underfunded public schools and high levels of violence.

The two mission churches in the city’s West End are heavily engaged in mission outreach in the neighborhood. St. George’s Episcopal Church and the Church of Our Merciful Saviour “have always been in the forefront of providing community services,” Kentucky Bishop Terry White told Episcopal News Service.

Being mission churches means “the diocese is a part of these congregations,” White said.

“We played a role in these congregations’ buildings being in the shape that they are. … We are all one, and therefore we all have a responsibility to get these buildings in good shape.” 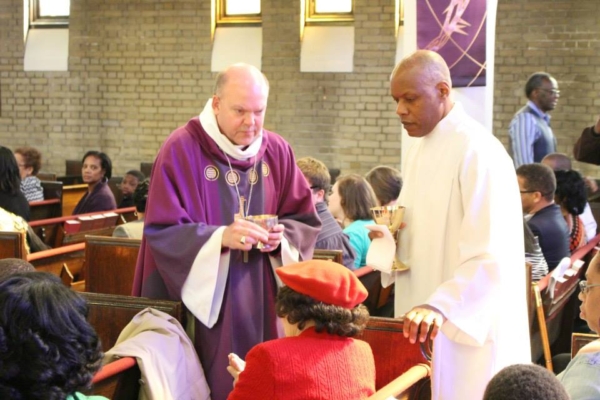 Kentucky Bishop Terry White, left, administers Communion at a service celebrating the 150th anniversary of the Church of Our Merciful Saviour. Photo: Diocese of Kentucky

As part of its racial justice work, the diocese has since 2015 supported an urban partnership in which wealthier parishes partner with mission churches to develop relationships and work on community service projects together.

The West Louisville Now initiative was sparked by the death of Breonna Taylor, a 26-year-old Black EMT who was killed in her Louisville apartment by police. Just after midnight on March 13, three officers executing a “no-knock” search warrant broke into Taylor’s apartment, exchanged gunfire with her boyfriend and shot her eight times.

More recently, on June 1, the city’s anger and grief were compounded when David McAtee – a 53-year-old Black restaurateur – was killed by police and National Guardsmen in west Louisville. McAtee was at his barbecue stand when police and the National Guard fired pepper balls into a group of people who had gathered on the street outside; police say McAtee then fired at them before they shot him. Both Taylor’s and McAtee’s deaths are under investigation by local, state and federal authorities.

The killings have drawn attention to Louisville’s West End, an area subjected to decades of redlining and destructive urban renewal projects that exemplify systemic racism, meaning the systems and structures designed to disadvantage African Americans. This led to a significant racial disparity in wealth, with many Black families unable to own homes and pass that wealth on to their children. A vicious cycle has taken root in the area; its drastically higher levels of poverty and unemployment (compared to the rest of the city) coincide with worse health outcomes and more violent crime.

With a renewed focus on systemic racism and police brutality after the May 25 killing of George Floyd in Minneapolis, Minnesota, and the deaths of Taylor, McAtee and others, White and his diocese considered how racial injustice might affect their own churches. Just as the people of the West End struggled with a persistent lack of resources, the diocese’s churches there were struggling to maintain their buildings, having far less pledge-and-plate income than churches in other parts of the city. The killings “refocused our attention on west Louisville, and the need for the church to be there” in a more active way, White told ENS. 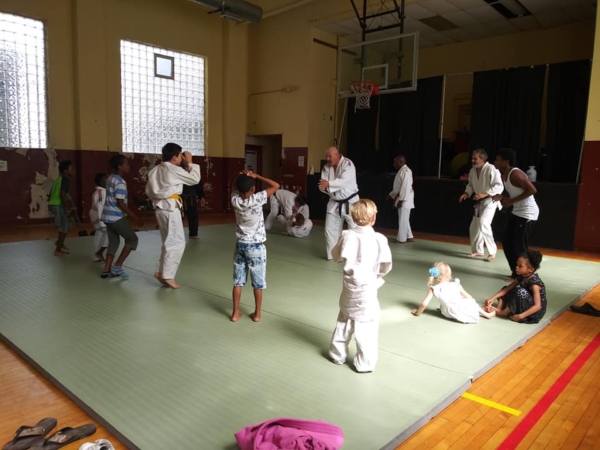 Founded in 1894, St. George’s is known for its feeding ministry, after-school program that offers kids activities like judo classes and basketball, and food pantry that serves over 2,000 people per year, said senior bishop’s warden Mary Jones Carter. Now 72, Carter has been worshipping at St. George’s since she was 16.

“It’s like being at home,” Carter told ENS. “I’ll put it this way – if you came to our church, you would want to come back. … We are small in stature, but we are larger than life when it comes to what matters.”

Carter has lived in west Louisville almost her whole life, and she says St. George’s is a much-needed beacon of hope – and help – in the area. She takes pride in the many services the church offers: making Christmas meal deliveries, giving out free clothing and distributing coats and blankets to homeless people on the streets.

Many of those offerings have been hampered or shut down by COVID-19, but even if the pandemic hadn’t struck, they would have had trouble operating because of the state of the building. St. George’s gymnasium, which houses much of its ministry work, desperately needs a new roof. Without it, the ministries that many in the neighborhood rely on won’t be able to continue, Carter said. 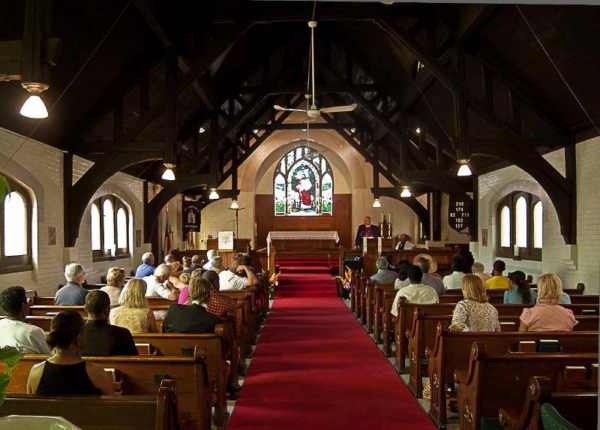 “There’s just no way,” she said. “We think of all the people that are going to lose out, because it’s really a food desert in that area, and our center and the other food pantries are really needed.”

Replacing the roof at St. George’s is one of the objectives of the West Louisville Now campaign, which aims to raise $200,000 for repairs at St. George’s and Our Merciful Saviour. The repairs will allow the churches to not only continue their mission work, but potentially expand it. Carter said that a program to teach young people home repair and other maintenance skills is in the works, but it can’t start until the building is repaired.

“We’re really excited,” Carter said. “We want that building to continue to stand because we are doing good works on that corner, and without the repairs, the good work will stop.” 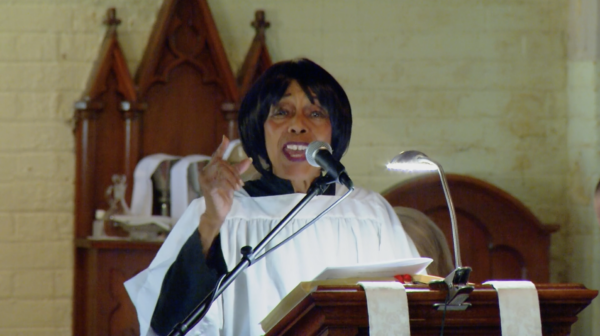 Our Merciful Saviour began as a Black congregation in 1865 and made history in 1916 by sponsoring the first Boy Scouts of America troop for Black boys. In recent years, it has received diocesan assistance and was made a mission church at the most recent diocesan convention. Its brick Gothic Revival building, a national historic landmark constructed in 1912, is now the only building standing on its block, said bishop’s warden John Harris. It was surrounded on three sides by a public housing project that is currently being demolished and rebuilt.

Before the demolition and COVID-19, the church offered vacation Bible school, a food pantry and financial assistance for those who needed help paying bills, said the Rev. Tom Miller-Price, the church’s priest-in-charge. The church has also hosted 12-step meetings and, through the urban partnership, has helped low-income people wash their clothes for free. But the parish hall needs a new roof and the sanctuary needs new heating and air conditioning systems, Miller-Price told ENS, and the West Louisville Now initiative aims to get that done. Harris hopes that by the time the housing complex is rebuilt, Our Merciful Saviour will reflect the new energy in the area.

“We’re just looking forward to a new beginning,” Harris said. “We want to be a beacon of light to others once the community starts coming back up again.”

The tragedies of Taylor’s and McAtee’s deaths exposed much injustice and suffering that had been ignored for too long, but also highlighted the need for ministries like St. George’s and Our Merciful Saviour’s, White told ENS.

“It helps us understand west Louisville, which is underserved by any measure that one would want to use in terms of community services. So for the church to be present there is vital. And now we’ve got even more mission work to do about racial reconciliation, dismantling [racist] structures and helping to bring justice and equality for all God’s children in that part of the city. So it’s been the most amazing connection amidst tragedy, the most amazing couple of weeks of my entire priesthood in terms of how these things come together,” White said.

The diocese’s racial reconciliation work had already been ramping up before the killings and protests. Over the past year, White has been working to set up a part-time urban missioner position to build on the work of the Louisville urban partnership program. For that role, he recently hired Valerie Mayo, currently a candidate for holy orders who will also serve as priest-in-charge at St. George’s when she is ordained.

“Her excitement about being a part of the work here is palpable,” White said.

And in early June, The Episcopal Church’s Executive Council voted to grant $150,000 each to the dioceses of Kentucky and Minnesota to continue their racial justice efforts. White said the diocese feels “supported and recognized and celebrated by the wider church through the Executive Council. … This really is a case where the wider church is also a partner with this.”

The diocese hasn’t decided exactly how the money will be spent, but it is separate from the West Louisville Now campaign, which is being allocated as the leaders of the two congregations see fit. Of the $200,000 target, $60,000 was given or pledged in the campaign’s first two weeks.