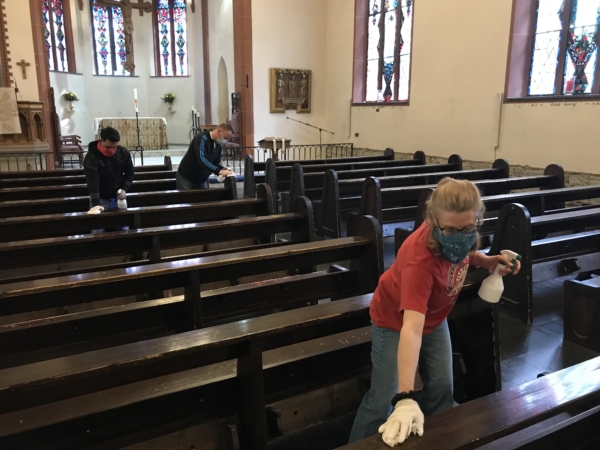 Parishioners of the Church of St. Augustine of Canterbury in Wiesbaden, Germany, disinfect the pews on May 8. Photo: Christopher Easthill

[Episcopal News Service] As the COVID-19 pandemic ravaged Europe in early March, the Episcopal parishes there were some of the first in The Episcopal Church to close. Now, some congregations of the Convocation of Episcopal Churches in Europe are resuming in-person worship.

Of the seven countries in which the convocation has a presence, Germany is the furthest along in the process of reopening churches – apart from the Republic of Georgia, which did not order churches to close, though many have done so anyway. In Italy, which suffered some of the worst (and earliest) devastation from the pandemic, churches will be allowed to hold worship services again starting May 18, while other countries like France and Switzerland are expected to keep them closed into June.

Germany has begun allowing churches to reopen over the past week with various restrictions by region, including limits on the number of people who can be in the building at once and the kinds of worship activities that can happen. The convocation has more churches in Germany than any other country: three of its nine parishes and four of its 12 missions are there. At least one of the German churches will resume in-person worship on May 10: the Church of St. Augustine of Canterbury in Wiesbaden, according to the Rt. Rev. Mark Edington, bishop of the convocation.

Edington has been stuck in Massachusetts since March, unable to return to Europe because of travel restrictions, but he told Episcopal News Service that the clarity of stringent government orders in Europe has prevented the confusion and mixed messaging many American bishops are dealing with.

“My role has, in many ways, been a much easier one than bishops in the United States because, in our context, the choice is not left to me or to leaders of churches as to whether or not a house of worship may remain open or must remain closed. We [were] simply closed by state order,” Edington said.

“So I’m very aware that my colleagues in the House of Bishops who are responsible for making the decisions in places where governors and mayors have been kind of all over the map – they have a really tough decision to make and they often have to just make [it] on their own, and I am not in that position.”

Edington’s office developed a set of guidelines and a questionnaire that churches in countries that are relaxing restrictions must complete before he allows them to reopen. In addition to observing all local requirements, Edington has issued church-specific directions, for example, the passing of the peace is to be done without physical contact, and all coffee hours and other fellowship events must remain virtual. The Eucharist may be celebrated, but only the bread may be shared, and those distributing it must sanitize their hands immediately before doing so.

The convocation has shared its guidelines with the Church of England’s Diocese in Europe, which operates Anglican churches in some of the same cities and has adapted the guidelines for its own churches. Some of its German churches are also reopening on May 10, while its churches in England are still weeks away from doing so. The United Kingdom now leads Europe in recorded COVID-19 deaths, surpassing Italy.

Edington is leaving other issues – like the practicality of using masks during services and questions about singing, which has been restricted in some cases because of concerns over increased transmission of the virus – to church leaders to decide in accordance with their local laws. 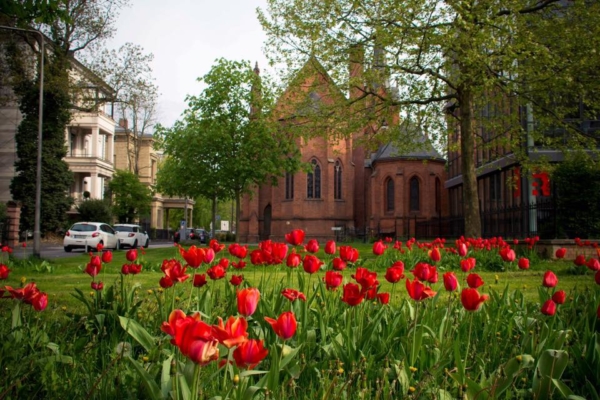 The Church of St. Augustine of Canterbury in Wiesbaden, Germany, plans to open its doors again on May 10. Photo courtesy of the church

St. Augustine’s in Wiesbaden, a city just west of Frankfurt, hasn’t held in-person services since March 8. When it reopens on May 10, ushers will seat parishioners at least 5 feet apart, in keeping with local rules. Normally, about 110 people come to a Sunday service at St. Augustine’s, but with the distancing requirements, only about 50 will be able to fit in the church. The Rev. Christopher Easthill, the rector, initially considered adding a Saturday evening service to accommodate everyone, but after surveying his parishioners, he found that only about 50 plan to attend in person on May 10. Many are staying home for now, including those at high risk. Easthill knows of two congregants who have had COVID-19; both have recovered. Members of the U.S. military stationed nearby, whose activities are still strictly regulated, may not return for a while either.

Anyone who wants to attend in person will be asked to wear a mask and sanitize their hands upon entering the building. There will be no handshakes and no passing of the collection plate, and single-use service programs will be used instead of prayer books. The Eucharist will be celebrated with ushers directing people to come up and receive the bread one by one. There will be singing, but not by the congregation or a full choir; a few singers in the choir loft will accompany the organist. 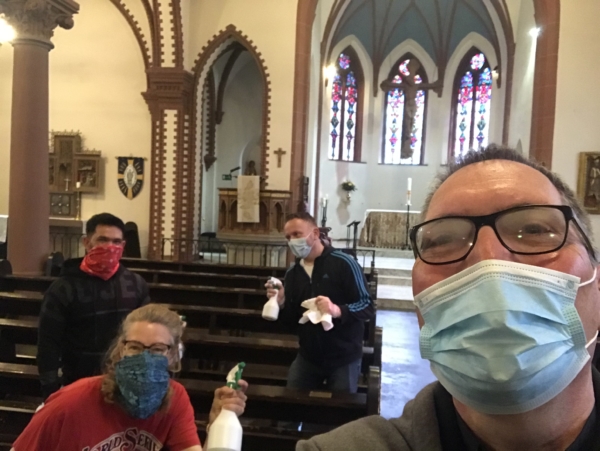 “I’m excited to be back,” Easthill told ENS. “The Zoom services we’ve done have been nice because I have seen the people but, nevertheless, only the little ‘Brady Bunch’ boxes on the screen.”

St. Augustine’s virtual gatherings have evolved from a bare-bones recording of Morning Prayer to include weekday services, Bible studies, coffee hours and trivia nights. Those have provided vital social connections for parishioners, and Easthill stressed that virtual programming will continue so that those who can’t come back yet – and those who might never come back – don’t feel left out.

“What we ought to do is make sure that we include these people – our normal congregation who can’t come. The second group we want to include … is all the other people who’ve popped up and started watching our online services, those ex-members who’ve moved back to the States, back to the U.K., and have enjoyed watching it, and people who haven’t been members before but have found us,” Easthill said. “So we’re going to have a hybrid service. What we do on Sunday will also be broadcast live.”

The Church of St. Boniface in Augsburg – near Munich in southern Germany – is tentatively planning to reopen on May 10, although what that might look like remains uncertain. The congregation, which meets in a Lutheran church, is small but dedicated, said the vicar, the Rev. Lutz Ackermann.

About 15 people would come on a typical Sunday “during normal times – if you can remember, there once were normal times! It seems so far away,” he told ENS. 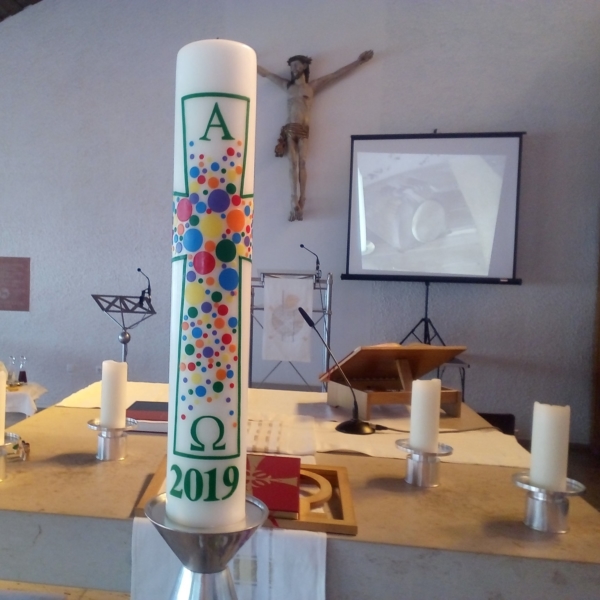 The Church of St. Boniface meets in a Lutheran church’s building. Photo courtesy of the church

Ackermann is “trying to meander through this labyrinth” of regulations, developing a plan that will abide by convocation guidelines, government restrictions and the policies of the host church. The church has been approved by Edington to resume in-person worship, but “we still need to think about it and work through the question [of] what works for us, in practical terms, in liturgical terms, in terms of the community.”

“To me, it’s not entirely clear that this will mean that we come back to something that feels very normal very soon. I would doubt it, actually.”

For now, Ackermann will not celebrate the Eucharist and there will be no singing. Like Easthill, he is committed to continuing virtual worship regardless of reopening the church – partly because he has so few congregants that he isn’t sure any of them will be willing or able to return to church at the moment. Holding services on Zoom has been “actually quite a nice way [to gather] because it helps to make the service rather interactive with such a small group of people,” Ackermann said. “It feels very intimate.”

While Ackermann and Easthill are under no illusions of a return to normalcy anytime soon, they look forward to simply being able to share the same space with their parishioners.

“It’s very strange when you’re preaching just into a microphone, into an empty building,” Easthill said. “So I’m excited and looking forward to having some people back there in church with us again.”