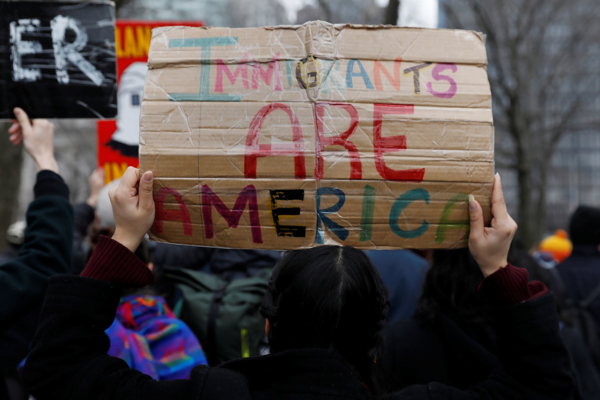 Activists and DACA recipients march up Broadway in New York, New York, during a 2018 rally to demand that Congress pass the DREAM Act. Photo: Reuters

[Episcopal News Service] The Episcopal Church is bolstering its advocacy in support of undocumented immigrants who were brought to the United States as children, with the U.S. Supreme Court poised to rule on the fate of a federal program that has protected about 700,000 of them from deportation.

A ruling could come any day on Deferred Action for Childhood Arrivals, or DACA, an immigration policy implemented in 2012 by the Obama administration. DACA granted conditional protection to this group of immigrants, sometimes referred to as DREAMers, many of whom are too young to remember their native countries. The Trump administration ordered an end to the program in September 2017, arguing that these immigrants’ legal residency status needs to be addressed by legislation, not executive action.

“The Episcopal Church has long supported a path to citizenship for undocumented people brought to the United States as youth. That commitment to legislative protections for DREAMers remains solid as ever,” said Rushad Thomas, a policy adviser with The Episcopal Church’s Washington, D.C.-based Office of Government Relations.

All rulings for the Supreme Court’s current term are due to be handed down by the end of June. During oral arguments in November, members of the court’s conservative majority appeared willing to agree with the Trump administration that it was justified in ending the protections.

Even if the court rules in favor of the Trump administration, church officials and Episcopalians around the country plan to build on their ongoing advocacy for a legislative solution that will reflect the biblical call to love your neighbor and welcome the stranger. The Office of Government Relations held a virtual action day in April, when Episcopalians contacted their lawmakers and asked them to support DACA recipients. Another action day is planned for early June. The office also conducts nonpartisan advocacy on Capitol Hill through regular contact with the staffs of lawmakers from both parties.

Episcopal Migration Ministries also has been active on the issue, joining the Office of Government Relations to host a webinar on April 16 that featured a panel discussion with three Episcopalians who have received DACA protection. The webinar began with a prayer and reflection from the Rev. Nancy Frausto, a DACA recipient who serves as associate rector of St. Luke’s Episcopal Church in Long Beach, California.

“This is a personal issue for me and for the many, many other young people who are desperately fighting for their lives at this moment, and praying and hoping,” Frausto said.

An estimated 3.6 million undocumented immigrants were brought to the United States before they turned 18, according to the Migration Policy Institute. They are called DREAMers after the DREAM Act, legislation that has been pending since 2001 to offer permanent status to some of those stuck in legal limbo, including students.

DACA recipients are a subset of DREAMers. Active recipients of the protections and those with pending renewals totaled 675,000 as of Dec. 31. The program didn’t give recipients a path to citizenships, but they were allowed to work in the United States without fear of being deported and must apply for renewal every two years.

Renewals are still being processed amid the pending legal challenges to the Trump administration’s move to end the program. Some immigrant advocates, including the Diocese of Los Angeles’ Interfaith Refugee and Immigration Service, are encouraging DACA recipients to apply for renewal now, because it might help their cases in the future if the Supreme Court rules against the program.

A ruling against DACA could have ramifications for efforts in the United States to fight the COVID-19 pandemic. An estimated 27,000 health care workers are DACA recipients, and some of those workers filed a supplemental brief in March with the Supreme Court opposing efforts to terminate the program.

Popular opinion has generally sided with efforts to allow Frausto and other DREAMers to remain in this country if they meet certain criteria, as outlined by the DACA program. Such policies and proposals occasionally have drawn bipartisan support in Congress as well, and sometimes even from President Donald Trump, whose administration otherwise has sought to reduce both illegal and legal immigration to the United States. Even so, passing immigration reforms historically has been an uphill battle.

The Episcopal Church’s General Convention has long supported humane immigration policies, most recently in July 2018, when the 79th General Convention met in Austin, Texas. One resolution adopted by bishops and deputies reaffirmed the church’s call for comprehensive immigration reform and singled out the plight of DACA recipients. It voiced support for “passing of federal legislation that presents a pathway to citizenship for undocumented youth and young adults known as DREAMers.” 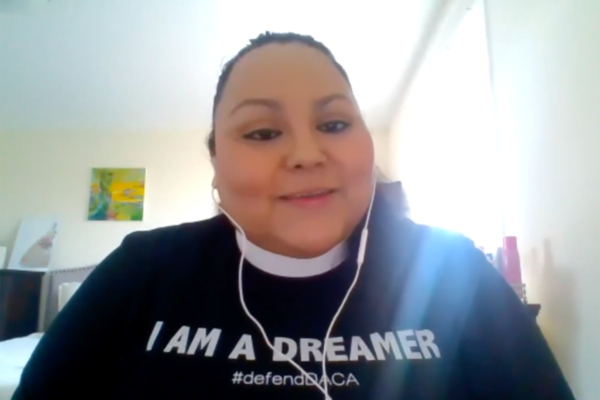 The Rev. Nancy Frausto, associate rector at St. Luke’s Episcopal Church in Long Beach, California, participates in a webinar about the immigration program known as DACA hosted April 16 by Episcopal Migration Ministries and the Office of Government Relations.

Frausto, during the EMM webinar, invoked the words of Episcopalians’ Baptismal Covenant in urging more people of faith to join in those efforts.

“For those who believe in the power of God’s love and have vowed to fight for the dignity of every single human being, we need you,” Frausto said. “We need people to stand on our side to fight for our right to stay in this country, our country.”

One way Episcopalians can get involved is by joining the Office of Government Relations’ Episcopal Public Policy Network, which sends action alerts to its members and coordinates advocacy on issues such as immigration and DACA.

“Regardless of how the Supreme Court rules in the coming weeks, you can be sure The Episcopal Branch of the Jesus Movement will continue to stand with DREAMers and continue to advocate for a just legal settlement for them and their families,” Thomas told ENS by email.