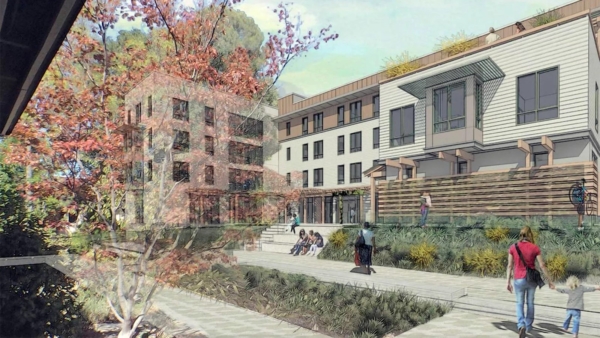 [Religion News Service] Faith congregations across California are responding to the state’s housing crisis by sharing their parking lots with people living in their cars, providing mobile showers for the homeless and joining their neighbors in calling for rent control in their communities.

But another form of housing advocacy has been taking place among spaces of faith.

A number of churches are exploring ways to build affordable housing on their own land. It’s what pastors and other leaders are referring to as YIGBY, or “Yes in God’s Backyard.”

The acronym is a play off of the term NIMBY — short for “Not in My Backyard” — a term often used to describe community pushback against affordable housing or other similar projects.

“Jesus very clearly tells us to keep our eyes open to those who are in need,” said Clairemont Lutheran Church pastor Jonathan Doolittle.

California is home to the 10 least-affordable major markets in the nation and is near the top in cost-burdened households — second among homeowners and fourth among renters, according to a January 2019 report from the Public Policy Institute of California. The median home price in California is $549,000. The median rent is $2,800. 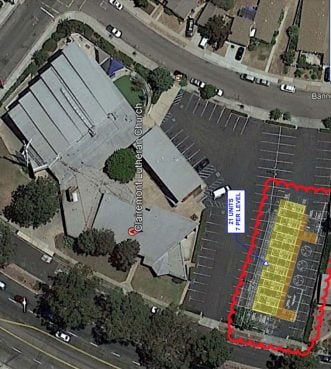 About four years ago, Clairemont Lutheran Church members in San Diego decided they needed to do something about the housing crisis affecting their community.

The church was part of an interfaith shelter network in which congregations open their spaces for a certain length of time to house families in crisis. During this time, churches host families for two weeks while they get back on their feet.

The families rotate to other churches in the network, but once that cycle runs out, they may have nowhere else to seek shelter, Doolittle said.

As the church made plans to redevelop its fellowship hall, Doolittle said they sought to include affordable housing as part of that project. The church proposed building a number of affordable apartments on part of their current parking lot.

Church leaders thought the affordable housing component could also speed up the approval process for the project. Instead, they encountered more roadblocks including parking restrictions and costly environmental impact reports.

In San Diego, city code makes it a requirement for churches to have a certain number of parking spaces based on the number of people who can fit in the sanctuary.

The renovation of the church’s fellowship hall is underway, but the housing element is on hold for now.

However, that could soon change.

On Nov. 6, a subcommittee of the San Diego City Council voted in favor on an item that would make it easier for faith communities to get approval to build housing on their parking lots. Under this plan, excess parking spaces could be used as a location for housing. The City Council will consider the item at a future meeting.

Clairemont Lutheran Church plans to jump-start its housing efforts next year, hoping to put between 16 and 21 apartments on its parking lot.

To housing advocate Tom Theisen, the city’s move is a step in the right direction.

Theisen — a retired attorney and former chair of the Regional Task Force on the Homeless — is part of the San Diego YIGBY working group that helps activate under-utilized faith community properties suitable for residential units.

He says the YIGBY group shows how an abundance of church land across the county can help address the region’s housing shortage. Theisen said that in the past, individual churches were going to the government proposing small projects of 15 to 20 units.

“If we look at this from the perspective of ‘How do we help the churches help the needy in their community and look at it countywide?’ we’re talking hundreds of potential housing units, possibly thousands,” Theisen said.

Theisen estimates construction costs could be “primarily if not exclusively” paid through income coming in from the housing.

“The idea is to start building housing and start putting people in houses,” Theisen said. In Northern California, St. Paul’s Episcopal Church in Walnut Creek would like to open its affordable housing complex in December or January.

It’s called St. Paul’s Commons and will be a mixed-use development with community spaces operated by St. Paul’s Episcopal Church. It’s also where the nonprofit Trinity Center will have a physical space to serve people who are homeless.

The project will include 45 affordable apartments. The church leased its land to Berkeley-based developer Resources for Community Development, which used a property management company to perform background checks, call references and conduct interviews for apartment applications.

The development is taking over a single-family home where Trinity Center provided services to the homeless. The Rev. Krista Fregoso said they were already assisting people who were homeless and later thought, “What if we became a part of the solution, too?”

To Fregoso, “This is just one part of how we live out our faith. We hope to be a model for other faith communities who might see their property in a different way.”