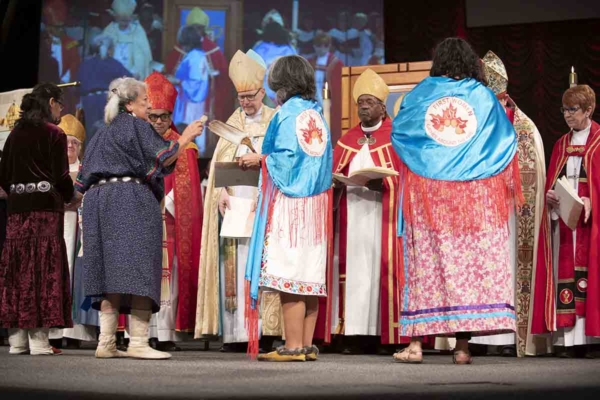 [Episcopal News Service] The Diocese of Arizona is stepping up its efforts to give recognition to the “People of the Land,” including by creating an Indigenous Peoples of Arizona Day, which churches in the diocese can celebrate in future years on the second Monday of October – the Columbus Day federal holiday.

The diocese’s 59th convention was held on the weekend after the most recent Columbus Day. An Indigenous Peoples Day was one of two resolutions approved to encourage greater acknowledgement of the 22 federally recognized Native American tribes in the state. The other resolution offered congregations specific language that can be incorporated into their services.

Across the diocese, “we don’t have a church that isn’t directly on or very close to traditional native land,” the Rev. Debbie Royals told Episcopal News Service in an interview. “We are pretty much guests on that land.”

Royals, the diocese’s canon for Native American ministry, is a member of the Pascua Yaqui, whose tribal land is in the Tucson area. She helped draft and submit the two resolutions that were approved Oct. 19, expanding on a commitment the diocese made in 2016 to acknowledge the “traditional custodians” of church land.

Royals’ voice wavered as she grew emotional describing the joy she felt when her diocese wholeheartedly backed both resolutions, signifying what she saw as “a big step” toward increasing the visibility of Native American members and their culture in the church.

“I sat with such a feeling of, for the first time in my life … that I’d been seen, that I was no longer in the shadows,” she said.

The resolution adopting Indigenous Peoples of Arizona Day doesn’t mention Columbus Day specifically, though the date is the same. It will be set aside as “a day of prayer and reflection to understand our shared history and continue along a path or reconciliation.”

“We wanted to have this as a resource for the diocese,” said the Rev. Ben Garren, the Episcopal chaplain at the University of Arizona in Tucson who drafted the resolution with Royals. Both serve on the diocese’s Council for Native American Ministries.

The resolution invokes the words of the 26th Presiding Bishop Katharine Jefferts Schori, who during her 2006-2015 tenure urged the church to take up the work of healing and reconciliation after generations of injustice and oppression toward Native communities.

The Diocese of Arizona, by inviting congregations to commemorate indigenous history and correct the historical narrative, is fulfilling “the work that General Convention already called us to do along these lines,” Garren said, and he would welcome efforts to organize similar commemorations in other dioceses or churchwide. “It is readily transferable to any other diocese.”

Royals on Oct. 30 discussed the two resolutions with The Episcopal Church’s Indigenous Ministries Advisory Council. The Rev. Brad Hauff, the church’s missioner for indigenous ministries, told ENS by email that he found the Diocese of Arizona’s example encouraging.

“We as a church need to do all we can to promote awareness of indigenous people, our presence, our painful history and our hopes for a renewed and empowered future,” said Hauff, who is Lakota. “There are still many people, within the church and the general population of our country, who do not know us other than through the distorted lenses of the Columbus myth and Manifest Destiny, and this needs to change.”

In fact, an increasing number of states, cities and churches in the United States are choosing to celebrate Indigenous Peoples Day, often in place of Columbus Day as part of a growing re-examination of the legacy of Christopher Columbus’ journeys to North America.

The Italian explorer, hired by the king and queen of Spain in the late 15th century, often receives credit for “discovering” America in 1492, even though he never set foot on mainland North America, and the continent already was home to millions of people whose ancestral history dates back around 15,000 years. Historians also note Columbus’ record of brutal mistreatment and enslavement of many of the land’s indigenous inhabitants.

“Columbus was a hired gun. The Spanish crown needed someone to advance its interests. Like a gun, Columbus, as a representative of power, quickly became an agent of violence,” the Ojibwe author David Treuer writes in “The Heartbeat of Wounded Knee,” a history of Native America published earlier this year.

The Episcopal Church’s General Convention at least since the 1970s has expressed support for Native American land claims and human rights, and a resolution in 2009 explicitly repudiated the Colonial-era Doctrine of Discovery, which purported to give Christian explorers the right to claim lands they “discovered” and convert the people they encountered.

Another resolution, from 1997, called on the church to “take such steps as necessary to fully recognize and welcome Native Peoples into congregational life.”

That was the spirit of the other resolution approved at the Diocese of Arizona’s recent convention. It encourages congregations to fulfill a 2016 diocesan measure that urged them to routinely acknowledge their communities’ indigenous people, such as at annual meetings, on websites, in worship bulletins and during worship services.

The new resolution offers language that can be incorporated into the opening of meetings. It also offers suggested insertions for the Prayers of the People written in the styles of Forms I through VI. “Help us to honor the knowledge of our indigenous neighbors, to listen through them to your call to renew the life of the earth and to live together as your people,” reads one of the prayers, for Form IV.

Royals and the Rev. David Benedict Hedges, rector at St. Michael and All Angels Episcopal Church in Tucson, drafted the prayers with input and feedback from the diocese’s Council on Native American Ministries, whose 30 or so members are a mix of Native American and non-native Episcopalians.

At church meetings, leaders are invited to identify “the traditional custodians of the land” by their tribal name and share brief words of respect. In one of the openings suggested by the resolution, the meeting leader acknowledges the local tribe and says: “They have occupied and cared for this land over countless generations, and I celebrate their continuing contribution to the life of this region.”

Such statements are intended to be spoken by non-native participants. The resolution notes that a tribal member, if present, instead may personally welcome the gathering to the land.