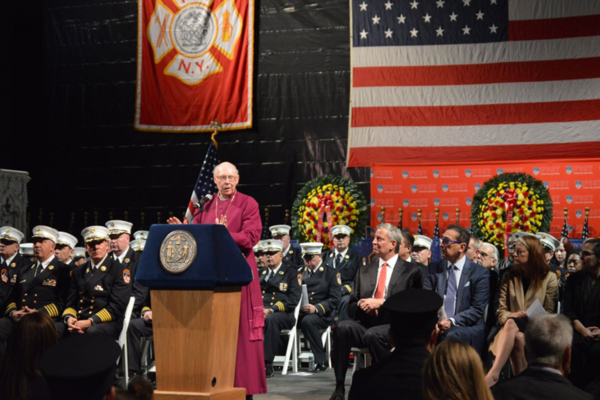 [Episcopal News Service] The Cathedral Church of St. John the Divine hosted the New York City Fire Department’s annual memorial service on Oct. 10, and with a fire cleanup crew’s scaffolding serving as part of the backdrop for the ceremony, the Rt. Rev. Clifton Daniel, the cathedral’s dean, stood to offer a brief welcome.

Daniel noted that city firefighters had responded to significant fires at the cathedral twice in the past two decades, most recently in April on Palm Sunday. “On behalf of a grateful cathedral and a grateful city, thank you,” he said.

The fire on April 14 prompted a sudden evacuation of the cathedral, where the 9 a.m. Palm Sunday service had just ended. The 11 a.m. service was moved outside as smoke billowed from the building. Church leaders initially expressed relief that no one was hurt and that most of the damage from the fire was confined to an art storage room in the cathedral’s basement crypt.

The fire’s severity paled in comparison to the damage sustained in a terrifying blaze the following day at Notre Dame Cathedral in Paris, but as with Notre Dame, recovery at St. John the Divine has been a slow, gradual process that still is disrupting some cathedral operations six months later.

St. John the Divine canceled its popular St. Francis Day Festal Eucharist, which typically draws more than 2,000 pets and their owners to celebrate the Feast of St. Francis of Assisi. Even so, the cathedral was able to hold a St. Francis Day Fair on Oct. 6 outside, with pet blessings, a costume parade and children’s activities.

Hosting the Oct. 10 memorial service for firefighters “took on a special meaning,” the cathedral said in a Facebook post. “We saw firsthand their commitment, professionalism and respect.”

The Cathedral was honored to host the annual @FDNY memorial today. We're grateful for the sacrifices these brave people make every day, but the event took on a special meaning given that we're still in the midst of cleaning up from our Palm Sunday fire. pic.twitter.com/UwBbXkSzD7

Some artworks were damaged by the fire, but the continued disruptions primarily are due to the smoke. Right after the fire, crews cleaned everything below 10 feet to allow the cathedral to reopen quickly, but the greater challenge has been cleaning the walls, windows and ceilings above 10 feet.

“This work has required a great deal of flexibility, cooperation and patience on the part of staff, visitors, worshipers and the cleaning crews, as we moved services and adjusted public events to accommodate the needs of such an undertaking,” the cathedral said in an update for its fall 2019 newsletter. 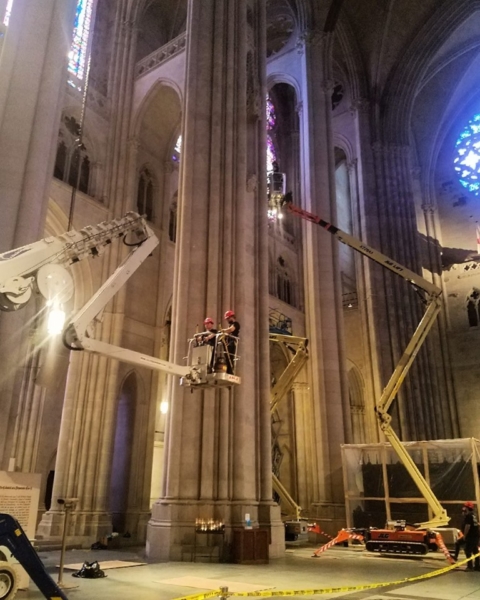 A Sept. 6 photo shared on St. John the Divine’s Facebook page shows crews cleaning the cathedral’s stonework after it was damaged by smoke from a fire in April.

Access to parts of the cathedral has been limited as workers from Maxons Restorations raise their lifts to clean the facility’s lofty heights. The scaffolding was brought in for the more complicated task of cleaning above the high altar.

The cleanup also has prompted some early closings and canceled services and disrupted the plans of the many sightseers who visit St. John the Divine to view its grand architecture. The cathedral, one of the world’s largest churches, began charging tourists $10 admission about two years ago, but it reportedly has reduced the price while renovations are underway.

The cathedral, which also serves as seat of the Diocese of New York, posts schedule updates on its website.

With several prominent areas of the cathedral’s worship space closed, including the high altar, great choir and crossing, Sunday services have been confined to the nave. Daily services are held in a smaller area known as the medical bay. The cathedral’s “Treasures of the Crypt” exhibition is also closed.

Its six pipe organs have been affected by the smoke as well. They must be taken apart and cleaned before they can be returned to use. Until then, a rented substitute will have to do. “We are blessed to have use of the finest electronic organ available,” the cathedral notes.

The cathedral is expected to be fully restored by next year. Daniel told The New York Times last month that he hoped to have the stonework cleaned in time for Christmas 2019, and attention will then shift to the pipe organs. The congregation anticipates being able to resume its full St. Francis Day celebrations in October 2020.

That is a relatively short timeline compared to what the congregation endured after a fire in 2001. The six-alarm blaze a week before Christmas Eve burned through the timbered roof trusses, destroying the north transept and severely damaging the Great Organ.

The damage required extensive restoration work, and the cathedral wasn’t fully restored until 2008.