Editor’s note: After this story was published online, leaders from St. Stanislaus Kostka Polish Catholic Parish announced the congregation had decided not to officially join the Episcopal Diocese of Missouri, citing property rights as a key factor.

In a survey of parishioners conducted Sunday, Aug. 11, 58 percent of St. Stanislaus’ members said they are in favor of affiliating with the diocese. That survey has led to continued discussions between St. Stanislaus and The Episcopal Church, with an update on the situation expected at any time. 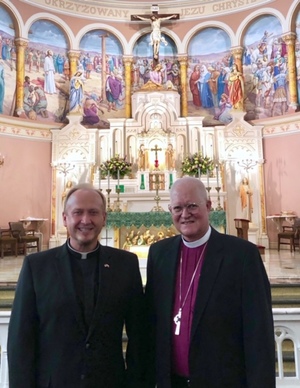 “There’s a natural attraction, a natural gravity to your model of being Catholic — it’s so natural,” said the Rev. Marek Bozek, pastor at St. Stanislaus. Bozek describes his parish’s members as “progressive traditionalists.” He says they are very traditional when it comes to liturgy, but also believe in the full inclusion of everyone at every possible level of the church.

“Many marginalized Roman Catholics have found a home at St. Stanislaus. They really are of kindred spirit,” said Bishop Wayne Smith, who welcomes the possibility of a union.

St. Stanislaus broke away from the Roman Catholic Church in 2005 following authority disputes with the Archdiocese of St. Louis. A legal settlement in 2013 allowed St. Stanislaus to become an independent Catholic church and affirmed the parish’s ownership of its church building and property in St. Louis’ Carr Square neighborhood.

Although they welcomed independence, the parish began seeking affiliation with other churches to be connected to a wider community and, as Bozek says, a priest needs a bishop. Bozek and Smith began discussing a possible union in 2013. Smith issued a letter to the diocese at that time:

“On the face of it, the Diocese and St. Stanislaus have many things in common — in sacramental practices, in Catholic identity, in commitment to the marginalized, in having cherished heritages.”

The letter goes on to explain The Episcopal Church’s existing connection to St. Stanislaus through the Union of Utrecht, of which both churches are in full communion:

“The Union of Utrecht consists of churches in 10 European nations with about one half-million members in all and, like the [Anglican] Communion, it preserves the historic episcopate and recognizes the seven sacraments of the Western church. It recognizes the three Catholic orders of ministry. The Union regards The Episcopal Church of the Anglican Communion as its representative in the United States.”

Since those initial discussions six years ago, members of St. Stanislaus have considered all their options, including unions with other churches. Smith said he felt it was important to give the parish time and space to make its own decision.

Smith met with Bozek and lay leaders of the parish earlier this month — before the survey — to answer questions. He assured members their parish would be able to maintain its own traditions or incorporate those of The Episcopal Church, if they so choose. (Canon I.16 of The Episcopal Church provides for a parish to come into affiliation with one of its dioceses and yet retain its own liturgical practices and rites.) Under the union, the bishop of Missouri would make regular visitations, provide oversight for the congregation and clergy, and assist any members seeking ordination.

“I’m so very grateful to Bishop Smith in his position. He’s been so gracious to us,” Bozek said. “He’s going out of his way to make sure we can keep our identity as a Polish Catholic church. I truly appreciate his efforts.”

Bishop Smith has notified the Diocesan Standing Committee, Bishop Mike Klusmeyer of West Virginia (liaison to the International Old Catholic Bishops’ Conference) and Presiding Bishop Michael Curry about this possible union. For the affiliation to be official, Smith would make an application to the presiding bishop on behalf of St. Stanislaus to request permission for the union.

Whether St. Stanislaus officially affiliates with the diocese or not, the parish will be playing a major role in the diocese’s near future by hosting the ordination and consecration of its 11th bishop on April 25, 2020. The Transition Committee chose the sacred space for the event because of its size, accessibility and inclusiveness to all. The church shares grounds with the Polish Heritage Center, which will host a celebration reception following the service.

Please send any comments, questions or concerns about this possible union to communications@diocesemo.org.

– Janis Greenbaum is the Diocese of Missouri’s director of communications.