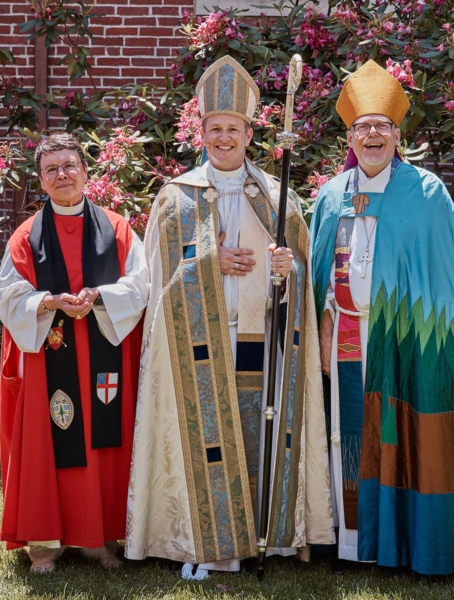 Presiding Bishop Michael Curry was the chief consecrator, along with six other bishops from across the church, as well as Jim Hazelwood, bishop of the New England Synod of the Evangelical Lutheran Church in America.

In all, 27 Episcopal bishops, and more than 100 clergy from Maine, participated in the two-hour service. Bishops from eight of the denomination’s nine geographical provinces were on hand to celebrate the new ministry. Each of the six diocesan bishops from Province I, which includes Maine, were in attendance.

The first woman ordained a bishop, and who is also an African American, retired Diocese of Massachusetts Bishop Suffragan Barbara C. Harris, was on hand to witness another first. Brown is the first openly gay, married man to be elected to the office of bishop in Maine. Retired Diocese of New Hampshire Bishop Gene Robinson, The Episcopal Church’s first openly gay bishop, participated as well. The new bishop says he “stands on the shoulders of many other LGBTQ priests,” and stated, “what the church in Maine is doing today is also every bit about them.”

Brown is the chair of the Church Pension Fund Board of Trustees, which provides retirement, health, life insurance and related benefits for Episcopal Church clergy and lay employees. Bishops in The Episcopal Church often serve the wider church in many different ways. Brown said that he is excited to continue the tradition of service and leadership that both of his immediate predecessors offered the church. In fact, he commented, it is those leadership opportunities that “remind me that it’s all about serving others.”

The family of Brown and his husband, Tom Mousin, arrived in Maine from all over the country to witness the joyful occasion. The couple’s 15 year-old nephew, Andachew Mousin, served as an acolyte in the service. Seminary classmates, mentors, former parishioners from Massachusetts and Vermont joined hundreds of people from Maine congregations at St. Luke’s Cathedral to witness their son, brother, uncle, friend and priest as the laying on of hands by the bishops continued the tradition of apostolic succession.

The guest preacher was the Rev. Dr. Barbara K. Lundblad, the Joe R. Engle Professor Emeritus of Preaching at Union Theological Seminary in New York City and a friend of the bishop’s family. She is an ordained pastor of the Evangelical Lutheran Church in America.

Lundblad spoke of the many small congregations in Maine and how the Holy Spirit is not geographically limited. She mentioned how some parishes may be one of the primary social service agencies in a town or village.

Lundblad also said some people feel “it’s not safe to advocate for poor people if it means raising taxes. Not safe to challenge the racism that shapes our nation and some of our churches. Not safe to stand with those seeking asylum at our southern borders. Not safe to care for creation more than we care for profits.” Lundblad challenged the witnesses to this new ministry in Maine to “follow the Spirit to the State House as well as into the sanctuary.”

The new bishop is both humbled and excited to be asked to serve a Maine-wide denomination that has proudly proclaimed the good news of Christ since 1820. Looking forward, as the church plans to celebrate 200 years of service next year, there will be the opportunity to honor the past, but more importantly, to plan for the future. A future that this church of ours is “open to all.”

Brown, originally from the Upper Peninsula of Michigan, relishes the idea of serving in Maine, including the many parts that might feel a lot like home. Before his election, Brown trained at parishes in Menlo Park, California; Traverse City, Michigan; and San Francisco, California. Brown reflected, “These chapters of my life – from college until ordination – stand out for their significance in my growing relationship with Jesus Christ, a joyous journey that continues day-by-day.” The priests from both California churches, and his sponsoring priest from Michigan, were in attendance at the service, along with scores of other cherished friends and mentors.

In 2000, Brown was called to be the rector of St. Michael’s Episcopal Church in Brattleboro, Vermont, and most recently, the parish of the Epiphany in Winchester, Massachusetts.

The service was live streamed and parishes all across Maine, Massachusetts and Vermont hosted watch parties to celebrate with their priest and friend.

Brown traveled to Waterville on June 23 to celebrate the Eucharist with the people of St. Mark’s. Maine’s eighth bishop, the Rt. Rev. Chilton Knudsen, was the guest preacher at St. Luke’s Cathedral while Curry preached at an ecumenical service at the Temple in Ocean Park.

The Episcopal Diocese of Maine is made up of more than 10,000 people in 59 churches and ministries across Maine.