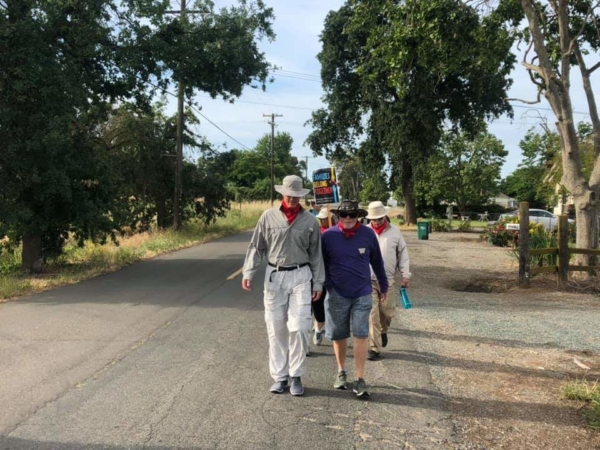 [Episcopal News Service] San Joaquin Episcopalians’ 17-day, 220-mile “Pilgrimage of Hope” started in Fresno and ended May 20 in Sacramento, where they joined nearly a thousand other activists for California’s 23rd annual “Immigrant Day of Action.”

Chanting “Vivan los imigrantes,” the activists met with lawmakers, advocating for extending health coverage to adults who are in the country illegally, and against adding a citizenship question to the 2020 U.S. Census. About 1.8 million of California’s 3 million uninsured people are immigrants in the country illegally, according to legislative staffers. Of those, about 1.26 million have incomes low enough to qualify them for the state’s Medicaid program.

San Joaquin Bishop David Rice, who addressed the gathering and met with state lawmakers, said, “They saw us. They heard us. It crystallizes that we’re here. And they know we’ll be back. There are too many voices and too many needs that are yet to be enunciated in San Joaquin for us not to respond in some significant way in an ongoing fashion.”

From pausing for prayers in fields with farmworkers to stopping for selfies and impromptu livestreamed interviews, the pilgrims experienced extraordinary generosity and radical hospitality, Rice said. The group also helped to raise awareness and even developed a social media following at #gopilgrimsgo and #thepilgrimageofhope.

“Everywhere we went, the impetus was to raise awareness regarding the status and plight of immigrants and our refugee sisters and brothers,” Rice told Episcopal News Service recently.

“Every night, we held awareness-raising events, a kind of Immigration 101 about the pilgrimage and why we were doing it,” engaging people who hosted the group in local Episcopal, Lutheran, United Methodist and Roman Catholic churches, Rice said. Afterward, pilgrims were overnight guests at church members’ homes. The stories of those they encountered along the road, from “someone saying they’ve been in the immigration process for 25 years, to a grandmother pushing her grandchild in a stroller with us for 10 miles” became the stories they shared nightly, he said.

A holy ruckus: ‘We walk because they walk’

The Rev. Nancy Key, a co-chair of the pilgrimage planning committee, joined the May 4 “grand send-off” at St. James Cathedral in Fresno and was in Sacramento to welcome the pilgrims when they arrived.

“Their mantra became ‘we walk because they walk,’ yet our walk is so much different,” Key told ENS. “Even though we’re trying to raise a holy ruckus, to educate, to create awareness, to make an impact” the pilgrimage was nothing compared to the hardships of those who are walking to the border in hope of a better life for their families.

Rain and shine, the pilgrims’ weekdays began with morning prayer and an 8 a.m. start, in scorching 90-degree heat and sudden torrential downpours, through cities and farmland, stopping every five miles to pray, according to Wilson Colon, who drove a support vehicle. “I tended to a lot of blistered feet and tight tendons,” said Colon, a parishioner at St. Paul’s Church in Modesto.

Lee Halkias, 75, a member of St. Raphael’s Church in Oakhurst, couldn’t join the walkers but wanted to help, “so I loaded my motor home with food and supplies and joined them,” he explained.

“My dad was born in 1894 in Greece,” Halkias told ENS. “He came over here at 15 years old. It was a different system; easier to become a citizen. You didn’t have all the obstacles.”

On Sundays, the group worshipped in host churches. Some walkers joined the core group of about a dozen pilgrims at various points along the way.

Like Erin Rausch, 39, a former Stockton resident who recently moved to Boise, Idaho, and joined the pilgrimage in Modesto, about halfway to Sacramento.

Rausch, a Boise State University coordinator for student service projects, said that she “carried homesickness for my 3 1/2-year-old son Jonathan with me” as a reminder that “so many folks, whether it be in detention centers or elsewhere, are separated from their children.”

And yet, “I had the certainty that after this I’d get to see him,” she added. “That is not true for our brothers and sisters in this situation.”

For some, the changing landscape and temperatures prompted new awareness.

“The first day I walked, it was really, really tough,” Rausch recalled. “It was very hot. We had 16 miles to go. “I was really struck by the experience of walking through a city and seeing how folks who don’t have access to cars really must experience it. Everything is fast cars, fast food, and really, in disregard for folk who may have to experience it a bit more slowly.”

Sometimes, she felt invisible; other times, they were stopped by passersby. “As we walked along Eldorado Road in Stockton, a woman driving in the opposite direction stopped her car, rolled down the window and said, ‘I need to talk to you,’” Rausch recalled.

The driver was a 64-year-old woman who had been taken from her parents as an infant and then returned to her family at about age 4. “Her life story, literally, just bubbled up – how she was separated from her family. And even though this happened a long time ago, she was still afraid and said we couldn’t show her face or say her name. It reminded me of just how broken our immigration system has been for decades, and how much damage it has done to people and families for such a long time,” Rausch said.

A few blocks later, two men in a truck flagged down the group. “They asked us about what we’re doing and we tell them and they get so excited,” Rausch recalled. “One of them turns on his phone and starts livestreaming the entire conversation. He was on his way to work, and everything we said, he’d turn the phone to himself and translate into Spanish” for friends and family.

She added, “There is a piece of this that is really about race and socioeconomic status. There are things that, because I’m white I can do, and it’s important that I stand up for what is right and what needs to be done and how things need to change so we can have a humane immigration system.”

San Joaquin Canon to the Ordinary the Rev. Anna Carmichael said the pilgrimage “became our own walk to Emmaus,” as the group prayed, laughed, sang and danced their way to Sacramento. “We began to recognize Jesus in the people we broke bread with every day,” she said.

It also was filled with unexpected surprises.

“We didn’t expect that in Livingston, at Our Redeemer Lutheran Church, two of our dinner companions would tell us their stories of crossing the border as children,” she wrote in a blog post on the diocesan website. “Now, in their 40s, they have yet to return to Mexico. They left brothers and parents and other family behind. With tears in her eyes, Flor shared that her brothers think she has forgotten them because it’s been over 30 years since she’s seen them.”

“They walked with us the next day,” Carmichael told ENS. “It was not something we could have planned for.”

“It seems like a small thing, but in the late afternoon just a period of rest is amazing. They fed us dinner, allowed us to tell our stories, and then members of their churches would take us into their homes. It was amazing.

“There were folks who put us up who do not agree with what we are doing,” she added. “Yet, they were willing to provide the hospitality and really open their homes to someone who needed a place to stay. That was really amazing to me in a country that is so divided right now.”

Carmichael said that hearing those difficult questions, “made me more compassionate and empathetic.”

“Instead of shutting down, I was able to listen deeper and have those hard conversations with people, and not be defensive,” she said. “But to say, ‘Look we don’t have all the answers, but we do have a responsibility to our brothers and sisters, if we claim we see Christ in everybody.

“But that … doing this pilgrimage meant we put into action what we say we believe. I feel almost more convicted in my faith because of it.”