St. David’s Episcopal Church in the Diocese of Pittsburgh is a growing parish with almost 300 members who have no previous Episcopal ties. It rebuilt after a theological split in the diocese left it with only 20 members. Photo courtesy of St. David’s

[Episcopal News Service] When the Rev. Kris Opat returned to St. David’s Episcopal Church in suburban Pittsburgh in 2012, only 20 people were there to start over as a congregation with him. The sanctuary, which seats 300, made the group look even smaller. The building’s previous occupants, part of the Anglican Church in North America, had just decamped.

Ordained for only three years, Opat had never been a priest-in-charge.

Today, St. David’s is a growing parish with almost 300 members, mostly busy young families in a growing suburb who have no previous Episcopal ties. They hear the message of Christ’s unconditional love preached every week from Opat, 38, a trained engineer with dreadlocks who grew up in this congregation.

Opat’s entire career as a priest has unfolded amid the rancor and litigation in the Diocese of Pittsburgh, and weathering that conflict has influenced his welcoming, no-nonsense approach to ministry.

“The split in 2008 was terrible, but since then some wonderful things have happened,” said the Rev. Lou Hays, a retired priest who served in the diocese and mentored Opat. “St. David’s is the top of the list.” 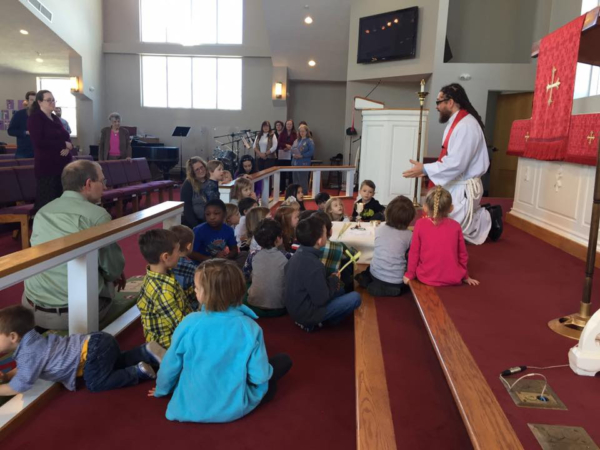 One Sunday a month, the Rev. Kris Opat (right) invites children to say the Eucharist with him. Young families have fueled the growth of St. David’s Episcopal Church in the south hills of Pittsburgh. Photo courtesy of St. David’s

About six months into the revival of St. David’s, Opat got a phone call from a curious neighbor: “Did something change at that church?” The question was posed so often that St. David’s posted a brief history on its website, acknowledging the off-putting nature of the confusing changes the church had gone through since October 2008 when diocesan convention agreed to follow then-Bishop Robert Duncan in his attempt to take the diocese out of The Episcopal Church but retain all the assets that were held by the diocese.

As the wrangling continued, the sign out front of St. David’s went from saying “Episcopal” to “Anglican,” and even the name of the church had changed at one point from St. David’s to Church of the Redeemer as about 90 percent of the congregation tried to dissolve St. David’s and form a new parish in what became the Anglican Church in North America, or ACNA. On May 27, 2012, Pentecost Sunday, Episcopal worship returned to St. David’s and the parish resumed the use of its legal name, St. David’s Episcopal Church.

Opat was very familiar with how the neighbors thought. His parents still live in his childhood home, seven minutes away. His mother was one of the faithful remnants of St. David’s, along with a half-dozen other relatives.

As a middle schooler, Opat had felt at home at St. David’s, “which was evangelical then, almost Pentecostal,” he said. “Our youth group would play games and go to the pizza shop. In that evangelical model, I gave my life to the Lord then, which I have a broader view of now.”

Opat needed a broad view as a priest facing a broken congregation of St. David’s size that also had a burdensome mortgage.

A turnaround starts with the faithful remnant

“I felt hopeless,” recalled Jen Yoon, perhaps the most invested remaining member at St. David’s. She directed its preschool (St. David’s Christian Early Learning Center) and its children’s ministries. “We had so few people, and it was going to take so much.”

She was apprehensive about Opat and the direction he was heading theologically.

“I had heard a lot of stories about Episcopalians from the Anglican [ACNA] church – one side of the story – and I was praying about my commitment to a church family where people had acted terribly and decided they couldn’t be together,” Yoon said. “What came to me through nights of painful prayer was to let go of any and all labels or thoughts of Anglicans versus Episcopalians and get back to what this is really about: telling people about the love of Christ.

“I spoke with Kris because I wanted to know: Does he believe in one God and Father, salvation in Jesus Christ and the continued work of the Holy Spirit? We had a frank conversation around those three questions, and our beliefs very much aligned with each other. Kris was clear that we would become a place of community.”

Others stayed at St. David’s despite or because of family concerns.

Sam White had been baptized, raised and confirmed at St. David’s. He worshipped in the ACNA congregation and decided “to see if The Episcopal Church seemed a little more aligned with the attitudes I remembered learning at church during my youth.” That choice put him at odds with his parents, with whom he was living at the time; they left with the ACNA parish. White is now senior warden of St. David’s.

Logistics made member Jamie Sticha decide to stay. “I did consider leaving, and it was a difficult time,” she said. “With four young kids, I felt it would be more difficult to make it to church because we’d have to be ready a half hour earlier.”

To fan the small ember that was his parish, Opat worked alongside Hays the first 18 months before being appointed priest-in-charge. With no altar guild and no readers, Opat did whatever was needed Sunday mornings, even playing guitar with the band.

“They were traumatized, shell-shocked, so we didn’t ask the laypeople to do more. They needed to engage in healing,” Hays said. “Kris was extremely active in recruiting a vestry and focusing on Sunday morning. But number one, he loved the people. He was demonstrating to them through faithfulness to the Scripture, and just that sense of warmth and connecting that he has, that they could be comfortable with us. He was what we call the non-anxious presence that reassures people that it’s going to be okay.”

By end of first year, about 75 people were coming to the big church that everyone passes on a main thoroughfare. Some families attend after first experiencing the community through the preschool. About a dozen returned from the ACNA congregation. “We are open about anyone coming back,” Opat said. 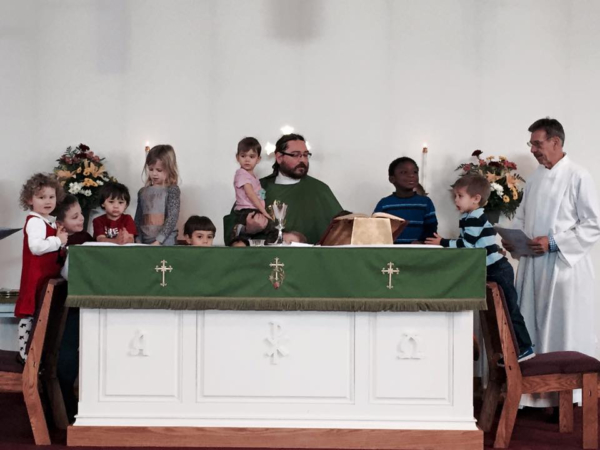 Welcoming children to participate in St. David’s services has helped spark the congregation’s rebirth after all but 20 members decamped. The Rev. Kris Opat (center) attended St. David’s as a teenager. Photo courtesy of St. David’s

St. David’s discovered what it could – and could not – be about. These lessons brought the parish out of the ashes and bucked the trend of Episcopal churches losing visitors and members. Here are some of those positive steps taken by the congregation:

Engineering a path to ministry

Opat’s resilience was strengthened at Grove City College, where education “is also about learning how to serve others while pursuing your own life’s work,” as the school’s website states. Those paths didn’t converge right away when Opat studied engineering there. He wanted to switch to philosophy, but that idea didn’t fly with his mother. His ministry took root when a summer leadership internship involved planting a successful house church.

From there, Opat became involved with Three Nails, then a part of the emergent church movement in Pittsburgh and accountable to the Diocese of Pittsburgh. In 2005, it was described as a fellowship of believers that cut across denominational lines and incorporated Roman Catholic, Anglican, Orthodox and Jewish liturgies in its services. The group had no regular meeting place, gathering instead in homes, coffee shops, bars and old church buildings.

That experience led him to seminary, at what was then called Trinity Episcopal School for Ministry, and the frontline of a theological battleground over the ordination of the Rev. Gene Robinson, the first priest in an openly gay relationship to be consecrated a bishop in a major Christian denomination. Robinson’s consecration fueled the Pittsburgh split.

“In my ordination class of 12, I was the only one who stayed in The Episcopal Church,” Opat recalled. Today, the seminary has dropped “Episcopal” from its name and uses the tagline “an evangelical seminary in the Anglican tradition.”

“It was about taking a side more than it was theology,” Opat said. “If there is any Christian tradition that splits over anything but the creeds, that splitting makes so little sense in the Episcopal tradition, which is about space and room to disagree. I wanted to be part of what was diverse, open to nuance and the Holy Spirit doing things in our midst and the tradition of scripture and faith – but not in a dogmatic and unquestioned way.”

At St. David’s, Opat routinely states that he doesn’t have all the answers. His interpretation of the Bible, while informed by his professional studies of the text, may not be the only one, he says. He constantly invites the parishioners to discussions outside the service.

When the theological argument over same-sex relationships cropped up at St. David’s, Opat’s response was based in compassion.

“We had a preteen program for kids in our parish and others who don’t go here, and a conservative mom had words with Kris about homosexual marriage,” Yoon said. “Calmly and respectfully, he didn’t back down. He agonized for days about that because he knows that people hurt in a lot of different ways, and he doesn’t like to have anyone walk away, to not come to solution.”

A decade after the split, moving forward

Today, St. David’s is the seventh largest of the 36 participating congregations in the Episcopal Diocese of Pittsburgh. Almost all of the legal disputes with the breakaway Anglican congregations have been settled. “While acknowledging our deep differences, both sides have been concerned with seeking the highest degree of relationship possible, in the hope of reducing the scandal to the Gospel posed by the split,” said Pittsburgh Bishop Dorsey McConnell in early 2018, as the diocese reached an ongoing agreement with nine ACNA congregations concerning their use of church properties.

(On Dec. 4, a judge approved the agreement, clearing the final legal requirement for it to go into effect. Under the agreement, the diocese and the ACNA parishes commit to treat each other’s missions with respect. The parishes will continue to maintain, insure and pay for the operations of property held by the diocese before the division, and pay an annual fee to the diocese. If a dispute arises, the diocese and parishes agree “to resolve the dispute promptly as fellow Christians through direct exchange of information and discourse.”)

St. David’s story, as told on its website, says, “Since the split, St. David’s has experienced a wonderful renaissance. The conflict and uncertainty are over and a stable, warm, and inviting spirit has taken root. In this welcoming environment we are growing and flourishing.”

For Opat, his calling isn’t denominational.

“I’m not super-interested in making them [people at St. David’s] Episcopal,” he said. “I want them to understand what it means to be a follower of Jesus. When I stand in the pulpit, I say, ‘Yeah, this is what we believe, and I have not been sure what to make of it either. But I’ve not found a story more satisfying and real in its experience than this one, with its room for questioning and uncertainty and whatever you bring to it.’”