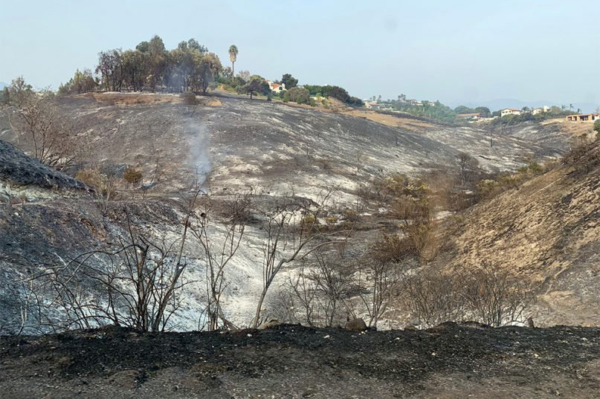 [Religion News Service] Two hours before the sun set over the Pacific Ocean on Nov. 8, the Rev. Joyce Stickney, rector of St. Aidan’s Episcopal Church in Malibu, received word about wildfires that had broken out 30 miles away in the hills above the Simi Valley.

Hot, dry Santa Ana winds were howling that day, which meant that a fire that began an hour away could pose a legitimate threat to seaside Malibu, where wildfires are a perennial concern — the 1993 Old Topanga blaze raged for 10 days, destroying more than 350 homes and leaving three people dead.

So Stickney headed for St. Aidan’s sanctuary where, from its hillside perch a few hundred yards above the Pacific Coast Highway, with the Santa Monica Mountains in the distance to the east, she prayed for her city of about 13,000 souls.

Parish administrator Nathaniel Sherrill, whose home in Newbury Park, California, was close enough to the fire’s origin that it already had been evacuated, joined her to recite an evening meditation from the Book of Common Prayer: “Almighty God, we give you thanks for surrounding us, as daylight fades, with the brightness of the vesper light….”

“That is the one thing that religion definitely does give us, whether you’re spiritual or religious or not — we’ve got prayers for times like these,” Stickney told Religion News Service late last week. “They’re words that are timeless and walk us through the motions: ‘Thank you, God, for the vesper light. The world is still turning and soon it’ll be nighttime; give us peace’ — the ancient wisdom of our tradition, our prayers.”

By daybreak, Stickney opened the front door of St. Aidan’s rectory, where she lives with her husband and their seven children, to see thick plumes of smoke moving in their direction. Overnight the Woolsey Fire had jumped 101 Freeway and barreled west, bearing down on Malibu as it raced toward the ocean.

Stickney, who has been rector of St. Aidan’s for 13 years, rousted children from bed and began packing in a hurry, knowing that a mandatory evacuation of Malibu would mean the main route into and out of town — the famed coast highway — would become gridlocked quickly, trapping motorists, potentially in the path of the fast-moving inferno, for hours.

She grabbed the church registers and a chalice from the altar before setting out with her family for a wholly uncertain future.

They took two cars — Stickney driving one, her 17-year-old daughter Grace driving the other — and headed north toward Oxnard, where the children’s babysitter lives, while thousands of their neighbors fled south toward Santa Monica. Stickney and five of their children (two are away at college) arrived at the babysitter’s mobile home where later that night they were joined by her husband, Paul, who had left for work on a TV show set at 4:30 a.m., before the smoke and chaos had descended.

On Nov. 19, 10 days after the wildfires erupted, the Woolsey Fire had burned nearly 97,000 acres, destroying 1,500 structures — many of them in Malibu — injuring three firefighters and killing three civilians. Reportedly, none of the city’s dozen or so houses of worship was lost in the fire, but three large Jewish camps were destroyed, and Rabbi Michael Schwartz of the Malibu Jewish Center & Synagogue lost his home.

Wildfires are creating disaster areas across the state, with the Camp Fire in Northern California proving particularly deadly and destructive. Authorities report 79 fatalities and more than 12,00o homes destroyed in and around Paradise and Chico, as of Nov. 20, and the fire in that region has consumed more than 150,000 acres. Episcopalians there say they are gathering strength and resilience through community connections and an outpouring of love and concern from across the Episcopal Church.

In Malibu, waiting for news was a test of Stickney’s faith and mettle, but when she it came, it was a relief. St. Aidan’s survived the fire unscathed — miraculously so, Stickney said, as flames stopped at the edge of the new driveway that had been completed just days before the wildfires.

As part of a multi-year parish renovation, the driveway was replaced for the express purpose of making it easier for fire trucks to reach the church, which also houses a preschool attended by her two youngest children — twin 2½-year-old boys.

“The fire had come right up to the edge of the driveway, all along the side, and for whatever reason — whether it was the fire marshals, the wind, St. Aidan, God, all of the above — whatever it was, the fire did not cross over,” Stickney said.

The same isn’t true for the church’s parishioners. At least 11 of the 50 or so active families at St. Aidan’s lost their homes in the fires.

About half of the parishioners who lost their homes in the fire are elderly, and Stickney is concerned about their ability to rebuild in Malibu, where strict building codes and other local ordinances make construction a difficult, often maddeningly slow process under the best of circumstances.

“This is catastrophic for those people, and they’re not wealthy people,” said the Rev. Ed Milkovich, St. Aidan’s associate priest, who has lived in Malibu for 20 years. “It may have a catastrophic effect on the church, too, because I think there’s a number of these people that may not be able to rebuild. If they don’t have a mortgage, they’ll take the insurance money and go someplace where they can afford it.”

For most people, the word “Malibu” conjures images of a lavish enclave where mega-mansions line pristine beaches and kids ride to school in Bentleys. But according to the 2010 U.S. Census, Malibu had a median household income of $133,869, with about 10 percent of the population living below the federal poverty line.

Although you’re more likely to run into a celebrity at the Ralph’s here than at most other grocery stores in America, Malibu is home to many more regular folks than not.

St. Aidan’s congregation is emblematic of that diversity. While there are members who work in the entertainment industry — Milkovich was a TV and film producer for decades before he felt a call to the ministry and became ordained last year at age 63 — the parish is also home to several professors from Pepperdine University and retirees who worked for Hughes Aircraft and other local companies.

Founded in 1956 as a mission church of St. Augustine’s in neighboring Santa Monica, St. Aidan’s initially met in local bars and restaurants until it could break ground on the hillside property overlooking the Pacific and Paradise Cove.

The Malibu parish is the namesake of St. Aidan of Lindisfarne, a 7th-century Irishman who became a monk on the Scottish Island of Iona before being dispatched to England, where he served as a bishop in Northumbria. The parish chose the name because of the saint’s association with the sea and the island monasteries of Iona and Lindisfarne.

But Aidan is also the patron saint of fire protection.

During the devastating 1993 wildfires, St. Aidan’s became the central gathering point for relief efforts for thousands of residents who were left homeless and displaced.

Debbie Cornett’s parents were founding members of St. Aidan’s. In 1993, the family home in Malibu burned to the ground.

“Mom and Dad were determined to rebuild because they loved Malibu, and we did — we built new memories and we had St. Aidan’s,” said Cornett, who gathered alongside St. Aidan’s priests and a handful of other parish members for a vespers service and meal late last week at the Episcopal Church of the Epiphany in Oak Park, about an hour’s drive from Malibu, but close to where Stickney and several parishioners were staying while evacuated.

They prayed and read Scripture aloud before tucking into a meal of chicken and rice provided by a local Muslim group with whom the parish has struck up a friendship in recent years. The hall at Epiphany smelled of smoke six days after wildfires swept through, singeing the landscaping but sparing parish buildings and its nearby vineyard.

There were hugs, tears and the kind of laughter borne of friendship that comes easily even in the hardest of times, as they compared notes on the well-being of neighbors and friends. One parishioner had spent her time in exile creating an elaborately detailed lot-by-lot map on her computer showing which homes had been destroyed and which were still standing.

“I should have lost my house three times,” said Milkovich, who credited a neighbor with a garden hose who had stubbornly stayed behind despite the mandatory evacuation for saving his home. “This is my neighbor’s house on fire, and that’s my other neighbor’s house on fire … and this is my yard on fire,” he said, scrolling through photos on his smartphone.

The Woolsey fire has been more than 90 percent contained and evacuation orders had been lifted for most of Malibu by Monday, but not in time for their Nov. 18 Sunday service. Instead Stickney and about 10 other St. Aidan’s parishioners joined their mother church, St. Augustine in Santa Monica, for worship. Stickney expects her parish to be back to a regular service schedule in Malibu beginning Nov. 25.

In the wake of the fires, Stickney largely is shepherding the St. Aidan’s diaspora electronically, by phone, text and email, as displaced members have fanned out along the West Coast seeking shelter.

Seated in a booth in the back of a Panera Bread 50 miles from St. Aidan’s and her home by the sea, a weary yet determined Stickney, enlivened by the faith of her own flock, read aloud a short note from a new parishioner whose family had recently relocated to Malibu from Texas, only to have the family’s new home burn to the ground.

“‘I keep reminding my family of Isaiah 61:3 — ‘beauty from ashes.’ We will all together create a more beautiful Malibu and community spirit. God’s blessing on each of you as you move forward one day at a time.'”