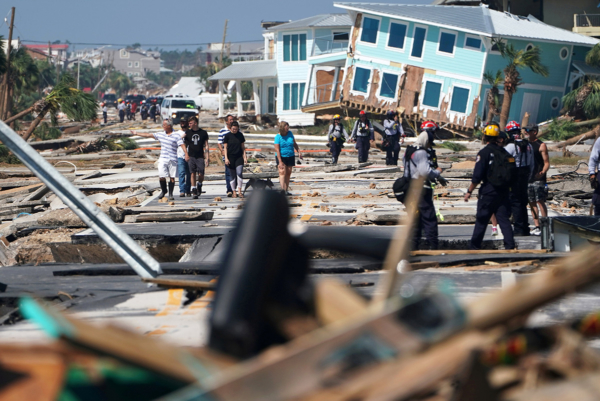 First responders and residents walk along a main street in Mexico Beach, Florida, on Oct. 11, 2018, one day after Hurricane Michael made landfall. Photo: Carlo Allegri/REUTERS

[Episcopal News Service] Episcopal churches on the Gulf Coast, including parts of Florida, Georgia and North and South Carolina, continue to assess Hurricane Michael’s damage, with some in the hardest hit coastal areas still in the rescue phase.

“We’re at a time when every tree is down and every roof is compromised,” said Dwight Babcock, diocesan administrator for the Episcopal Church of the Central Gulf Coast, in an Oct. 15 interview with Episcopal News Service. “This [recovery] is a marathon, not a sprint. We just don’t know what we’re looking at.”

On Oct. 12, Babcock and Central Gulf Coast Bishop Russell Kendrick traveled east in Florida from Pensacola to Panama City and to other affected areas to visit some of the 11 affected churches. The bishop made a second trip the following day with a small group to distribute generators and other emergency supplies, said Babcock.

Ten of the 11 damaged churches held services “in one form or another,” on Oct. 14; some were held inside the church buildings, while some were outdoors in pavilions, he said.

On Oct. 10, Hurricane Michael made landfall near Panama City, Florida, as one of the strongest hurricanes ever to hit the mainland United States, killing 19 people. A Category 4 hurricane packing 155 mph winds, Michael wiped out trees and flattened buildings. Five days later thousands of people remained without electricity.

“From Highway 79 to the eastern edge of our diocese, the road conditions are still not safe for anyone to travel,” said Kendrick in a video posted on the diocese’s website. “Please be patient. Let’s let the trained responders do their jobs and make the conditions safe so we can get in there and help as necessary.”

The Episcopal Church of the Central Gulf Coast has created a Hurricane Relief Hub, listing ways to donate to hurricane relief efforts. The diocese also offers emergency preparedness and response resources. The diocese includes the Florida Panhandle and parts of southern Alabama.

Communities inland, in Georgia and further into the Southeast, also were affected by Hurricane Michael; some of those communities continue to recover from Hurricane Florence, which made landfall as a Category 1 storm on Sept. 14 near Wrightsville Beach, North Carolina. The Diocese of East Carolina, which covers North Carolina’s coast, also has issued an appeal for support.

The Episcopal Diocese of Georgia reports significant damage in Albany, Bainbridge, Americus and the surrounding counties. Tree damage was significant in Albany, affecting the infrastructure and leaving many without power or potable water. In Bainbridge and in Decatur County, roofs were blown off and trees took out power lines, blocked streets, and crashed into houses, according to Episcopal Relief & Development.

“The local dioceses are continuing to assess the damage caused by the storm,” said Katie Mears, senior director of Episcopal Relief & Development’s U.S. Disaster Program, in a statement posted on its website. “Disasters have three phases: rescue, relief and recovery. We are prepared to support them as we move into the next phase of providing relief to affected communities.”