[Episcopal News Service] The Rt. Rev. David E. Richards, a longtime Episcopal bishop who died last month, is being remembered fondly by those who served with him across the church, from Central America to the Diocese of Albany to the College of Bishops, which now bears his name. 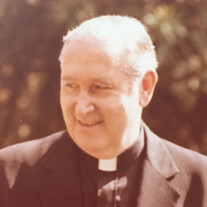 Born in Scranton, Pennsylvania, in 1921, Richards graduated from General Theological Seminary in 1945 and was ordained a priest in Panama. He was consecrated Albany’s suffragan bishop in 1951, and six years later he was elected bishop of Central America, where he provided leadership on a range of matters, including indigenous ministries.

A history of the church in Central America notes that Richards was the first bishop of the Missionary District of the Episcopal Church in Central America, which was created in 1957 when the Church of England transferred jurisdiction of chaplaincies in Guatemala, Honduras and Salvador to the Episcopal Church. Guatemala, Honduras, Nicaragua and Costa Rica made up the new missionary district; Richards lived in Costa Rica.

From 1968 until his retirement in 1988, Richards served as national coordinator of the House of Bishops’ Office of Pastoral Development and based his operations in Florida. The “bishop to bishop” mentoring program he created in the 1970s led to the formation of the College for Bishops in 1993 at General Theological Seminary, according to an online history.

Richards also was remembered for his work training Anglican bishops throughout Africa, the Rev. Michael Sahdev, assistant rector at St. Phillip’s, said in a tribute Aug. 24 on Facebook.

“Personally, it was a blessing to know Bishop Richards in my first year as a priest,” Sahdev said. “As his health declined things got harder, but he always offered prayers for me & the world. This past Thursday we made our confession and absolved one another. His gift of mentoring priests never left.”

Richards is survived by his wife, Helen Richards. In 2013, the College for Bishops was renamed The Rt. Rev. David E. & Helen R. Richards College for Bishops, “in recognition of the fact the Richards’ ministry was a team operation,” said Bishop Clay Matthews, the Office of Pastoral Development director at the time.

At the time of his death, Richards was senior bishop of the Episcopal Church by order of consecration, according to the Diocese of Southeast Florida.

“May Bishop David rest in peace and rise in glory,” the diocese said in announcing his death.