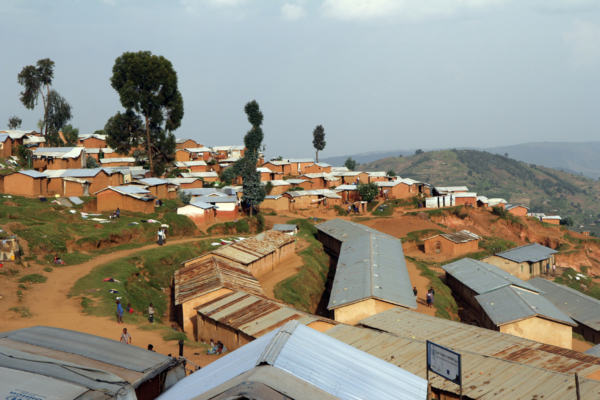 In early March 2015, the Episcopal Church led a pilgrimage to Africa’s Great Lakes region and visited the Gihembe Refugee Camp in Rwanda to learn about the plight of Congolese refugees and the United States Refugee Admissions Program. Photo: Lynette Wilson/Episcopal News Service

[Episcopal News Service] The United States was a worldwide leader in refugee resettlement just two years ago, when more than 80,000 refugees were welcomed into the country with help from the nine agencies with federal contracts to do that work, including Episcopal Migration Ministries. That number has dwindled under the Trump administration, which announced Sept. 17 it would reduce resettlement further, to just 30,000 a year.

The Episcopal Church has a long history of standing with refugees, people who are fleeing violence, war and political and religious persecution, and on Sept. 18 the church expressed its disappointment at the reduced cap on the number of refugees.

“As followers of Jesus Christ, we are saddened by this decision,” Presiding Bishop Michael B. Curry said in a written statement. “Our hearts and our prayers are with those thousands of refugees who, due to this decision, will not be able to find new life in the United States. This decision by the government does not reflect the care and compassion of Americans who welcome refugees in their communities every day. Our faith calls us to love God and love our neighbor, so we stand ready to help all those we can in any way we can.”

The current ceiling for refugee resettlement is 45,000 for the fiscal year ending Sept. 30, but so far, fewer than half that number, just 20,918, have been admitted. The U.S. Department of State announced Sept. 17 that the United States would reduce the ceiling to 30,000 for the fiscal year beginning Oct. 1, the lowest level since the resettlement program was created in the 1980s.

“It’s a disheartening week in the life of our country. The administration’s announcement that we will only be receiving up to 30,000, down from 85,000 just two years ago, refugees is particularly sad given that refugees are indeed the most highly vetted group of people in our country and, therefore, pose little threat to our security and our way of life,” said the Rev. Charles Robertson, canon to the presiding bishop for ministry beyond the Episcopal Church, who oversees Episcopal Migration Ministries.

Today, there are 25.4 million refugees worldwide, according to the United Nations High Commissioner for Refugees, whose mandate is to provide international protection for refugees.

UNHCR’s primary focus is on repatriation, or safe return home. When that is not possible, the agency helps refugees pursue citizenship or legal residency in the host country. The third option is resettlement to one of the more than 40 countries worldwide that accept refugees. Globally, less than 1 percent of refugees receive resettlement. Historically, the United States had led the world in welcoming refugees.

The United States formalized its refugee-resettlement program with the Refugee Act of 1980 in response to the increased numbers of refugees fleeing communism in Southeast Asia. Until then, churches sponsored refugees’ visas; but by the mid-1970s, that process was insufficient to meet the need.

EMM has resettled more than 90,000 refugees over the last 30 years. Previously, EMM had operated 31 resettlement affiliates in 26 dioceses, providing direct assistance to recent arrivals. More recently, the number has decreased to 14 affiliates in 12 dioceses, though EMM still plans to resettle 1,527 individuals in the current fiscal year.

The U.S. resettlement program’s goal is to help refugees establish new lives and become self-sufficient. Toward that goal, EMM partners with affiliates, churches, and government and nongovernmental organizations to provide services to refugee families upon their arrival in the United States. Such vital services include English language and cultural orientation classes, employment services, school enrollment, and initial assistance with housing and transportation.

EMM is one of nine agencies partnered with the U.S. State Department to welcome and resettle refugees. Six of the government’s resettlement partners are faith-based; the program has historically, for the most part, enjoyed bipartisan support.

The U.S. Constitution guarantees religious freedom, and refugee resettlement allows those who would come to the U.S. to live in safety and to practice their religion without persecution, said Rebecca Linder Blachly, director of the Episcopal Church’s Washington, D.C.-based Office of Government Relations.

“As a church, we have a particular interest in ensuring the freedom of religion for all people worldwide. This administration has spoken repeatedly about the importance of religious freedom, but we are seeing them step back from one of the most powerful ways that we can protect those who are persecuted or threatened because of their religious beliefs,” said Blachly. “As a nation, we have historically offered protection to those who are not safe in their countries. This dramatic reduction in the number of refugees – and systematic dismantlement of this successful program – will have grave humanitarian consequences.”

President Donald Trump made curbing immigration a centerpiece of his election campaign, and his White House’s reductions to the nation’s refugee resettlement program show an interest in limiting more than just illegal immigration. The president determines the number of refugees allowed entry into the United States; for months administration officials have pushed to further decrease the number of refugees admitted.

“Slashing the refugee resettlement admissions number to a historic low is tied to this administration’s efforts to clamp down on legal immigration,” said Lacy Broemel, the church’s refugee and immigration policy adviser. “This effort is having grave impacts on families and vulnerable persons. We urge members of Congress to do all they can to maintain or resettlement system, protections for asylum seekers, and compassionate solutions for all immigrants.”

To learn more about the church’s involvement in refugee resettlement or to support EMM, click here.