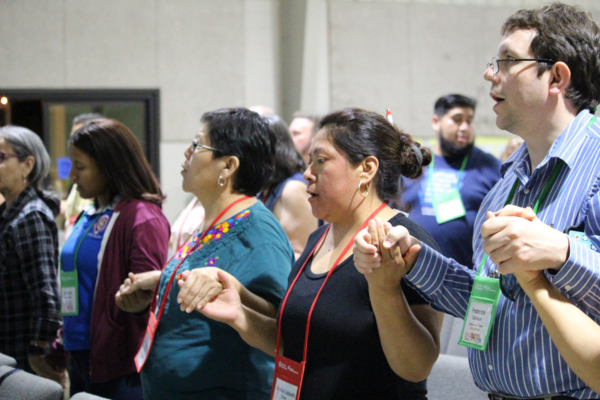 A group of participants joined hands in prayer during one of the worship services at Nuevo Amanecer. Photo: Millard Cook

The theme of this year’s conference was “Construimos, Equipamos, Inspiramos” – “We Build, Equip, Inspire.” Many participants went to great lengths and traveled long distances to attend. This year, for the first time, the conference included a large presence from Province IX, with participants from countries in Central and South America.

The Rev. Bladimir Pedraza was among five participants who made the trip to North Carolina from Colombia. He first learned about Nuevo Amanecer at the Evangelism Matters conference in March in Ohio, and he was thrilled when his bishop invited him to participate in Nuevo Amanecer. Pedraza expressed his gratitude for this opportunity to reflect and share with people from other cultures.

“It has been a wonderful experience,” Pedraza said. “It is a reminder that we are all equal in the church, and that we all have the same love.”

The first Nuevo Amanecer took place in Los Angeles in 2002, and six years passed before it was offered again, in Atlanta. In 2010, the conference found a home at Kanuga, where it is now held every two years. It is organized by the Office of Latino/Hispanic Ministries in partnership with Kanuga, and this year’s conference received additional support from the Episcopal Church Foundation and Forward Movement. 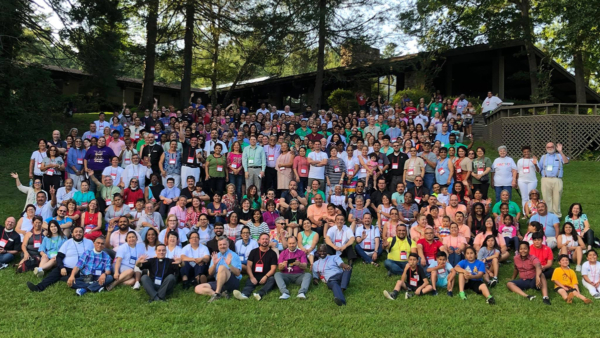 The Rev. Anthony Guillén, missioner for Latino/Hispanic ministries and director of ethnic ministries for the Episcopal Church, said that from the start the focus of Nuevo Amanecer has been formation and fellowship. When he first began his position, many people involved in Latino ministries felt very isolated from each other, and Nuevo Amanecer provided an opportunity for them to learn in community.

He noted that the majority of participants are lay people. “Why are they coming to a ministry conference? They’re coming because they want to learn and be trained. They recognize that they have gifts, and they long to be evangelists and leaders in this church,” Guillén said.

He explained, “Our vision is to create a place where people can come together, whether they are just starting and discerning about Latino ministry, or whether they have been in the pews for several years and they’re hearing God’s call to do more, or whether they are already in leadership and looking for more training.”

This year’s conference included three keynote speakers: the Rt. Rev. Daniel Gutiérrez, bishop of the Diocese of Pennsylvania; the Rt. Rev. Rafael Morales, bishop of the Diocese of Puerto Rico; and the Rev. Stephanie Spellers, the presiding bishop’s canon for evangelism, reconciliation and stewardship of creation. Each speaker addressed one part of the overall theme for the conference.

Gutiérrez reflected on the theme of building up the church. He sought to correct harmful language, explaining, “For Latinos and for every person of color, we are not an outreach project. We are the church.”

In her presentation, Spellers affirmed the gifts already present within the community. “Nobody is trying to give Latinos something you don’t already have,” she said. She recounted the many ways she had been inspired by the Latino community, saying, “You have changed my life and grown my faith.” She called on all participants to let their light shine bright. At the end of her presentation, all joined her in singing “This Little Light of Mine” in both English and Spanish.

In addition to the plenary sessions, participants had the opportunity to attend a variety of workshops, with topics such as the state of immigration in the United States, LGBTQ ministries, Latino music within the Episcopal Church and the use of social media as a tool for evangelism.

Sandy Milien, a recent college graduate from the Diocese of Southeast Florida, was one of the workshop presenters. She helped lead a workshop about the Beloved Community StorySharing Campaign, and she was very moved by the responses of the participants. “It’s great when people come up afterwards and tell you that your workshop touched them in unexpected ways,” she said. “That’s when you see the love of God working in people.”

This was Milien’s first time attending Nuevo Amanecer. Her mother, an Episcopal priest in Miami, has participated in the conference several times and encouraged her to come. “It is such a great way for people of different ministries in the Latinx community to come together and see that we are more than just our small churches,” she said. “We are a big part of the Episcopal Church.”

Agatha Nolen, a participant from the Diocese of Tennessee, said she learned a great deal during Nuevo Amanecer. She mentioned the growing Latino population in her hometown of Nashville, and she said that she has wondered how her congregation can better engage with this community.

“One thing that I’ve learned here is that there’s not a one-size-fits-all model,” she said. She was grateful to learn about ways that non-Spanish speakers can become involved in Latino ministries. “In our diocese, we don’t have a lot of priests who speak Spanish, and that has always been identified as a barrier. Maybe it’s not as much of a barrier as we really thought.” 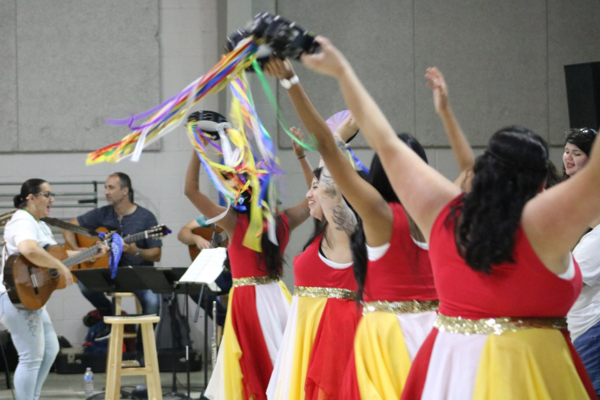 A group from Trinity Episcopal Church in Greeley, Colorado, presented a dance during the opening Eucharist. Yuri Rodriguez of Christ Church Cathedral in Indianapolis directed the team of choir members and instrumentalists who provided music. Photo: Millard Cook

The conference included spirit-filled worship, with music directed by Yuri Rodriguez, associate director of Hispanic music and ministry manager at Christ Church Cathedral in Indianapolis. She worked with the liturgy team to select a broad range of music, from indigenous Latin American music to contemporary music by Latinx composers.

“My vision was to bring together the Anglican choral tradition with our Latin American rhythms and musical language,” she said.

The conference also featured an original composition, “Un Nuevo Amanecer,” written by Ana López and the Rev. Hipólito Fernandez Reina for the occasion.

The worship services, like the conference as a whole, celebrated the diversity of ministries within Latino communities. The Rev. Nancy Frausto, a priest in the Diocese of Los Angeles, preached at the closing Eucharist, and she told participants that God had brought them into the Episcopal Church to share their unique gifts.

“God has called us to the Episcopal Church to share our experiences, our history, our tradition, our language, our music,” she said. “Each one of you has gifts that the church needs now.”

– The Rev. Leigh C. Preston is an instructor in pastoral Spanish and Latino/Hispanic ministry in the School of Theology at Sewanee: The University of the South.