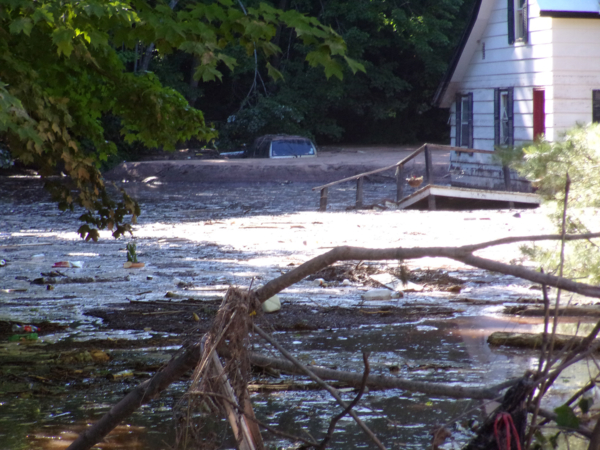 A massive June 16-17 rainfall caused flooding in three Upper Michigan counties. This photo shows the water level at Suzanne Brush’s house, which had to be condemned, just outside Lake Linden. Photo: Courtesy of Lois Siler

[Episcopal News Service] Lois Siler’s phone rang at 4:45 a.m. on June 17; it was her 29-year-old daughter Suzanne Brush calling to tell her she was homeless. She wasn’t homeless exactly, but she, a friend and a dog were trapped in her home’s second level and water continued to rise.

Brush next called emergency responders – volunteers in this rural part of Michigan – and an hour and a half later called her mother to say that she, her friend Katelyn Hough, and Polar, a white husky mix, were safe and at the fire station.

“My daughter’s house is a total loss with the flooding,” said Siler, a Lake Linden, Michigan, resident and member of Trinity Episcopal Church in nearby Houghton, in a telephone interview with Episcopal News Service.

Brush’s was one of eight homes destroyed by the massive flood that ripped through Houghton County; hitting Lake Linden, Hubble and Tamarack City particularly hard. Brush’s homeowners insurance policy didn’t include flood insurance, so even though the property was condemned, she’s still responsible for the mortgage and property taxes. Brush, Hough and Polar have been staying with a friend in Lake Linden, said Siler, while they look for permanent housing.

The rains began on Saturday night, June 16, and continued into Sunday, when more than seven inches fell in a matter of hours on the Keweenaw Peninsula, the northern most part of the state, home to just over 36,000 people, more than 20 percent of whom live in poverty.

“That set off this really strange flooding that happened all over the area,” said Rick Stanitis, campus missioner for Canterbury House at Michigan Technological University in Houghton. “Lake Superior is a huge watershed and you don’t [usually] have to wait long for it to drain.”

But the rains intensity was more than the watershed could readily absorb, made worse by rock and steep hills, and the flood destroyed streets and knocked out culverts, and left 500 basements filled with mud. Close to two months later, some residents still have mud in their basements, he said, in a telephone interview.

“There’s a lot of suffering going on and a lot of poor folk. A lot of people suffering without money who are not going to tell anyone they’re in need and they have a basement full of mud,” said Stanitis.

Three weeks after the first flood, heavy rains caused a second flood in Houghton County. It is Stanitis’ job to keep the diocese informed of the work of the Long-Term Recovery Group Steering Committee, which is working on solutions to bring resources to the emerging needs. Following the June flood, the Diocese of Northern Michigan began collecting donations in support of flood relief and continues to do so.

“The flash flood in Houghton County on Father’s Day has left a path of destruction to infrastructure and homes in Houghton County,” said Northern Michigan Bishop Rayford Ray, in an email to ENS. “Many of you have seen the photos and videos on news and social media sites showing the devastation to public infrastructure, but individuals in the community have also suffered many losses and set backs of all types. The community continues to assess the damage from the disaster, and relief efforts have been underway and continue to this very day.

“It is estimated that costs are over $50 million because of the flooding which does not include the emotional impact to those who were touched by this devastating flood.”

Siler’s yard was damaged, but nothing serious. Brush, though, who lived just outside Lake Linden’s village limit in School Craft Township, near an old railroad bed that has since been filled in to accommodate snowmobiles and off-road vehicles, lost everything. That fill, along with water, ended on Brush’s property and, even though the century-old house still sits on its foundation, it’s beyond repair.

“This was a unique experience. The home she lived in was 100 years old and has managed to make it through serious weather. … This was an extraordinary event,” said Siler. “The house is gone; the cars are gone. All is well with them. There’s been a little game of find Suzanne’s stuff; it’s strewn all over the place.”