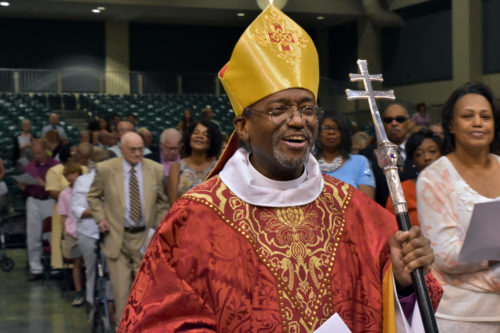 Presiding Bishop Curry in Vicksburg, Mississippi, to honor and commemorate James Chaney and the Martyrs of Philadelphia. Photo: Jeanie Munn

[Episcopal Diocese of Mississippi] Presiding Bishop Michael Curry attended a historic event for the Diocese of Mississippi that was brought into being by four Jackson churches and one Vicksburg church as they organized services to honor and commemorate the legacies of Mississippi civil rights activists Medgar Evers, James Chaney, Andrew Goodman, and Michael Schwerner.

St. Mark’s, St. Christopher’s Church of the Ascension, St. Alexis, and All Saints in Jackson observed their annual racial reconciliation service that focuses on the life of Medgar Evers. The event was held at St. Andrew’s Cathedral in Jackson.

Evers, who was assassinated on June 12, 1963, was Mississippi’s first field secretary of the National Association for the Advancement of Colored People (NAACP). Shortly after Evers’ death, President John F. Kennedy asked Congress to write a comprehensive civil rights bill that was signed into law by President Lyndon Johnson a year later.

In an interview prior to the Saturday service at the cathedral, Curry said that he wanted to thank the people of the Diocese of Mississippi for their continuing commemorations. “The older I get,” said Curry, “the more I am aware that the struggle must continue because our job is mastery over it [racism], not its mastery over us. When you go to sleep and forget about it, then the various forms of racism and bigotry all creep back up on you.”

St. Mary’s, Vicksburg, and the Episcopal churches of Warren County, hosted a service on Sunday, June 12, at the Vicksburg Convention Center commemorating the lives and witness of “James Chaney and the Martyrs of Philadelphia.”

Chaney of Meridian, Mississippi, and Andrew Goodman and Michael Schwerner of New York were found buried in shallow graves 44 days after they were declared missing in June 1964.

The presiding bishop said in the interview that racism takes place all over the world in various forms and shapes. “It is similar to addiction as it’s always with you, but you learn to master it. You never live under that illusion that it’s not somewhere creeping around, and that’s true with racism. The reality is that racism is a part of a form of expression that our theological tradition used to call original sin.” 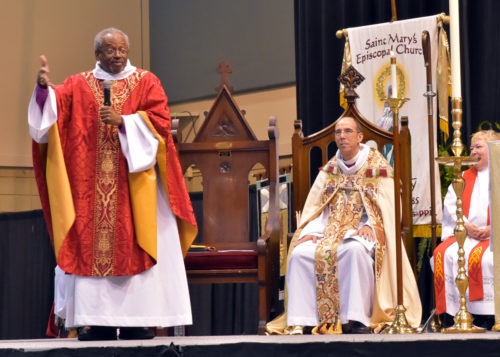 From the pulpit at the cathedral and in Vicksburg, Curry’s charismatic preaching held the crowds in rapt attention. His message was one focused on stirring the hearts of the faithful to be Christian witnesses as each baptized person is baptized into the Jesus Movement. In Jackson, he underscored the necessity of witnessing “to God’s love in this world; not the outcome, but witnessing to God’s truth and love. We need witnesses in the 21st Century.” He stressed that being a witness isn’t about being white or black, or being political, but about being faithful, and not being ashamed to be a Christian.

On Sunday morning, June 12, the world awoke to the news of the mass shooting carried out at a gay nightclub in Orlando, Florida, the worst mass murder in the history of the United States. Forty-nine gay and lesbian people were murdered and 53 others were injured by a lone gunman claiming affiliations with radical Muslim groups, according to multiple news reports.

At the altar in Vicksburg, Curry dedicated Holy Eucharist to the Glory of God and in the memory of those who died or were injured and their families. In his sermon, Curry identified the church as the “human family of God” and urged those present to treat everyone as they would a family member — with respect, dignity, love and rights. Curry said that human and civil rights are life, liberty and the pursuit of happiness, adding that everyone is equal in God’s eye, following Paul’s ideas found in Galatians 3:27-28. 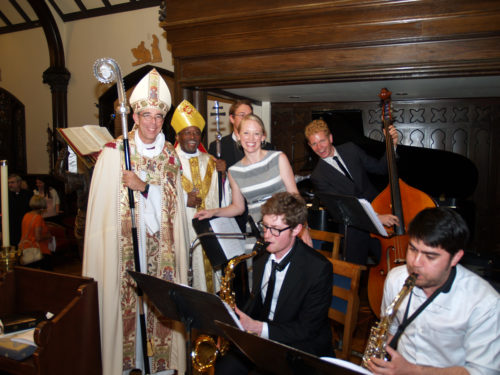 The Theodicy Jazz Collective, a jazz band that has traveled throughout the Episcopal Church offering creative jazz services, formed an important part of the liturgy in Jackson and Vicksburg. The collective “holds the belief … that music has the power to move us beyond barriers among and between us, enabling dialogue and community when mere words are not enough,” according to a flyer sent out to promote the Justice and Jazz event held at St. Philip’s in Jackson, Mississippi, on June 10.

On Monday, June 13, Curry and Mississippi Bishop Brian Seage traveled to the Mississippi State Penitentiary at Parchman. The presiding bishop held worship on the penitentiary grounds at St. Vincent’s Chapel with about 50 inmates attending the service.

“This weekend was a historic and awesome moment for the Episcopal Church in Mississippi,” said Seage. “Bishop Curry brought an enthusiastic message of welcome to all people from the Episcopal branch of the Jesus Movement. We are blessed by his leadership and passion for doing the Lord’s word and telling the story of Jesus’ love.”

As Curry said in his sermon at the cathedral, “We are able to be here together because of people like Medgar Evers who worked for the common good … and if we witness God’s love today, we would turn this world upside down.”