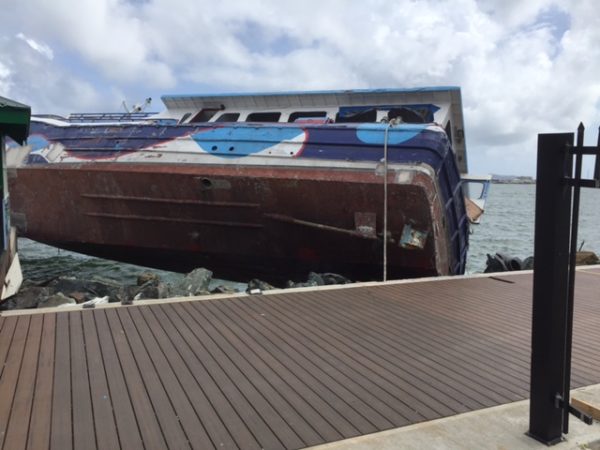 [Episcopal News Service] When the Rt. Rev. Carl Wright’s plane landed on St. Thomas in the U.S. Virgin Islands, he saw an airport full of frantic travelers. The luggage conveyor belt was jammed with generators, batteries and flashlights.

“We planned to visit two parishes to celebrate Holy Eucharist, but we were barred from both by torrents of water. The water was too deep to get through. Although it was more than a month later, it looked as if the hurricane happened yesterday,” Wright told the Episcopal News Service after returning to the U.S. from his mid-October trip.

Both hurricanes Maria and Irma were Category 5 storms when they devastated the Caribbean two weeks apart. Slamming the islands on Sept. 6, Irma was one of the worst storms to come from the Atlantic in the last century, causing catastrophic wind damage and rising water.

After the outcry that Puerto Rico was being overlooked in favor of the places on the continental U.S. by the White House, the American territory earned more attention and help. 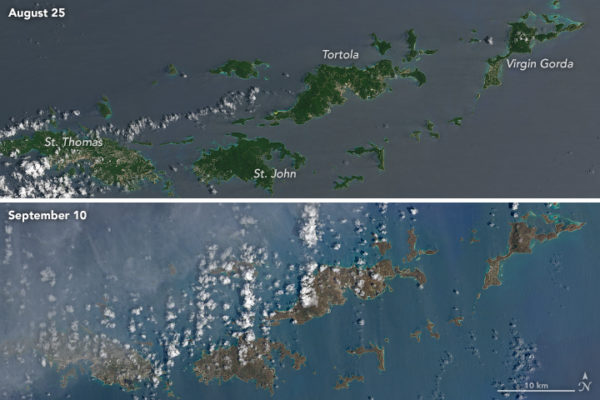 NASA satellite images of the Virgin Islands taken on August 25 and Sept. 10, illustrate the damage done by Hurricane Irma to the vegetation of the islands, turning it brown. Photo: Joshua Stevens/NASA

“I felt like the diocese, although this is a feeling and not an observation, is a forgotten diocese,” Wright said.

The Rt. Rev. E. Ambrose Gumbs, bishop of the Diocese of the Virgin Islands, picked up Wright at the airport and immediately gave him a tour of the damage on St. Thomas. That island, plus St. John, took the brunt of Irma. Then on Sept. 20, St. Croix, the largest major American island that was supporting relief efforts for the first two, took the brunt of Maria.

Hurricane Maria pummeled what Irma spared. It was a cruel one-two punch.

By Oct. 11, which was 21 days after Maria and 35 days after Irma, 78 percent of the homes and businesses on the Virgin Islands were still without power, according to Episcopal Relief & Development.

Wright met with diocesan leaders on Oct. 16 and learned that all 14 churches sustained damage from the storms. He commended Episcopal Relief & Development and adjusters from Church Insurance for their helpful assessments, money and other resources.

“But so much more is needed,” Wright said. “These various leaders, more than 20 leaders of the diocese, are all rolling up their sleeves and doing things in their churches and communities with little or no outside assistance. These folks are working hard.” 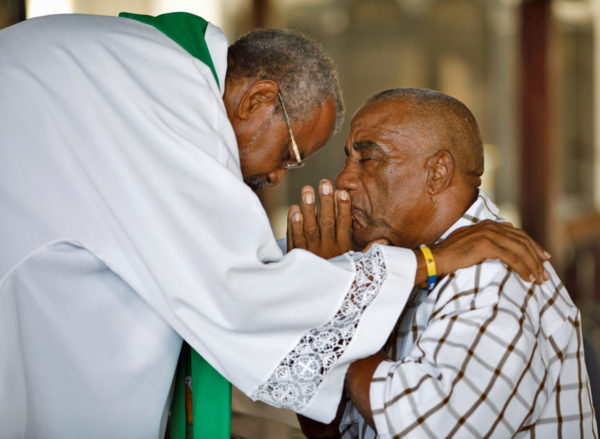 Melville Boddie prays with the Rev. Gregory Gibson during Sunday mass at St. John’s Episcopal Church in Christiansted, 13 days after Hurricane Maria raked St. Croix, U.S. Virgin Islands, on Oct. 1. “I want to tell the people of St. Croix and the Virgin Islands to be strong and to be patient,” said Boddie. “Everything is going to work out.” Photo: Jonathan Drake/Reuters

To Wright, it looked like every roof was damaged, although official reports say some were spared. The Federal Emergency Management Agency deemed the damage severe enough to approve more than $35 million in public assistance grants and more than $8 million for individual Virgin Islanders affected by hurricanes Irma and Maria. Those totals are likely to increase as more requests for help are processed.

Six weeks after Hurricane Maria hit the Virgin Islands, thousands of people still had no power and were stuck with cold and canned food, if they could find it, according to a Nov. 1 report by The Weather Channel. The few grocery stores that have re-opened are accepting cash only.

Much work is to be done.

Because of the damage, school activities were being held in the nave of St. George’s Church on the British island of Tortola, which has the largest kindergarten through 6th grade school in the diocese.

The rector and a relief coordinator were distributing water, flashlights, beans and fruit to everybody in their community. “They’re doing notable work in that regard,” Wright said. 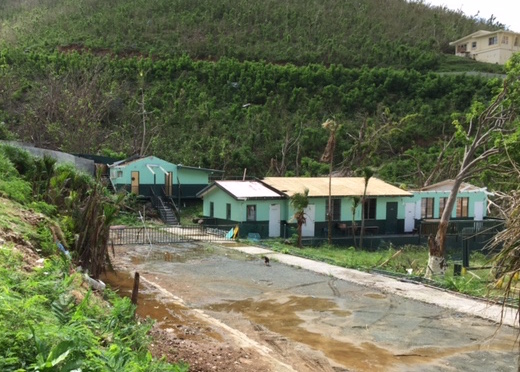 St. Mary’s in Virgin Gorda, a British territory, is a small, remote parish that Wright described as “damaged and very stark.”

The islanders are working together because they feel there’s not enough outside or government help yet, he said. Left to their own devices, they’re trying to find their own resources. And they are cooperating with an admirable sense of community spirit.

“In that diocese, none of the parishes are separate from the community. All are an integral part of the community, almost indistinguishable from one another,” Wright said. 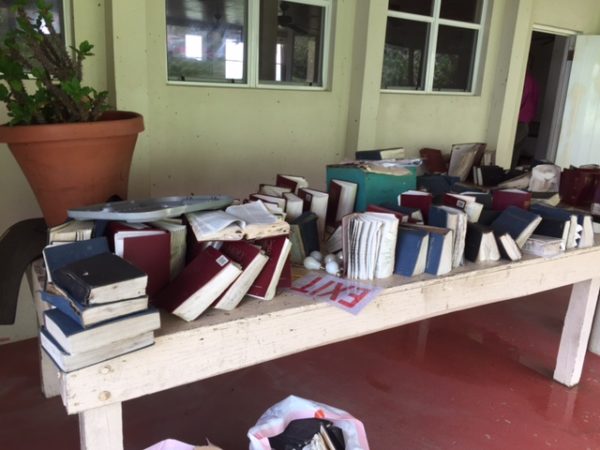 When Annette Buchanan, canon and national president of the Union of Black Episcopalians, heard from Wright that the islanders were in dire need of solar flashlights, she wanted to use her organization to help in this specific way. Battery-powered flashlights run out fast, and there’s hardly anywhere on the islands to buy new batteries, she learned.

“It’s a small thing, but we wanted to give them something they wanted,” Buchanan told ENS.

Many UBE members have relatives on the Virgin Islands, and some members are from the territories themselves, so the UBE has had a close relationship with that diocese over the years, she said.

The UBE already had a more general fundraising drive for hurricane relief, which goes directly to Episcopal Relief & Development. But Buchanan is leading this second fundraiser to gather enough money for an initial shipment of $1,000 worth of solar flashlights to the Virgin Islands specifically. She hopes it can be shipped by the end of November. The UBE is coordinating the effort with Wright and Gumbs to ensure the donation is shipped the right way and to the best location.

“We just want to draw to the larger church’s attention that this diocese is in such dire straits, that they’re still in hurricane recovery mode,” Buchanan said. “We are concerned about them, and there hasn’t been much publicity about the Virgin Islands after the hurricanes.”

Donations of supplies can go directly to parishes or the diocese with proper communication about specific needs and locations, Wright said. Monetary donations can go to Episcopal Relief & Development, which will place the help in the proper hands. You can do so online here.