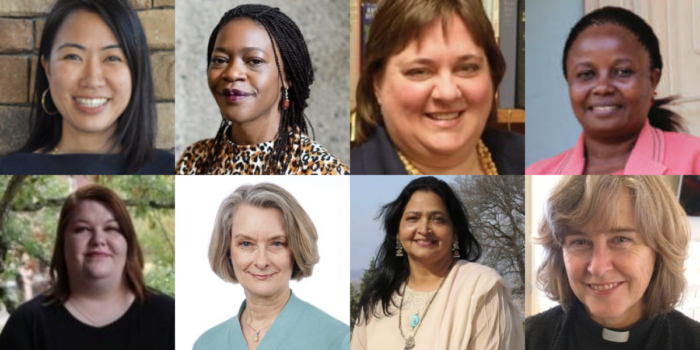 “Do women bring distinctive gifts and experiences to mission service?” asked Ms. Elizabeth Boe, moderator for a plenary panel of women missionaries at the churchwide Global Mission Conference held online, May 12-14, by the Global Episcopal Mission Network (GEMN). Boe was asking the question as mission personnel officer in the Episcopal Church’s Office of Global Partnerships.

“Women bring a sensitivity to human needs and emotions and concerns that is very important in the work of mission, and it makes a difference,” responded the Rev. Glenda McQueen, partnership officer for Latin America and the Caribbean. She noted that the work that missionaries do, for instance digging wells, functions as an occasion for entering into relationships of love and care with the local community.

“All over the world, women have a unique experience in that they live under the patriarchy, and that is something I can share with women all over,” said Ms. Sophie Swallow, currently a Young Adult Service Corps (YASC) missionary with the Guatemala Youth Initiative. “We already know there is something to change. From when I was a child in Sunday School I knew there was something that needed to be done. That’s something that I bring like a fire in my belly to every interaction that I have as a young woman missionary in the 21st century.”

“Yes, there are things about identifying as female that make a difference for me as a missionary and for our church and for global mission – and there’s a lot that doesn’t,” said the Rev. Melanie Slane, who served for two years with YASC in the Philippines.  “No matter how you identify your gender or your sexual orientation, the world needs more sensitive and compassionate people.”  Slane noted that women as well as men participated in earlier patterns of colonial violence in mission, but she concluded, “The women who came before me helped make a space for me to serve as a missionary in my context.”

“Mission is about relationship,” said Boe, reflecting a view widely shared in mission circles. “That can be vulnerable, scary, aggravating. Still, we’re called to love people the way God loves all of us. God’s mission in the 21st century is about being, about becoming the best person we can be.” Recalling her experience of learning Swahili at language school in Tanzania, Boe stressed that knowing the local language is important for communication in mission.

One hundred fifty-nine people registered for the conference from throughout the Episcopal Church and 19 countries. In addition to plenaries, the conference included 11 workshops and a number of Mission Spotlights and Mission Testimonies.

Mission at the United Nations

As she reviewed the history of the UN and the work of women at the UN, including Episcopalians and Anglicans, Main said the international organization’s emphasis on human rights and on the dignity of the human person reflects gospel values.  She stressed an “understanding of global mission as transformational partnership.”

Main’s address was the first time UN work was highlighted at a conference sponsored by GEMN, and attendees responded enthusiastically to her talk.  Main summarized the church’s work at the UN under the headings of a ministry of presence, a ministry of advocacy and a ministry of hospitality, and she noted that she is part of the team at the Office for Global Partnerships.

The conference opened with a plenary address, “’Talitha Cumi’: Historical Issues for Women in World Mission, by Dr. Dana Robert, distinguished professor at Boston University and director of its Center for Global Christianity and Mission.

“Laywomen have always been the backbone of the mission of the church,” Robert said as she reviewed the work of women in the early church, the roles of widows and deaconesses, and the prominence of women in the mission work of Protestants and Anglicans. She noted that women missionaries’ earlier emphasis on working with women in their homes abroad was not a domestication trap but rather activated a crucial lever for social transformation.

Women’s global mission work has been holistic and focused on healing, Robert said. Women have engaged in ministry from the margins, and their work has been the starting point for gender justice work. Speaking as a United Methodist laywoman, Robert brought a broad ecumenical perspective to her historical survey.

The work of the Mothers’ Union (MU) in Africa was the focus of the plenary address by the Rev. Carolyne Adhola from the Anglican Church of Kenya. “The Mothers’ Union is a form of contextualized mission,” Adhola said as she explained the MU’s work to care for people affected by HIV/AIDS and to advocate for the just distribution of land.

Adhola cited her personal experience, as a young widow, of being dispossessed of property by her deceased husband’s family because she did not renounce her faith and participate in a form of African traditional religion. She noted that it would have been difficult to survive that experience without the MU’s support.

“The Great Commission is our theme,” Adhola declared, “to go out not only to Christians or women but to the ends of the world.”  Noting that in east Africa Christians are often challenged by Muslims “who claim they know the Bible better than we do,” Adhola advocated for dialogue across religious divides.

Adhola spoke at short notice in place of Dr. Hilda Kabia, dean of Msalato Theological College in Dodoma, Tanzania, whose presence at the conference was interrupted by internet difficulties.

Conference worship was led by Mothers’ Union women in Mozambique; the Tsedaqah Community/Triangle of Hope companionship of the dioceses of Liverpool in England, Kumasi in Ghana, and Virginia in the USA; and the Society of St. Margaret in Haiti, Massachusetts and New York.

Workshops featured the Rev. Dr. Helen Van Koevering on women in Mozambique; Dr. Chiseche Mibenge on Episcopal Relief and Development’s work with women; the Rev. Rebecca Yarborough and a panel of women in Costa Rica; the Rev. Heather Melton on the United Thank Offering; Ms. Prita Samantaroy on the Diocese of Amritsar’s work with women in north India; the Community of the Transfiguration on their work in the Dominican Republic; Dr. Laura Sarraff on women’s mission work in Cuba; Bp. Francisco Duque and a panel of Colombian indigenous women; Ms. Alice Garrick on the work of the women’s program in the Diocese of Raiwind, Pakistan; Ms. Liz Ha on the work of Five Talents; and the Rev. Kyrie Kim on Korean women in mission.

Mission Spotlights featured the Rev. Dr. Katherine Grieb on Virginia Seminary’s Center for Anglican Communion Studies; Dr. Gina Zurlo on the recently published 3rd edition of the World Christian Encyclopedia; Dr. Catherine Meeks on the work of the Absalom Jones Center for Racial Healing in Atlanta; the Society of St. Margaret on their work in Haiti; Mr. Vincent Dixon on the work of Stand with Iraqi Christians; the Rev. Holly Hartman on GEMN’s Mission Formation Program; Mr. Greg Lowden and Ms. Sophie Swallow on the Guatemala Youth Initiative; the Rev. Dr. Chuck Robertson on the upcoming Lambeth Conference this summer; and Ms. Jenny Grant on the Global Mission Digital Toolkit and the Standing Commission on World Mission’s recently published “Becoming a World where Love is the Way: Guiding Principles for World Mission.”

Christianity has always been majority female, world Christianity can be described as a women’s movement, and the worldwide missionary movement is at least two-thirds female, said GEMN president the Rev. Dr. Titus Presler in welcoming remarks as he cited assessments from the World Christian Encyclopedia.  “So it is high time that this 27th annual conference of Episcopal global mission activists focus on the theme of Women in Mission,” he said.

Videos from the conference will soon be available on the GEMN website.  Founded in 1994, GEMN is a network of dioceses, agencies, congregations, seminaries, and individuals whose purpose is to gather, inspire and equip people to participate in God’s mission.  The network identifies humility, inclusion and companionship as its core values in global mission.