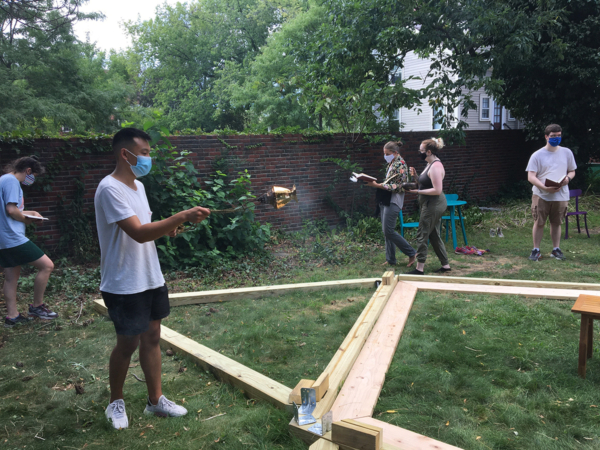 On Sunday, October 4, the Episcopal Chaplaincy at Harvard (ECH) will hold the official consecration of a sacred tent constructed for outdoor and mobile worship. Chaplain Rita T. Powell and Massachusetts Bishop Alan M. Gates will lead a socially distanced liturgy in the Chaplaincy’s backyard at 2 Garden Street, weaving centuries-old Christian tradition with the invitation to question inherited religious norms. Powell describes the tent as “a structure…which can point us both inward, to the sacred body each of us carries, the sacred body of the gathered ones, and outward,  to the world itself as the dwelling of God.”

Powell began to conceptualize the tent last fall as a way to challenge churchgoers’ expectations of where they can encounter the divine. Young people’s involvement in church is on a steady decline: a recent survey by the Harvard Crimson found that only 17% of incoming freshman identified as Protestant in 2019, compared to 20% in 2017. For students who are seeking meaning or connection to Christianity but feel alienated by traditional church settings, the tent offers an alternative — one that has become even more relevant as churches on and near campus remain closed for COVID. “‘Tent,’ for us, has become shorthand for not-inherited worship space that doesn’t come with a lot of weird historical or political baggage…that meets our evolving needs as Christians,” says Matthew Gin, chaplaincy student and leader of the tent project.

To conceptualize, design, and construct the tent, Powell partnered with Benjamin Bromberg-Gaber, an architectural designer who studied at both the Jewish Theological Seminary at List College and Harvard Graduate School of Design; Matthew Gin, a historian of architecture who recently earned his Ph. D. from the Harvard Graduate School of Design; and Prof. Charles M. Stang, a professor of theology at Harvard Divinity School. The Episcopal Church and the Episcopal Diocese of Massachusetts each awarded the Chaplaincy with innovation grants to fund this project. Powell plans to use the tent for streamed worship during the current socially distanced academic year, and eventually, as a portable venue for performance, contemplation, and gathering.

About the Episcopal Chaplaincy at Harvard: ECH serves a loosely constellated community of undergraduates, graduate students, professors, and others at Harvard University. Led by the Rev. Rita Powell and Kellogg Fellow Meredith Wade, the Chaplaincy cultivates creative, critical spirituality rooted in the Episcopal tradition.