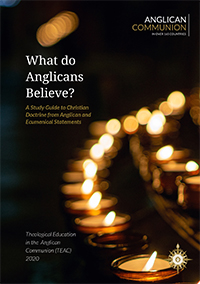 The Anglican Communion has today published a new international study guide to help theological students around the world answer the question “What do Anglicans Believe”. The study guide is an introduction to Christian doctrine and draws on both Anglican and ecumenical statements of belief.

The study guide introduces a number of ecumenical texts and then asks questions to help students consider the practical application of the agreements in the life of their churches; including whether or not the life of their church “demonstrates that it is of Jesus Christ and what he does”; and how churches can show this more clearly.

In addition to use in theological colleges, it is envisaged that the study guide will be used by Christians across the world in home groups and study programmes.

The Anglican Communion is a family of 41 independent but inter-dependent churches around the world which trace their roots to Saint Augustine’s mission to convert the British in AD 595 and with continuing links to the Archbishop of Canterbury. It is the third largest Christian denomination globally, after the Roman Catholic and Orthodox Churches, and is present in more than 165 countries around the world.

The Anglican Communion’s Director for Theological Education, the Revd Dr Stephen Spencer, explained that the study guide builds on dialogue about doctrine that Anglican Churches have had with each other, and with other churches across the world ever since they were formed, saying: “over recent decades these conversations have produced a rich and authoritative collection of agreed statements, written by Anglican theologians in partnership with theologians from other churches, to create a broad and rich map of the Christian faith as it has been received and handed on by these churches.”

Dame Mary Tanner, who previously served as both European President of the World Council of Churches and as Moderator of its Faith and Order Commission, welcomed the new study guide, describing it as “such an important guide on Christian doctrine from Anglican and ecumenical sources.”

She said: “It offers such a good, engaging way to help students and clergy become familiar with ecumenical documents in a way that is relevant for their own lives and local experiences in worship and in mission and to ensure that that work is not forgotten. And it’s use of questions to readers will draw them into the subject. It is just what the Faith and Order commission in my day would have hoped for ie. receiving the fruits of the convergence statements in changed lives and in changed, closer relations with others who could also recognise the faith of the church in the documents.”

The study guides can be downloaded free of charge in English, Spanish, French and Portuguese from anglicancommunion.org/teac.

The full title and ISBN number for each edition is:

The 41 member churches (provinces) of the Anglican Communion are:

In addition, there are five extra-provincial churches within the Anglican Communion, under the oversight of the Archbishop of Canterbury: