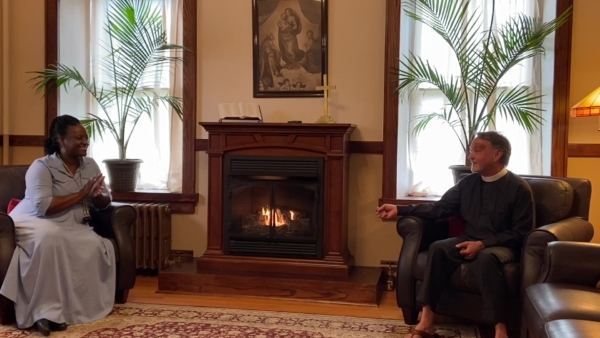 Pastor Navella George discussed the impact of the death of George Floyd with the Reverend Canon Robert Griner during an episode of the You Tube series, “Conversations with the Canon,” in June 2020.

As a joint project during the season of Lent, more than 40 parishioners from two Newton churches, Christ Episcopal Church and Mount Calvary Baptist Church, participated in a five-week discussion series, “Crossing the Divide:  Brave Discussions about Race,” with the goal of developing racial literacy and educating each other on racism and its impact.  The idea for the series sprang from ongoing conversations between the Reverend Canon Robert Griner, Christ Church, and Pastor Navella George, Mount Calvary, following the death of George Floyd in June 2020.  The weekly series was facilitated by the Reverend Canon Gregory Jacobs, former Canon to the Ordinary in the Episcopal Diocese of Newark.  Jacobs emphasized the creation of a brave and open space for all participants, who ranged in age and experiences, as they moved towards establishing The Beloved Community, an idea stemming from Martin Luther King’s vision of an equal and just society.  The two churches have a history of working closely together, including pulpit exchanges, prayer breakfasts, fellowship events, talk show appearances, and anniversary celebrations, endeavoring to convey an overarching message of hope, empowerment, and support of one another.

Mount Calvary Baptist Church is home to a historically African American congregation led by Senior Pastor Navella George, while Christ Episcopal Church, led by the Reverend Canon Robert Griner, is of predominantly European heritage.  The series was held on Monday evenings and facilitator Jacobs led participants through selected topics each week, including personal hopes and fears, individual experiences with discrimination, white privilege, the Black Lives Matter movement, and ideas for future action.  Each session was framed with readings from Catherine Meeks’ Living into God’s Dream: Dismantling Racism in America.

“I could no longer sit back and watch the divide in our country grow ever wider without doing something,” explained Griner regarding his reasons for initiating the project with George and the Mount Calvary Baptist Church congregation.  “By the grace of God, we have developed a sense of trust and affection for one another necessary to talk about something as difficult as race.”

The culmination of the shared activity featured a pledge of solidarity by all participants to continue learning from each other and working together to build The Beloved Community.  Ideas for healing activities were also developed for use by the two churches with the goal of implementing them in the larger community.

“This experience allowed us to share openly about our personal experiences with racism in its many forms without fear of judgement,” commented one participant who wished to remain anonymous.  “It was comforting to establish new relationships with our brothers and sisters in Christ, honor our respective heritages, and discuss ways in which we might be able to walk together in the future to combat discrimination based on the color of our skin.”