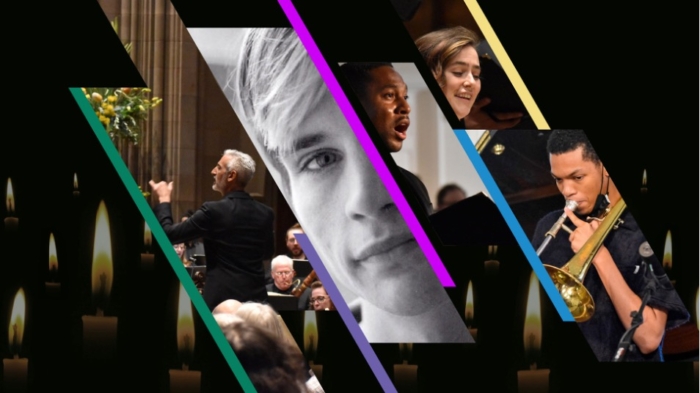 Trinity Church Wall Street is delighted to announce the upcoming fall music season, which will include the return of Bach at One, performances by NOVUS NY, and Handel’s Messiah, alongside a new jazz concert series and dynamic collaborations.

“We’re thrilled to invite our neighbors and New York City back to Trinity for a robust music season this fall, including jazz concerts, Considering Matthew Shepard, and the ever-popular Messiah. We see music as a unifier, a healer, and a window to the Divine,” said the Rev. Michael Bird, Vicar of Trinity Church Wall Street. “This fall music season continues our commitment to providing world-class programing and music that is accessible and enriching to all.”

September 27 through October 8, The Choir of Trinity Wall Street heads to Park Avenue Armory with composer, conductor, multi-instrumentalist, and MacArthur “Genius” Tyshawn Sorey for Monochromatic Light (Afterlife): a tribute to composer Morton Feldman, who wrote music for the opening of the Rothko Chapel in Houston 50 years ago. The resulting score provides the listener with the feeling of being enveloped in sound in much the same way that Mark Rothko’s paintings reveal ever-changing and immersive shades of color and texture.

On October 3 at Carnegie Hall, Trinity and Opus 3 Artists present a free performance: a rare concert of all of Lukas Foss’s works with GRAMMY-winning conductor JoAnn Falletta and the Buffalo Philharmonic Orchestra, featuring Downtown Voices and The Choir of Trinity Wall Street. This gift to the City celebrates the centennial of Foss, the former music director at the Buffalo Philharmonic and a prolific composer who shaped 20th-century American music.

Trinity’s Concerts at One weekday series, deemed “the top of musical life in New York” (The New York Times), will also return to St. Paul’s Chapel this October and November. A new Jazz at One series will take place every Tuesday from October 11 through November 22 and will feature an eclectic mix of brilliant jazz artists in collaboration with JAZZHOUSE@Trinity. On Wednesdays from October 12 through November 16, Concerts at One will present an array of Trinity’s favorite “at one” series, including a Pipes at One recital, two Bach at Ones led by Avi Stein, a special performance by featured guest artists ChamberQUEER, and two concerts featuring NOVUS NY.

The “expert and versatile musicians” (The New Yorker) of NOVUS NY will celebrate George Crumb in two concerts titled, Voice of Crumb. Crumb’s works will be paired with Bartok, who influenced the ground-breaking composer, and Crumb’s pupil Jennifer Higdon. Works will include Crumb’s Voice of the Whale and American Songbook No. 1, alongside Bartók’s Divertimento, and works by Higdon. Featured NOVUS performers on the series include concertmaster Katie Hyun, pianist Conor Hanick, Sandbox Percussion, and members of The Choir of Trinity Wall Street.

Additional season highlights include the Trinity Youth Chorus and Downtown Voices concerts on Sundays. The Trinity Youth Chorus with the Trinity Baroque Orchestra will perform Vivaldi’s Gloria and Durante’s rarely performed Magnificat in a special Compline service on October 30, conducted by Melissa Attebury. On November 13, Stephen Sands conducts Downtown Voices with NOVUS NY in works by Undine Smith Moore, Florence Price, and David Hurd. These compositions musically explore the anthem: a song that represents ideals, and how we are inextricably linked in our human experiences.

Advent will be a festive season as in-person celebrations return to Trinity Church and St. Paul’s Chapel. Compline By Candlelight: Lessons and Carols on December 4 will feature Downtown Voices, St. Paul’s Chapel Choir, and the Trinity Youth Chorus in this cherished holiday tradition. The service of Lessons and Carols tells the Christmas story through readings and musical illuminations and will be conducted by Stephen Sands, Thomas McCargar, and Melissa Attebury.

On December 9 and 10, Trinity will mark the return of Handel’s Messiah, which the New York Times once declared, “stands apart as New York’s best.” Popular choruses from the work will also be presented on Sunday, December 11, alongside Christmas carols and other holiday favorites in a special concert, featuring all of Trinity’s ensembles. To round out holiday musical offerings, the Trinity Youth Chorus will present Britten’s Ceremony of Carols, conducted by Melissa Attebury, with Caroline Cole on harp, on December 18.

The Choir of Trinity Wall Street and Trinity Baroque Orchestra, under the direction of Avi Stein, bring their esteemed Bach interpretations to Salle Bourgie in Montreal on October 30.

On November 19, NOVUS NY joins celebrated Brazilian pianist and conductor João Carlos Martins as he makes his return to Carnegie Hall to conduct a program of Bach and Brazilian music, including a world premiere by André Mehmari.

The Choir of Trinity Wall Street returns to Carnegie Hall on December 4 for a special performance, “Notes from Ukraine,” presented by the Ukrainian Institute – Kyiv, Ukrainian Contemporary Music Festival, and Razom for Ukraine. This concert will celebrate 100 years since the North American premiere of Mykola Leontovych’s Shchedryk—the original choral work that became the famous “Carol of the Bells.” The performance will highlight works and performers from both Ukraine and the U.S., including a world premiere by Trevor Weston, showing the power of music to connect people across cultures.

In January 2023, Trinity’s long-term relationship with the PROTOTYPE Festival and its ground-breaking co-producer, Beth Morrison Projects, brings us the New York premiere of Pulitzer Prize-winner Du Yun’s latest opera, In Our Daughter’s Eyes, as well as a stunning new opera by Emma O’Halloran titled, Trade, which will feature NOVUS NY. In the past, Trinity and Beth Morrison Projects have collaborated on two Pulitzer Prize-winning operas: Du Yun’s Angel’s Bone and Ellen Reid’s prism.

Trinity is dedicated to promoting lifelong engagement with music through a comprehensive program and free access to educational opportunities, cultural activities, and Trinity’s acclaimed performances. Led by Melissa Attebury, the music education program provides many opportunities for youth to participate in the Trinity Youth Chorus and afterschool activities at Trinity Commons, and serves our students in local schools by providing music education enrichment courses.

Classes for youth include songwriting, music theory, and a new audition-preparatory coursework for entering performing arts high schools. Trinity’s diverse team of teaching artists also provide instruction in chorus, movement, songwriting, guitar, ukulele, and recorder in several schools in Chinatown as part of a longstanding partnership with the Chinese American Planning Council, PS 18 in Queens, and PS 19 in the Bronx.

All performances are free and open to the public unless otherwise indicated.

Tickets can be purchased here

Tickets are available for free in person at the Carnegie Hall Ticket Office prior to the October 3 performance (up to 4 per person, first come, first served) | More information is available here

Concerts at One: The Voice of Crumb Part 1

Concerts at One: Pipes at One

Concerts at One: Bach at One

Concerts at One: Bach at One

Concerts at One: The Voice of Crumb Part 2

Crumb American Songbook No. 1: The River of Life: Songs of Joy and Sorrow

From Bach to Brazil

Notes from Ukraine: A 100-Year Celebration of Carol of the Bells

Works by Lunyov, Shalygin, Bernstein, and others

Tickets can be purchased here

Du Yun In Our Daughter’s Eyes

Trinity Church Wall Street is a growing and inclusive Episcopal parish of more than 1,200 members. For more than three centuries, Trinity has been a part of the fabric of New York City-weaving together a vibrant and diverse parish of people of all backgrounds from the five boroughs and surrounding area. The parish is guided by its core values: faith, integrity, inclusiveness, compassion, social justice, and stewardship. These principles are the reason Trinity champions justice and equity through public advocacy, neighborhood outreach, and financial resources. More than 20 worship services are offered every week online and at its historic sanctuaries, Trinity Church and St. Paul’s Chapel, the cornerstones of the parish’s community life, worship, and mission, and online at www.trinitywallstreet.org.