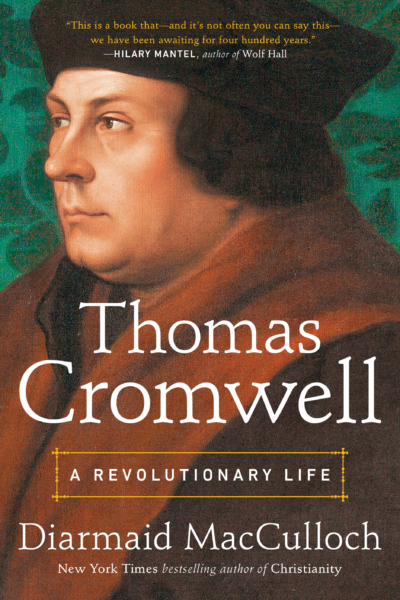 “This is a book that—and it’s not often you can say this—we have been awaiting for four hundred years.”—Hilary Mantel, author of Wolf Hall

“…a landmark portrait of a complex, confounding man.”—Booklist (starred review)

“Triumphant and definitive… This is a masterpiece of documentary detective work, which buzzes with the excitement of a great historian immersed in archives. Acute, elegant and devastating.”—Dan Jones, Sunday Times

“This biography is a major work of scholarship of the type that will reset academic understanding of Tudor politics for a generation … and golly, can MacCulloch make a Tudor paper trail seem exciting.”—Kate Maltby, Financial Times

“One of the leading historians of the English church offers a nuanced and appreciative but not hagiographic portrait of [THOMAS CROMWELL]…..A deeply researched, important biography that will set the standard for future Cromwell studies.”—Kirkus Reviews

“Thomas Cromwell has famously defied his biographers, but no more. Diarmaid MacCulloch’s book is subtle, witty and precisely constructed. He has sifted the vast archive to clear away the accumulated error, muddle and propaganda of centuries, allowing us to see this clever and fascinating man better than ever before, and in the mirror of his times. This a book that—and it’s not often you can say this—we have been awaiting for four hundred years.”—Hillary Mantel, author of New York Times bestseller Wolf Hall

After a decade of researching the Royal Archives, the award-winning and New York Times bestselling author of Christianity, Diarmaid MacCulloch, has emerged with the most thoroughly researched and complete biography of Thomas Cromwell—a polarizing political figure most known for his unwavering service to volatile King Henry VIII, the demise of Anne Boleyn, and his hand in the Reformation. THOMAS CROMWELL: A Revolutionary Life (Viking; On Sale: October 30, 2018; 9780670025572; $35.00) sheds light onto a fascinating part of history—one that helped shape the course of English politics and the future of Protestant religion.

Since Cromwell’s life met its end on the scaffold in 1540, history has not been kind to this self-made commoner who rose from obscurity to become the architect of England’s split with Rome. However, in THOMAS CROMWELL, MacCulloch unveils a more sympathetic figure. Was Cromwell the villain of history or the victim of its creation? MacCulloch sifted through letters and court records for answers and found Cromwell’s fingerprints on some of the most transformative decisions of Henry’s turbulent reign. However, he also found Cromwell the man, an administrative genius, and loving father.

In THOMAS CROMWELL, MacCulloch dispels popular myths—he was an ally of Anne Boleyn in their efforts to promote the Reformation; he master-minded the dissolution of the monasteries; he helped Henry VIII build a brutal tyranny—while tracing his life and influences. Despite being unable to control the violent humors of his King, Cromwell made his mark on England, setting her on the path to religious awakening and indelibly transforming the system of government of the English-speaking world. With accounts of a narcissistic, volatile ruler, shrewd political operatives, and an upset of existing order domestically and internationally, this biography illuminates a history that may not repeat, but certainly rhymes.

Impeccably researched and written in riveting prose, THOMAS CROMWELL is the Mount Everest of historical biography: the big and daunting missing puzzle piece in the endlessly riveting story of Henry VIII and his shamefully ill-treated wives.

ABOUT THE AUTHOR:
Diarmaid MacCulloch is Professor of the History of the Church at Oxford University. His books include Thomas Cranmer: A Life, which won the Whitbread Biography Prize, the James Tait Black Prize, and the Duff Cooper Prize; The Reformation: A History, winner of the National Book Critics Circle Award and the Wolfson Prize; and Christianity: The First Three Thousand Years, a New York Times bestseller that won the Cundill Prize in History. An Anglican deacon, knighted in 2012, he has presented many highly celebrated documentaries for television and radio. He lives in Oxford, England.