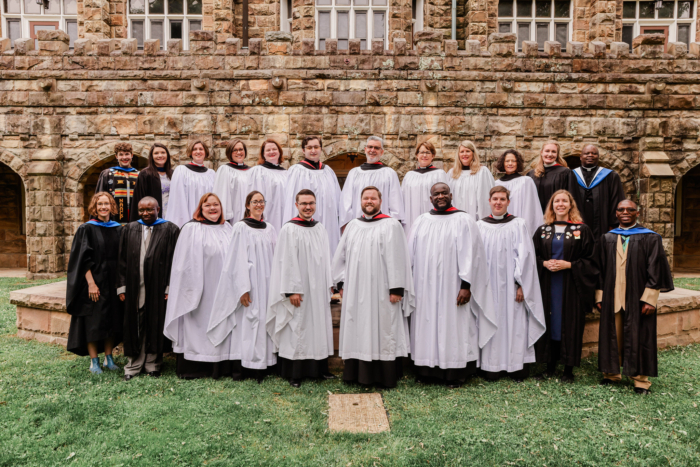 The 2021 graduating class of the School of Theology.

On May 16, the School of Theology held its 164th Convocation for the Conferring of Degrees. This year the ceremony was held outdoors on Hardee-McGee Field without masks due to the easing of the Covid-19 restrictions. For the first time in a year the School’s choir was able to sing unmasked and together. Families and friends of the graduates were invited to attend in-person. The University Chancellor Bishop Robert Skirving, Diocese of East Carolina, preached as the sun shown on the stadium. There was so much to celebrate!

The School of Theology holds several events leading up to a Convocation for the Conferring of Degrees. In the weeks prior, senior awards were presented at the semester’s final Eucharist service and the Children’s Crossing service was held for the families of the seminary community. It all culminated on Sunday with the seminary graduating 26 students receiving varying degrees from Vice-Chancellor Reuben Brigety. Many of the University’s leadership was in attendance, among them were the Chancellor Robert Skirving, University provost Nancy Berner, University Chaplain Peter Gray, and the School’s Dean, the Very Rev. James F. Turrell.

During the Wednesday community Eucharist on May 5, Turrell and Brigety announced some of the outstanding achievements by the graduating class. This year’s prizes were presented to the following seniors:

Awards previously given to members of the class of 2021 included: