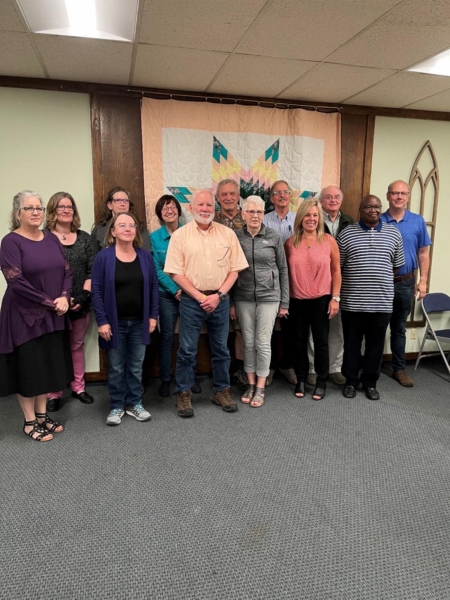 “Vestry of St. George’s, Bismarck with their Rector, Hal Weidman along with Valori Mulvey Sherer and Martin Darby from Partnership for Renewal.”

The Episcopal Diocese of North Dakota and Partnership for Renewal (PfR) have announced that they have signed an agreement to work together to enhance congregational development and vitality in the Diocese. This effort is being funded by the Revitalization and Renewal Fund of the Diocese of North Dakota and a grant to Partnership for Renewal from Trinity Church, Wall Street.

In introducing the initiative, the Rev. Steve Godfrey, Diocesan Minister said “Our Diocesan Discernment Task Force and Diocesan Council have identified congregational development as an important goal. The Congregational Development Committee worked hard to identify partners to support these efforts and selected the Partnership for Renewal, who has a track record in supporting new growth in congregations that are large and small, urban, suburban, and rural, and in different kinds of cultural contexts, aligning with the diversity of our diocese.”

The Rev. Dr. Valori Mulvey Sherer and Martin Darby, Co-Executive Directors of PfR commented “We are delighted to be working with the Diocese of North Dakota. At Partnership for Renewal we are dedicated to enabling churches of various sizes, shapes, and histories to be agile and resilient in our shifting religio-cultural environment. We do this by engaging with individual churches in a variety of ways so that the divine purpose for each congregation is discovered or re-discovered and then nourished and nurtured, and launched with concrete goals, tools, and support for the journey.”

Tammy Enockson, a member of St. George’s and a renewal team trainee with PfR observed “It is an exciting week for the Congregational Development Committee. After months of discussion, research, planning and numerous setbacks, we started the first of many retreats led by Valori and Martin of Partnership for Renewal.”

“As a silent observer of the first retreat with St. George’s vestry, it was inspiring to watch vestry members dig deep into their understanding of who they are as individuals and as a community of faith. Some of the work was deeply personal and some of it was collectively wrestling with old topics in a new framework, but all of it was cantered on God’s work in us and in the world around us.”

The Rev. Kim Becker, Northwest Regional Coordinator for the Diocese serves St.Peter’s, Williston and several other churches in the northwestern corner of the Diocese, remarked “Partnership for ReNEWal “is not a cookie-cutter program, but rather a spiritual discernment process in which congregational leaders claim existing spiritual gifts and assets, as well as identify core values that equip them to achieve goals that align with God’s divine purpose for their particular congregation. During the challenges of the pandemic, Partnership for Renewal gives much-needed hope to churches struggling with low attendance and low morale. To skeptics, I would say: research their track record. Numbers don’t lie, but numbers were never the goal; they are, however, the outcome of spiritual rebirth. Valori and Martin are sensitive to the effects of intergenerational trauma, of special importance in working with Native congregations. This is an approach in which we are all co-creators with Creator. The direction taken might be a surprise, but our God is a God of surprises!”

Partnership for Renewal is training a group of renewal teams in the Diocese so that they can carry on its work, will compensate those trainers, and license them to use its materials. In addition, PfR is in conversation with several other dioceses to explore similar collaborations. More information is available from: