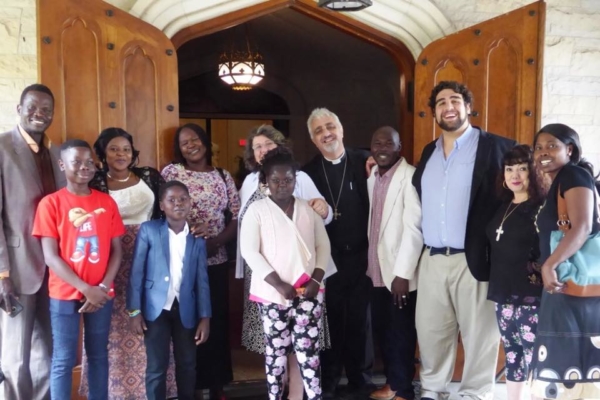 Professionally developed English programs for Speakers of Other Languages (ESOL) are conducted right around the corner from St. John’s Cathedral in Jacksonville, Florida. Catholic Charities and Florida State College at Jacksonville have classes that meet multiple days per week with trained ESOL teachers, and many of the Sudanese and Syrian refugees who attend St. John’s are enrolled. Why then, does St. John’s offer English classes on Sunday mornings?

St. John’s program, Coffee and Conversation, has a dual purpose: to improve refugees English speaking skills in a relaxed environment, and to provide the opportunity for the refugees and parishioners to build relationships with each other. Coffee and Conversation takes place every Sunday morning at 10 a.m. on the third floor of Cathedral House in a cozy room with plump sofas and chairs. It’s a comfortable place for refugees to build confidence using their English language skills while engaging in conversations with other parishioners. This past winter and spring, participants played all kinds of language-learning games—sometimes with comic prizes—discussed and compared cultural mores and used lots of picture cards. After five months, all participants improved, and new friendships were formed. Best of all, there is no homework or tests!

Many of the refugees, originally from South Sudan, spent up to twelve years in refugee camps in Egypt before obtaining Refugee Visas to come to the U.S. While in Egypt, they worshipped with The Reverend Raja Zabaneh at All Saints Episcopal Cathedral in Cairo. Once in the U.S., they reconnected with him at St. John’s Cathedral. Father Raja, currently Chaplain to the Cathedral Residences, and his wife Lily, began a ministry to help with the resettlement of refugees in Jacksonville. They readily developed relationships and offered moral support while conversing in their native Arabic language which the refugees also spoke. Communication for the rest of the congregation, however, wasn’t so easy as parishioners expressed interest in welcoming the new refugees and sharing American culture.

To address the challenge, a parishioner, whose career included administration of ESOL programs and training ESOL teachers, suggested the Coffee and Conversation concept. A satchel of ESOL games, conversation starters and informal language activities was created, and a small group of volunteers took on the project. The activities could be conducted with minimal planning and volunteers added their own spontaneous conversation. Volunteers also laughed at themselves as they mispronounced Arabic words which helped the refugees to relax when they sometimes struggled with English.

Members of the Cathedral have embraced the new ministry donating furniture, sometimes unsolicited funds, and other essentials. Approximately 24 immigrant and refugee families receive friendship, occasional individual help and guidance from Father Raja. Eight of the families attend St. John’s. Earlier in the year, a study group was formed to explore ways in which parishioners might more fully participate in helping refugees towards independence in their new country. Among new ideas under discussion, an activity is being planned for early fall to provide household items that may still be needed as part of an American housewarming event. Diverse friendships are growing at St. John’s.