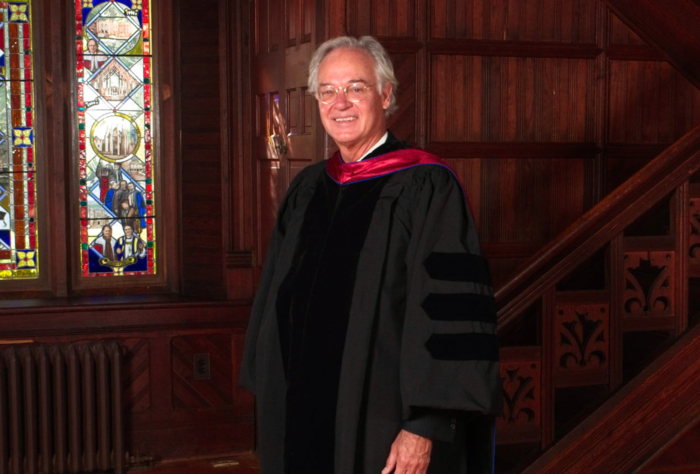 The Very Rev. Sam Candler, Dean of the Episcopal Cathedral of St. Philip in Atlanta, was awarded an honorary Doctor of Divinity degree by the University of the South last month for his “exemplary willingness to take on the hard soul work of Christian responsibility and carry on that work faithfully and lovingly,” particularly in his lifelong devotion to faithful parish ministry.

The Very Rev. James Turrell, who was installed as Dean of the School of Theology at Sewanee during the same service at All Saints’ Chapel in Sewanee, Tennessee, remarked that Candler is a “true son of the South” who has “labored devotedly under the burden of its peculiar history.” Turrell also said that throughout his career in a variety of parishes, Candler has had an “elegant, compelling, and accessible voice of . . . Good Faith and the Common Good.”

Candler thanked the Sewanee community at a gala dinner following the service: “I have given my ordained life in the Episcopal Church to parish ministry, over and over again; and, for me, Sewanee, and the University of the South, are the epitome of parish ministry. It is holy life. Faithful people, through thick and thin, learning and living with each other, in the presence of grace and in the presence of God, are what parish ministry is.”

Also recognized for their exemplary work in the Episcopal Church were Quintin E. Primo III, Board Chair of the Church Investment Group, and Thomas Murray, University Organist and Professor Emeritus at Yale School of Music and the Institute of Sacred Music.