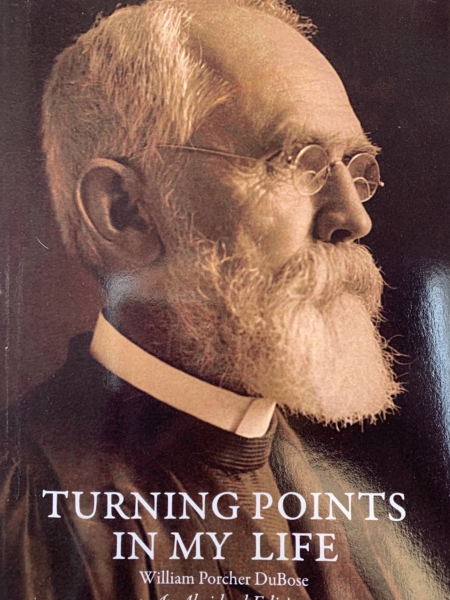 For the past 97 years, the School of Theology’s annual lectures, held in conjunction with the alumni homecoming, have carried the name “The DuBose Lectures” in commemoration of William Porcher DuBose, appointed dean of the school in 1894. To celebrate his 40th year at the University of the South, DuBose delivered four lectures and a sermon meditating on his life and theology. This series of “intimate talks” became the model for today’s lecture series.

It is no secret that DuBose’s family owned 204 slaves before the Civil War. After the war, he was often quoted as saying that even if slavery was now acknowledged as sinful, it had been beneficial to slave and owner.

“The South received and exercised slavery in good faith and without doubt or question, whatever we pronounce it now, it was not a sin at that time to those people. It was natural that we were in it and of it would be the last to see its extinction as a necessary step in the moral progress of the world. Now that the judgement is passed, we join in it. Slavery we say, is a sin, and a sin of which we could not possibly be guilty,” wrote DuBose. In his typescript memoir, DuBose praised the Ku Klux Klan as “an inspiration of genius.”

The faculty of the School of Theology has been engaged in honest and open discussions about changing the name of the lectures for some time, and on April 7, 2021, voted to remove his name from the annual event, effective immediately.

Recent DuBose Lectures have focused on racial reconciliation, and this year’s lecturers will continue in that pursuit—the Rt. Rev. Jennifer Baskerville-Burrows will present “The Language of Dismantling White Supremacy: Intentional Words for Intentional Witness,” and the Rt. Rev. Phoebe Roaf’s lecture is titled “Addressing Racial Reconciliation in Different Contexts.”

The Rev. Dr. Benjamin King, professor of Christian history and associate dean for academic affairs, is a member of the university’s Roberson Project on Slavery, Race, and Reconciliation. This six-year research project begun in 2017 has allowed for the uncovering and understanding of the university’s historical entanglements with slavery and slavery’s legacy to help it seek a more just and equitable future.

King said, “Theology always arises in a context. Even if DuBose’s theology retains an international reputation, his writings on this region and on race bear witness to his context. DuBose is not the name that best represents our context and what the School of Theology and our alumni have to offer the 21st-century Church.”