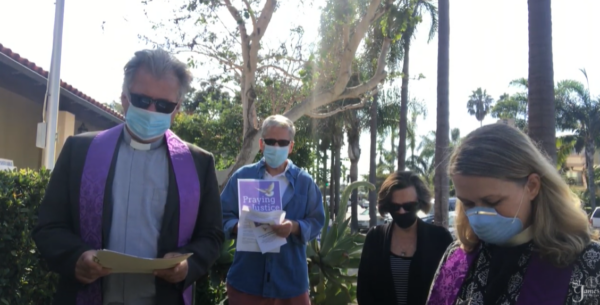 Clergy from the Episcopal Diocese of San Diego are uniting faith leaders from around the County in a public effort to pray and offer witness for election integrity, peace, and justice during the unprecedented and turbulent lead up to the presidential election. Groups are gathering every Tuesday at Noon, in front of numerous civic locations (including libraries and polling places), and will continue to publicly gather through election day, culminating in a large “Pre-Election Interfaith Prayer and Peace Vigil” in scenic Waterfront Park on Sunday, November 1. The 2:00pm event, in partnership with the San Diego Organizing Project, will prominently feature speakers and well-known faith leaders from a variety of religious traditions in San Diego County including the Rt. Rev. Susan Brown Snook, Bishop of the Episcopal Diocese of San Diego.

Their prayers focus on some of the most pressing issues of the moment, including: election integrity, racial justice, and nonviolence. “It seems we have hit a crisis moment in America, and as faith leaders, we recognize the important role that faith and prayer can play as a force for peace and justice” said the Rev. D. Rebecca Dinovo, a priest at St. James by-the-Sea Episcopal Church in La Jolla and one of the group’s organizers. Christian leaders from a wide diversity of denominations as well as members from several local Jewish and Muslim communities are participating. “We have groups praying and witnessing from all four corners of the County” Dinovo said. The diverse group of faith leaders are unified in their commitment to the power of prayer and public witness in their desire to see positive change towards peaceful and just solutions during this most challenging time for our country.