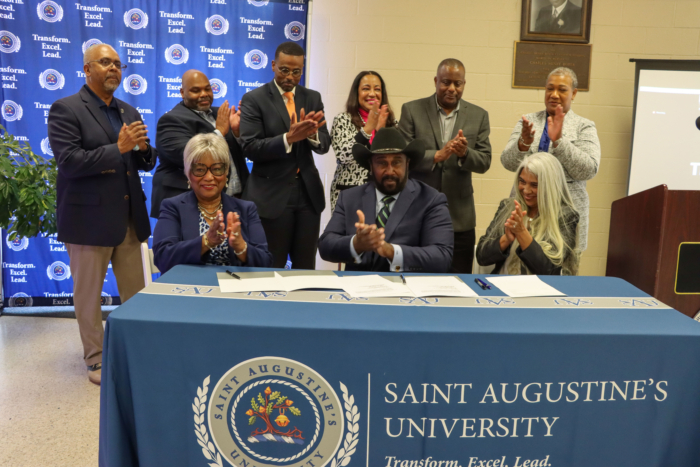 Today, the two organizations formed a strategic alliance to promote equity and civil rights in agriculture. As a result of this alliance, SAU becomes an official John Boyd Institute site. In addition, the John Boyd Institute administers advocacy efforts that advance the National Black Farmers Association. Founded in 1995 by John Wesley Boyd, Jr., NBFA is a response to significant patterns of discrimination and oppressive practices against Black, minority, and women farmers.

“Black farmers have always served as pillars of our society. They have used their hands to pound our earth throughout history to produce sustenance and stability,” said SAU President Dr. Christine Johnson McPhail. “Our alliance with the National Black Farmers Association is a tribute to this history and a declaration that Saint Augustine’s University stands with our Black farmers in their ongoing efforts to ensure equity and opportunity.”

Together, SAU and NBFA will collaborate on opportunities to advance the organization’s pillars, which include:

“Ensuring equitable practices in farming requires the support of many,” said John Wesley Boyd, Jr., founder National Black Farmers Association. “We are honored to count Saint Augustine’s University among the coalition of supporters of our continued pursuit for equity.”