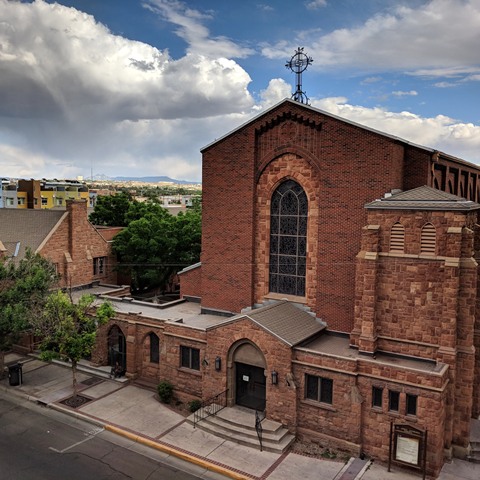 The Episcopal Cathedral of St. John received a 136th anniversary present being listed on the State of New Mexico and National Register of Historic Places.

The first church services were held in November 1882 in a small stone church at the corner of 4th and Silver with 33 parishioners attending. The church had been constructed of red Arizona sandstone and brick.

The historic designation recognizes the work of the well-known New Mexico architect John Gaw Meem. He had crafted the Cathedral House in the 1930s in a Collegiate Gothic style to house offices and classrooms. It was constructed of stone from demolished Santa Fe Railway buildings. It still has offices but now contains a gift shop and a room displaying The Saint John’s Bible, an illuminated set of seven volumes of Holy Scripture seen by visitors and members.

In the 1950s Meem was tasked with enlarging the worship space of the cathedral to accommodate a growing congregation. He kept some of the foundation stone and part of its corner tower as he took the roof to new heights and moved the back wall to the alley between Silver and Lead Avenues. He also incorporated one of the stained glass windows from the original church in the new Gothic Revival style cathedral. That cornerstone was laid on November 25, 1951 and was dedicated on November 11, 1952.

“This architectural gem in downtown Albuquerque has been a center of worship, music, art and preaching the gospel for more than a century,” said Charles Hawkins, the cathedral vestry’s senior warden or elected board chair. “We’re very proud of our history and our commitment to downtown as we move through our second century of witnessing to God’s love for all.”

The cathedral recently welcomed the Right Rev. Michael Hunn, the new Episcopal Bishop of the Diocese of the Rio Grande. At that service on November 4, he talked about the loving, liberating and life-giving message of Jesus Christ.

“We tend to build cathedrals in cities because cities know about need and want,” he said to nearly 400 worshippers. He used the gospel reading of the raising of Lazarus likening cathedrals to tombs. “Lazarus was the first to rise from the dead, but he is not the last,” he said. “And so we build cathedrals,” where resurrection can take place.

The cathedral hosts numerous community music events and houses an art gallery. At the November 10 “Concert of Psalms and Remembrance” marking the 100th anniversary of the end of World War I, Bishop Hunn said cathedrals have always been places of music, art and beauty.

St. John’s is the Cathedral of the Episcopal Diocese of the Rio Grande which comprises the 55 congregations spread throughout 154,000 square miles of New Mexico and Far West Texas. It is geographically the largest diocese in The Episcopal Church in the 48 contiguous states.