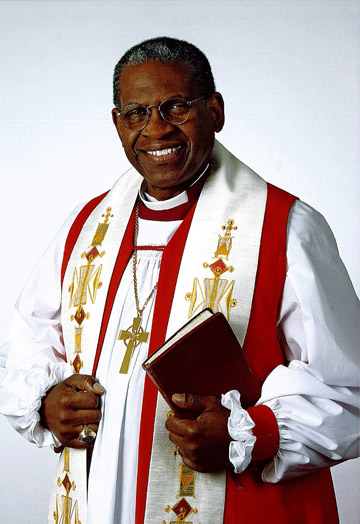 I was leading prayers at the Tree Lighting Ceremony in the Pennsylvania State Capitol when the news of President Mandela’s death came. Just before I rose for my final prayers the Governor whispered the news to me and asked me to announce it at the benediction.  I did so and there were deep audible gasps throughout the cavernous Rotunda. Children and adults alike all seemed in solemn grief, as though having lost someone or something of intimate value.

Regardless of whether we have personally met Nelson Mandela or not, his life was incarnational—an incarnation of courage, grace and justice.  His legacy embodies something special that is indeed intimate and awe-inspiring. Perhaps the awe is as John’s Gospel says of the ultimate incarnation, reaffirms the hope that “the light [does] shine in the darkness; and the darkness cannot overcome it”. There is no question we have been privileged to live in the time of a great spirit, a Madiba (patriarch of a new political age). Mandela’s early formation was as a Methodist.  Christian principles of justice, forgiveness and reconciliation clearly formed his political and social ideals during his years on Robben Island. In his autobiography, Long Walk to Freedom, Mandela tells the story of his early engagement with Christianity. “The Church was as concerned with this world as the next: I saw that virtually all of the achievements of Africans seemed to have come about through the missionary work of the Church.”  But like many African Christians, he honored the transcending spiritual values of Tribal culture.  This combination made him a very spiritual man.

My wife and I have made pilgrimages to South Africa and visited Robben Island.  I must admit that I find it mind boggling to believe one could spend decades in such conditions and be formed for grace.  Yet, a profound theological truth is that nothing is wasted in God’s economy if we surrender it to God’s grace.

The day after Mandela’s death a long-time friend, Father Kwasi Thornell, was in touch with me.  He reminded me of the long partnership of the UBE leaders and the Episcopal Church with South Africa’s struggle to end Apartheid. He referenced the Church’s decision to divest as “the strong, courageous and costly stand of the Episcopal Church and the Union of Black Episcopalians which influenced other religious bodies and institutions to follow….”

It started me to think about our Church’s significant prophetic, political and economic influence in South Africa’s struggle to end Apartheid.  Part of that memory is that our Church was a reluctant prophet in the order of Jonah. It took courageous leaders in ESCRU (Episcopal Society for Cultural and Racial Unity), the Union of Black Episcopalians, and some very bold Deputies and Bishops to unite the Church against Apartheid and advance Nelson Mandela’s freedom. It was a long hard struggle to “awaken our Church”.

I think of early Church activists such as William Overton Johnston (1921-1998) who in 1956 founded the Episcopal Churchmen for South Africa to help liberate Southern Africa from apartheid. His spiritual home was Church of the Resurrection, NYC but his ministry existed between the Episcopal Church national offices at 815 2nd Ave and the New York office of the Episcopal Church in South Africa. In the 60’s, 70’s and 80’s Johnston did the lonely work of building informed strategies for advocacy and connected hundreds of congregations to dioceses in South Africa (e.g. Transkei, Lesotho and Namibia).  It was slow and difficult work but eventually he and others persuaded the House of Deputies and the House of Bishops to take action.

In 1967, a committee of Episcopal Church officials headed by Bishop William Creighton of Washington recommended that “banks and businesses and industries that express no moral concern for the implications of their involvement in apartheid or who are not using their presence in South Africa as helpfully as the situation permits be considered inappropriate holders of the invested funds of the church.”

There were other Episcopal leaders such as Bishop Walter D. Dennis, Canon Fred Williams (who with Dr. Wyatt T. Walker of Canaan Baptist Church founded the American Committee on Africa), Dr. Deborah Hines (UBE President 82-88) and Fr. Robert Chapman. All were engaged UBE leaders and its predecessor organization.  Father Chapman, Staffer with National Council of Churches, challenged ECUSA Executive Committee’s view that there was not enough Episcopal Church investment to take divestment action. He “prophesied” that a limited degree of involvement in sin is to be condemned when it is conscious and deliberate, premeditated and calculated. “The Church, therefore, is compromising her Christ.”

One of the most poignant roles of the Union was at the 1988 Detroit General Convention.  Earlier the Episcopal Church had divested its interest in Shell and other major corporate interests in South Africa.  Responding to a call by Bishop Desmond Tutu, members of the Union, led by President Dr. Deborah Hines, worked through the night drafting the manifesto which led to Resolution B052.  This Resolution called for our Church to “encouraging the membership to participate in the boycott; and that we call for the expanding of this boycott to include all international oil companies doing business in South Africa….”  Bishop Tutu and the South African Church expressed great appreciation for this significant effort towards ending Apartheid on the part of individual Episcopalians, the Church and other American Christians.

Another relationship which contributed significantly to ending Apartheid and freeing Mandela was that of Bishop John Walker and a little known South African diocesan bishop, Desmond Tutu.  Together they led protested, were arrested in prominent places like the South African Embassy, raised funds and encouraged the Free South Africa Movement.  They publically challenged the Reagan administration’s South Africa policy, which was advocating “friendly persuasion” over economic divestment.  Unquestionably, Bishop Walker’s significant influence in the political and social circles of Washington, the House of Bishops, the Anglican Communion and the pulpit of the National Cathedral contributed to the moral conversion of America and the Episcopal Church.

Today, Archbishop Tutu and President Mandela are twin icons: one political, the other a religious icon.  The Archbishop has famously said of Mandela, “….suffering can do one of two things to a person. It can make you bitter and hard and really resentful of things. Or as it seems to do with very many people–it is like fires of adversity that toughen someone. They make you strong but paradoxically also they make you compassionate, and gentle. I think that that is what happened to him.”

I feel blessed to have lived in an age of an epic miracle, the “Exodus” from Apartheid to Free Democratic South Africa; and to have witnessed its Moses—its Madiba.  The Episcopal Church, the Nation and the world have been deeply touched by Mandela.  But there is a challenge which his legacy leaves us to remember and carry forward.  This challenge is well expressed by the Bishop of Michigan, Wendell Gibbs.  He writes:

The Rt. Rev. Nathan D. Baxter, bishop of Central Pennsylvania, is also honorary chair of the Union of Black Episcopalians.