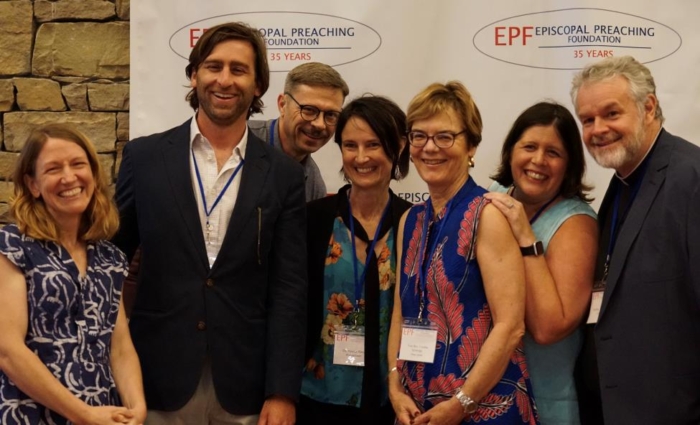 Seminary of the Southwest group at the 35th Celebration of PEP

From across the United States and Canada, 46 seminarians, representing 13 seminaries and local formation programs, made their way to the Annual PEP Conference of The Episcopal Preaching Foundation (EPF), gathering in person for the first time since 2019.  For some it was an easy drive; for others it was a nightmare with cancelled flights and lost luggage, as well as an overnight sleep in an airport lounge – all due to a major glitch in the national air control system.  Upon their arrival, they were welcomed by their faculty and the hospitality of the Roslyn Conference Center in Richmond, VA. This year PEP was held May 30-June 3.

PEP is the Preaching Excellence Program founded 35 years ago by A. Gary Shilling, a layperson, who envisioned a weeklong conference for seminarians, between their second and senior year at seminary, as well as those in local formation programs.

With bags unpacked, the seminarians gathered for a brief welcome and introduction by Dean of Faculty, the Rev. Dr. Stephen Smith, and then adjourned to a BBQ, where they met informally with their faculty and colleagues with whom they would journey for the coming week. 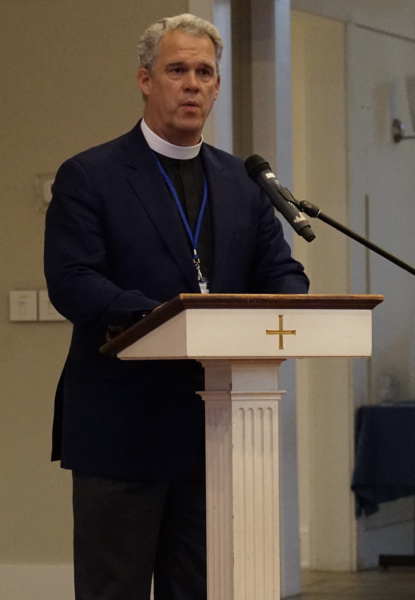 Most days began with worship followed by a Plenary Presentation.  Dean Cynthia Briggs Kittredge of The Seminary of the Southwest was the first Keynoter, taking as her theme “Preaching the Gospel in Polarized Times.”   Keynoter Micah T.J. Jackson, President of Bexley/Seabury, followed the next day and addressed “The “I” in Preaching.”  Christine Parton Burkett, preaching coach and consulting faculty at Duke Divinity School, explored “The Word Embodied, Preaching As an Act of Incarnation.”  One afternoon, Randy Hollerith, Dean Washington National Cathedral, addressed the assembly on “Navigating the Social, Political, and Spiritual Landscape of Contemporary Preaching.”

With the Keynote plenary headlining the day, participants then gathered in small preaching groups lasting 90 minutes, each with a faculty member as moderator.  The small preaching group is one of the most productive tools to have evolved at PEP. A group of between 4 and 6 meet twice daily to preach to feedback from their peers.  This critique is affirmative, kind, constructive, and honest.  The process includes message, delivery, and style.  At the end of the peer critique, the faculty moderator summarizes the responses and adds an assessment with an emphasis on appreciative critique.  The small group allows time for quality dialogue but also builds an invaluable element of networking beyond the conference.  One participant opined, “I’m renewed in my new identity as a preacher, who would have thought?!”

Along with the plenary sessions and the small preaching groups, the faculty offer workshops each day, many touching on many aspects of preaching.  Among the workshops were:  Four Funerals and a Wedding; Instant Preaching (when the preacher is asked to “say a few words: Preaching Across the Divide (engaging parishioners no matter what cultural, income, or political beliefs); and, Preaching Prophetic Witness.

The Rev. Dr. Nandra Perry, Director of the Iona Collaborative, hosted a workshop to discuss “Our Evolving Church:  Local Formation and the Futures of Theological Education.”  She introduced to the assembled The Iona Collaborative at Seminary of the Southwest. The Collaborative provides graduate-level video curricula and Zoom-based continuing education to postulants in 32 dioceses. With over 450 hours of video curriculum (including extensive preaching content from the Episcopal Preaching Foundation), the course catalog is highly adaptable to local educational needs.

The PEP Class of 2022 assembled on the 35th anniversary of EPF.  To observe that milestone, an evening of celebration. The PEP participants joined the EPF Board of Trustees, PEP Alums, and invited guests to honor EPF founder A. Gary Shilling, as well as past board members, donors, and faculty who contributed their expertise, talents, and generosity.  Over its 35 years, EPF has nurtured over 1,800 seminarians, including 2 Presiding Bishops, as well as thousands of post-ordination diocesan clergy.  Bishop Susan Ellyn Goff, Bishop Suffragan and Ecclesiastical Authority of the Diocese of Virginia, welcomed the guests and shared a moving blessing for The Foundation.  Dean Randy Hollerith was the evening’s moderator.

The week seemed to rush by with plenary sessions, small preaching groups, affinity group meetings, workshops, and daily worship.  So, on Friday morning, after worship, and the 7th meeting of the preaching groups, the participants gathered to receive their Certificate of Participation in the Bishop’s Chapel.  With final words and a blessing from Dean of Faculty Nikki Mathis, the PEP Class of 2022 departed to join their predecessors as energized preachers and Alums.