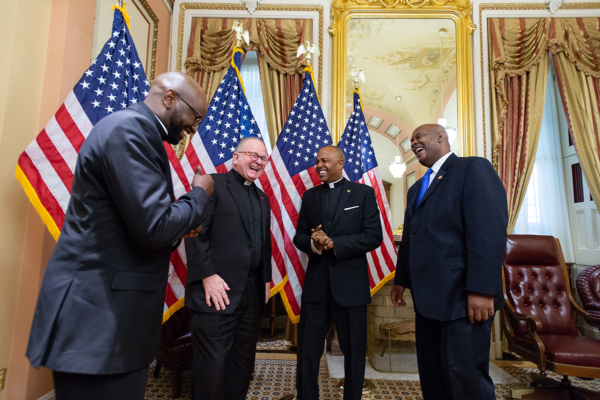 Congressman Dwight Evans (PA-03) today hosted the rector of a historic West Philadelphia church as guest chaplain to the U.S. House of Representatives.

Evans said, “It’s my great honor to welcome today’s guest chaplain, who is from my district. Father Martini Shaw is rector of the Historic African Episcopal Church of St. Thomas in Philadelphia. The church was founded in 1792 as the first black church in the Episcopal Church in the United States. It is also the oldest African American church in Philadelphia. Father Shaw now proudly serves as a successor to the Reverend Absalom Jones, the first black priest of the Episcopal Church, and first rector of St. Thomas Church.

“I have known Father Shaw for many, many years. More recently I have had the pleasure of working closely with him in the Together for West Philadelphia initiative, which recently celebrated its first year of working to improve health and reduce poverty for the residents of West Philadelphia. That is just one example from his long record of working for social justice. I know Father Shaw has previously lived in Detroit and Chicago, but I’m glad he has chosen to live where America began, in the City of Brotherly Love and Sisterly Affection.”

Rev. Shaw was accompanied by the Rev. Fr. Samuel Kirabi Ndung’u, assistant rector of the church.