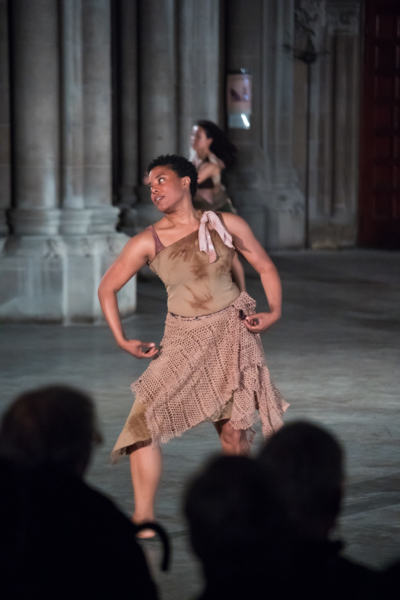 Partners for Sacred Places and Philadelphia Contemporary, in partnership with Danspace Project (NYC), are pleased to announce “Grounds that Shout! (and others merely shaking),” a series of performances and talks exploring connections between faith, movement, race, and the body, with a focus on the African American religious experience. Curated by the award-winning choreographer Reggie Wilson and featuring Wilson’s Fist and Heel Performance Group and a collection of local Philadelphia artists, “Grounds that Shout!” took audiences to four historic churches, exploring these themes within the specific context of Philadelphia’s sacred spaces.

The series began with “… they stood shaking while others began to shout,” which was performed by Reggie Wilson and his Fist and Heel Performance Group on May 2nd , 3rd and 4th, along with performances by Germaine Ingram and David Brick. Wilson’s critically acclaimed “…they stood shaking while others began to shout,” first performed at New York City’s St. Mark’s Church in-the-Bowery, home of Danspace Project, was informed by his research of the Black Shakers, including religious leader and activist Mother Rebecca Cox Jackson. This new iteration of the work was developed in response to the history of movement-building at Church of the Advocate , following a two-week residency at the local landmark.

On May 11th, “Grounds that Shout! (and others merely shaking)” culminated at three historic churches across Society Hill with a series of original performances by Lela Aisha Jones | FlyGround, <fidget>, Meg Foley, Almanac Dance Circus Theatre, and Tania Isaac, with accompaniment from members of the church congregations. Attendees moved from one site-specific performance to the next in a procession through St. Peter’s Episcopal Church, Old Pine Street Presbyterian Church, and Mother Bethel AME, encountering both the broad narrative history of these spaces and their present-day status in a rapidly changing city. This cycle of performances was staged three times over the course of the day. “Grounds that Shout!” is an extension of Wilson’s recent work with New York’s Danspace Project, interrogating the history of St. Mark’s Church in-the-Bowery in Manhattan. Danspace’s Judy Hussie-Taylor served as a curatorial advisor to Wilson as he brought these concepts to Philadelphia.

Generous support for “Grounds that Shout! (and others merely shaking)” has been provided to Partners for Sacred Spaces by The Pew Center for Arts & Heritage.

About Partners for Sacred Places:
Partners for Sacred Places is the only national, non-sectarian, nonprofit organization focused on building the capacity of historic sacred places to better serve their communities as anchor institutions, nurturing transformation, and shaping vibrant, creative communities. Headquartered in Philadelphia, Partners has built a national movement over the past 30 years based on its ability to assess issues, map assets, find solutions, and create optimism and hope for the future of our historic, purpose-built sacred places. Partners’ Arts in Sacred Places program brings together artists who need space with congregations who have space and are willing to share it with artists.

About Danspace Project (NYC):
Danspace Project presents new work in dance, supports a diverse range of choreographers in developing their work, encourages experimentation, and connects artists to audiences. For over 40 years, Danspace Project has supported a vital community of contemporary dance artists in an environment unlike any other in the United States. Located in the historic St. Mark’s Church in-the-Bowery, Danspace shares its facility with the Church, The Poetry Project, and New York Theatre Ballet. Danspace Project’s Commissioning Initiative has commissioned over 570 new works since its inception in 1994. Grounds that Shout (And Others Merely Shaking) extends Wilson’s recent work interrogating the history of St. Mark’s Church.