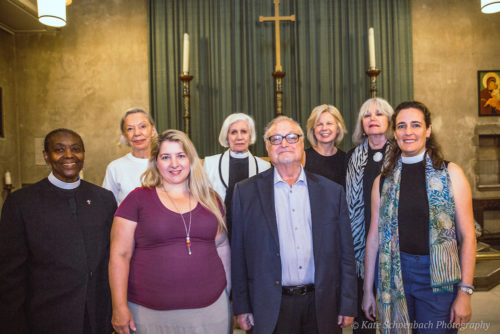 [J.C. Flowers Foundation/Circles of Support] On Saturday, August 12, the Church of the Epiphany in New York City affirmed its commitment to criminal justice reform and celebrated the graduation of ten participants from the Raising My Voice – Kin program, a leadership and public speaking skills training for individuals whose loved ones are currently or have previously been incarcerated. Circles of Support, a Harlem-based reentry partnership founded by Episcopal churches in New York City and the Interfaith Center of New York in conjunction with the J.C. Flowers Foundation, helped facilitate the training and graduation.

For five weeks the Church of the Epiphany has hosted program participants every Saturday, offering childcare and a hot meal to accompany the Raising My Voice – Kin workshop. Church members served as volunteer coaches for participants as they honed their descriptions of mass incarceration’s impact on their own families, in the hopes they may go on to speak in churches, colleges, and NGOs and share their unique stories to advocate for change.

Deacon Anne Auchincloss and Carron Donohue of the Church of the Epiphany helped bring the program to the parish after a period of consultation with the Church of Heavenly Rest. The Church of Heavenly Rest has previously hosted Raising My Voice, a similar but more intensive program for formerly incarcerated individuals. In partnership with Linda Steele and Circles of Support, Deacon Auchincloss and Ms. Donohue initiated Raising My Voice – Kin, a new program with a specific focus on the families of incarcerated men and women.

Following the invocation by Reverend Jennifer Reddall and remarks by Deacon Jacqueline Sanchez-Shabazz, Linda Steele, Program Coordinator at Circles of Support, formally introduced the program and its graduates. Asking volunteer coaches to stand and be recognized, Ms. Steele thanked them for their essential role in making the program possible and praised their work, noting that “Epiphany volunteers brought the embodiment of their church – Family – to each training.”

Church volunteers spoke to their enthusiasm for a continued partnership with Circles of Support and the Raising My Voice – Kin program. As Deacon Sanchez-Shabazz noted, “I have been looking for an outside ministry, and connection, love, and strength. Working with these courageous families has helped me to find it.”

About Circles of Support:
Circles of Support is a Harlem-based re-entry partnership that use proven practices, family involvement and a “ministry of presence” approach to support individuals returning home from prison and their loved ones. Its primary programs are Raising My Voice and Raising My Voice – Kin, public speaking trainings, and Talk to Me, a weekly support group for women with currently or formerly incarcerated loved ones. Episcopal churches in Harlem and Manhattan, including the Church of Heavenly Rest, the Interfaith Center of New York, and the J.C. Flowers Foundation are founding partners of Circles of Support. Other partners include, the Harlem Community Justice Center, and Network in the Community.
www.circlesofsupport.org