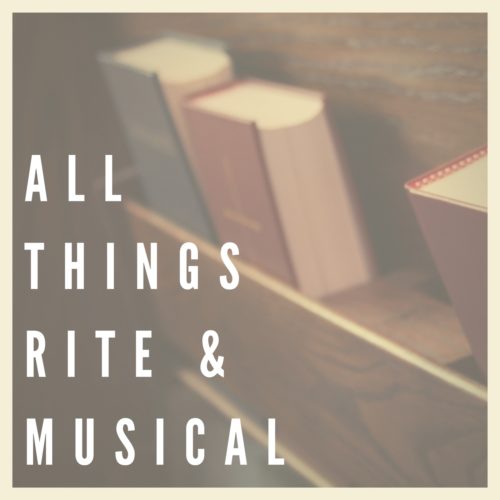 [St. Peter’s Episcopal Church, St. Louis] A priest and an organist have launched a podcast exploring liturgy and music from an Episcopal perspective called All Things Rite & Musical.

You can listen to the podcast at riteandmusical.org and through iTunes, Stitcher, and Google Play. Podcast episodes are also available for download.

Since its August 1 premiere, All Things Rite & Musical has released episodes about Baptism and liturgically East-facing altars.

“We want to have a conversation not just with each other, but with the whole church,” says Lasch. “We’re hoping the podcast will lead to a wider conversation about what congregations are actually doing with liturgy and music and why they are doing it that way.”

Forthcoming episodes will discuss the ordinary parts of the Holy Eucharist (Kyrie, Gloria, etc.), the 500th anniversary of the Protestant Reformation, and the Feasts of All Saints and All Souls.

“No subject is off limits,” explains Sinden. “Like the title says, it really is supposed to be about all things liturgical and musical.”

The latest episode, released today, asks listeners if they know any Episcopal parishes that regularly give announcements after the Nicene Creed (an option on page 407 of the Book of Common Prayer).

Lasch and Sinden plan to release new episodes of the podcast about once every two weeks.

All Things Rite & Musical will also occasionally include interviews with liturgical leaders in the Episcopal Church. An episode released last week is a conversation with Stephen Buzard, the Organist/Choirmaster at St. James Cathedral, Chicago. Forthcoming “special edition” episodes will include conversations with the Rev. Charles Dupree, the rector of Trinity, Bloomington, Ind., and Brad Hughley, the Organist and Director of Music at St. Paul’s, Indianapolis.

The hosts of the podcast are both on the staff of St. Peter’s Episcopal Church, St. Louis, Mo.; the Rev. Ian Lasch is the Associate Rector for Formation and Fellowship; David Sinden is the Organist and Director of Music.