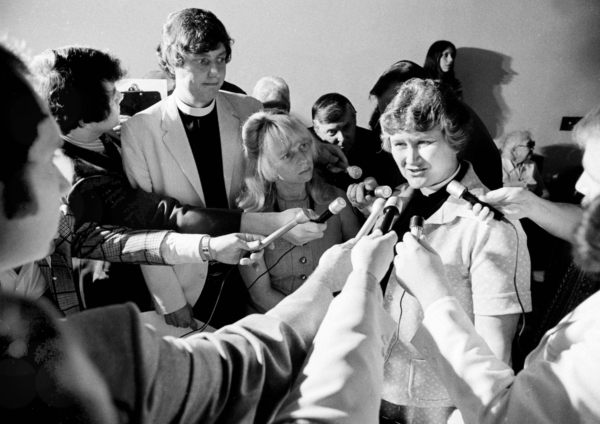 After two consecutive General Conventions voted down proposals for women to be ordained as priests, a group of women decided they could not wait any longer. They organized their own service. On July 29, 1974, at the Church of the Advocate in Philadelphia, eleven women were ordained Episcopal priests against church rules. They hit a chord, in a deeply divided world, by questioning who speaks the word of God. The media caught on, and the women priests were in the headlines for almost two years.

The Philadelphia Eleven is a feature documentary film project in production that will tell the story of these women priests. “This is the year to move this project forward,” says Director Margo Guernsey. “The patriarchy is flexing its muscles again. It is a perfect time to learn from the leaders of our past.”

In the public limelight, each woman had to decide how to live out her priesthood. For some, who preferred a more spiritual journey, the attention was unwelcome. Others found opportunities to lead. Through personal stories, and archive footage, this documentary film will tell the story of the eleven women ordained priests in Philadelphia in 1974, and the four who were ordained priests in Washington DC the following year, in their words.

It wasn’t until the 1976 General Convention that canonical changes authorized the ordination of women as priests in the Episcopal Church.

For Guernsey, it’s about the deeper meaning. “The women showed us what it means to be whole. How do we pursue our vocations regardless of whether society is ready?”

Since 2015, Guernsey and her colleague Nikki Bramley have taken ten trips around the country, and filmed 12 interviews. They have held phone conversations with an additional seven people who were intimately involved, and begun sourcing archival footage. Grants from MassHumanities, the LEF Moving Image Fund and the Episcopal Women’s History Project have supported this work. There is so much more to film, and many more archives to go through. With your help, they can bring this film to life.

Visit Kickstarter to read more about the film, and watch a video sample.

This film is produced by Time Travel Productions LLC, an independent documentary film company based outside Boston, MA. Visit TimeTravelProductions.com for more information.

About the filmmaking team:

Margo’s first feature documentary film, Councilwoman, is touring the country, and will air on PBS’s America ReFramed in September 2019. Over the past 22 years, Margo has worked as a union organizer, non-profit development director, Spanish/English translator and media instructor, always building multi-racial collaborations across class lines to inform the work of building a more just society. Margo brings her organizing, fundraising and filmmaking background to work on film outreach and impact. She holds an MFA in Film (University of Miami), MA in History (Umass/Amherst), BA in History (Brown University), and is a Tribeca/Camden/CNNFilms Retreat Alumni.

Nikki is a director of photography based in Boston. Her work ranges from independent documentaries to high-end commercial projects. Recent broadcast credits include: Councilwoman (America Re-Framed, 2019), Breaking Big (PBS 2018), Seeing Eyes/Feeling Heart (American Masters 2018), NOVA “Addiction” (2018), NOVA “Prediction by the Numbers” (2017), Frontline (2017, 2015). Her documentary and nonprofit cinematography work has taken her across the U.S., and to Thailand, Ireland and South Sudan. Nikki graduated from the S.I. Newhouse School of Communications at Syracuse University in 2002 with a BS in Television, Radio and Film Production.