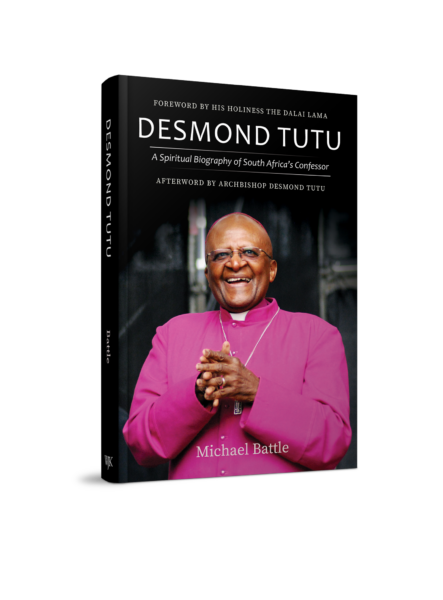 Nobel Peace Prize-winning South African Anglican bishop Desmond Tutu, renowned for his anti-apartheid activism, is a Christian mystic and saint, says Michael Battle in his new book, Desmond Tutu: A Spiritual Biography of South Africa’s Confessor (WJK Books, March 16, 2021). Battle, director of the Desmond Tutu Center in New York, has known Archbishop Tutu for more than 25 years, and has seen up close the deep spirituality that helped Tutu dismantle apartheid. It is rooted in ancient Christian practice, and in the African concept of Ubuntu, human interdependence. The first biography of its kind about Desmond Tutu, the book examines how Tutu’s Christian mysticism shaped his commitment to restorative justice and reconciliation.

“Tutu’s life and work are crucial for both the wellbeing of the world and the survival of the church that seem equally bent toward crisis and culture wars,” Battle says. Tutu’s fight against apartheid was a spiritual battle, one with lessons for resisting the growth of Christian Nationalism today. “Getting the oppressor to see God in common with the oppressed was Tutu’s greatest contribution,” Battle writes. “For the oppressor to confess that their god was ultimately diminished in the religion of apartheid is a miracle that we all need to replicate.”

Understanding Tutu as a Christian mystic is essential to understanding his accomplishments. “The aim of the mystic’s life is to achieve union with God,” Battle explains. The way that Tutu tried to reach this goal animated his political life. He explores Tutu’s life through the three stages of ancient Christian mysticism:

“Tutu’s worldview of Christian mysticism counteracts the system of apartheid. His Ubuntu theology incorporates the African Bantu perspective of personhood with a mystical image of God’s diversity in unity. In short, Ubuntu means humans beings need each other in order to be human. This interdependence is just as true in the divine life of God,” Battle writes.

Tutu’s unique combination of faith and political leadership led Battle to coin the phrase “political spirituality.” Tutu’s understanding of how spirituality leads to politics developed from the Ubuntu sense of community and interdependence. As Tutu said: “Politics and religion speak of life and all life belongs to God who is Lord of all life. Love of God and love of neighbor are two sides of the same coin, how can you say you love God whom you have not seen, when you hate your sister and brother whom you have.”

Battle has observed Tutu’s spiritual life since 1993, serving as his chaplain, praying, driving, and even jogging with him. He witnessed firsthand his asceticism and the centrality of contemplative prayer, meditation, and the sacraments in Tutu’s life, providing him with energy and creativity to face monumental tasks. Examining Tutu’s mystical spirituality and saintliness offers a mirror for the rest of us. Through Tutu’s spiritual life, “we see what often goes neglected in our own lives, because the spirit life is hard to see,” Battle says. “The work of reconciliation is hard to perceive, especially if one does not know something needs to be reconciled.” Battle, whose work as a theologian has focused on how Black identity and Christianity help us better see practices of peacemaking and reconciliation, offers Tutu as an exemplary of someone who brings Black and Christian identity together.

Tutu, who can no longer travel due to health issues, continues to wield spiritual, moral, and political influence, speaking truth to power along with other wise elders such as his close friend the Dalai Lama. After all, “How can Tutu retire from God?,” Battle asks.

In fact in the afterword, Tutu writes: “When I am no longer on this planet in the physical form, I pray that I would have made a contribution in forming both a more mature consciousness and conscience for those who say they believe in God. We cannot say that we believe in God if we hate each other —much less say we love God and do the same….God is love. Spiritually, there is not much more to say than this.”

The book is available to order here.

Michael Battle is Herbert Thompson Professor of Church and Society and Director of the Desmond Tutu Center at General Theological Seminary in New York, and President and CEO of the PeaceBattle Institute. The author of eleven books, including Reconciliation: The Ubuntu Theology of Desmond Tutu, he focuses his ministry on nonviolence, Christian reconciliation, human spirituality, and Ubuntu (the African worldview of community). Battle lived in residence with Archbishop Desmond Tutu in South Africa for two years and was ordained a priest in South Africa by Tutu in 1993. In 2010, he was given one of the highest Anglican Church distinctions as “Six Preacher.”