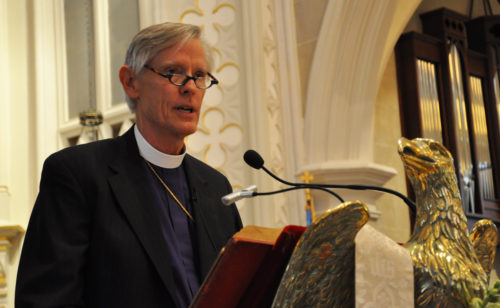 First of all, on behalf of the diocese gathered here, I want to express heart-felt thanks to our Presiding Bishop. For your presence with us, for your gracious leadership, and for your support of us in South Carolina, we give thanks to you and to God. Thank you, so very much!

In addition, I want to thank those who have worked so hard in preparation for this day. The Steering Committee for the Reorganization of this diocese – convened by Tom Tisdale and chaired by Hillery Douglas – have done great work. I am very grateful also to the clergy, the staff, and parishioners of Grace Episcopal Church, who have labored tirelessly over details in order to provide us with a wonderful setting for this convention.

And, I want to pay special recognition to those faithful Episcopalians – clergy and laity -throughout the diocese, who have struggled and persevered to claim their heritage, often in unlikely and less-than-ideal circumstances.  Job well done! As we all know, there is much more work to do.

Also, I want to express my thanks to the delegates of this convention, for the honor and the trust you have given me. As I have said in public interviews recently, The Episcopal Church has been my home and Episcopalians have been my spiritual family for all of my life. Therefore, I feel a dual sense of gratitude and of responsibility as I accept the honor and the trust that you convey to me this day. We have quite a task ahead of us – but with the support of each other and by the grace of God, we will be successful. May God grant us the wisdom, the perseverance, and the grace necessary to accomplish His will in this diocese and at this time.

Last, but certainly not least, I want to say a special thank you to my partner in life and in ministry, Annie vonRosenberg.

Some of you may have heard previously of a comment I made to Annie prior to our move to South Carolina. It seems appropriate to mention it again here. As we were packing to leave East Tennessee a year and a half ago, I said, “All of the moves we’ve made in our married life have been because of the church. But this move will be in spite of the church!” That comment seems at least ironic in the present moment – and perhaps even prophetic, in a strange and contradictory kind of way.

In any event, here we are – a group of people committed to The Episcopal Church – some, sadly displaced from their spiritual homes; others, ﬁnding new life in exciting times; and a bishop who thought he had retired. Indeed, here we are – facing an uncertain future; relying on others for strength and support; and depending on God’s grace in the tomorrows that await. It sounds almost like New Testament Christianity, doesn’t it?

In my remarks today, I want to use the image of rebuilding, for that is what we are called to do – to reorganize and to rebuild The Episcopal Church in South Carolina. I have several building blocks to suggest to you. There are and will be others, certainly. This is not an exhaustive list, but it mentions a few, at least. However, before considering building blocks, we need ﬁrst to think about the foundation on which we are to build.

St. Paul wrote to the people of the church in Corinth, “No one can lay any foundation other than the one that has been laid; that foundation is Jesus Christ” (I Cor 3:11). And those words of St. Paul we must remember in our day and in this diocese. Jesus Christ is our foundation. On that ﬁrm foundation we must rebuild. In particular, two Christly virtues for our foundation in South Carolina are these: humility and love.

The history of the church, though, contains a record of many others who share in this failure. We are not unique in our current circumstances. The apostles split before Jesus died. And such splitting has continued throughout history. The existence of denominations testiﬁes to the failure of our efforts on behalf of Christian unity. And the current situation in South Carolina is further evidence of the same. Therefore, Christian humility needs to have a place in the foundation on which we are rebuilding. There is no place for self righteousness here … but there is much room for humility. May we, therefore, claim the Christian virtue of humility as an important part of our foundation.

In addition, as followers of Jesus, we need to recognize that other sincere Christians – former Episcopalians – have chosen a different path from ours. Theirs is a path committed to faith in Jesus, as they understand that faith. Thus, our intentions, in many ways, mirror each other, even though our paths diverge at this point in history.

Therefore, it is appropriate to pray for one another and to wish each other well on our separate ways. While we have failed thus far in our efforts toward Christian unity, our Lord will ultimately succeed, on his day. When that day comes, I want to greet fellow Christians as friends, not as enemies. Thus, in the meantime – before our Lord’s return – the appropriate attitude toward fellow Christians on a different path is love. May love, therefore, provide another essential ingredient in the foundation on which we build.

Now, let me turn our attention to several building blocks, to place on the foundation of humility and love. As I mentioned earlier, this is not an exhaustive list, but these at least will give us cornerstones for the work to come.

Thirdly, as we rebuild this diocese, we also will reclaim classic Anglican, Episcopal theology. This cornerstone offers access to a rich heritage, which we need so very much. For instance, sources of authority – from the beginnings of Anglicanism – have included scripture, tradition, and reason. Protestant denominations who hold only to scripture as authoritative have offered great gifts to the world … but that is not who we are, as classical Anglicans, representing the Anglican Communion in this part of the world. Therefore, in addition to holy scripture, the traditions of the church through history and our God-given reason also possess authority for us. We give thanks for such classic Anglican, Episcopal theology, which we will reclaim, even as we rebuild this diocese.

A fourth and ﬁnal cornerstone may be most important of all – and that is an emphasis on mission. The Episcopal Church actually has another legal name – “The Domestic and Foreign Missionary Society.” Therefore, this cornerstone identiﬁes who we really are. In this time of rebuilding for us in South Carolina, the temptation will be great to focus too much attention on ourselves. But, ironically, an excess of such attention would be over against our very identity. It was Archbishop William Temple who wrote, “The church is the only society on earth that exists for the beneﬁt of non-members.” May we, therefore, with thanksgiving, embrace our identity in this cornerstone of mission.

By way of conclusion, then, we have a lot of work to do in the task of rebuilding The Episcopal Church in South Carolina. However, we have resources – both within this diocese and beyond it – to help us in the tasks ahead. I have suggested a couple of ingredients in a secure foundation on which we may build. And, I have offered four building blocks – cornerstones on which to build.

Let me close now with words from St. Paul, written to his beloved faith community in Ephesus. As your bishop, my own hope and prayer for you echo this petition of St. Paul:

“I pray that the God of our Lord Jesus Christ, the Father of glory, may give you a spirit of wisdom and revelation as you come to know him, so that, with the eyes of your heart enlightened, you may know what is the hope to which he has called you, what are the riches of his glorious inheritance among the saints, and what is the immeasurable greatness of his power for us who believe.” (1:17-19a).