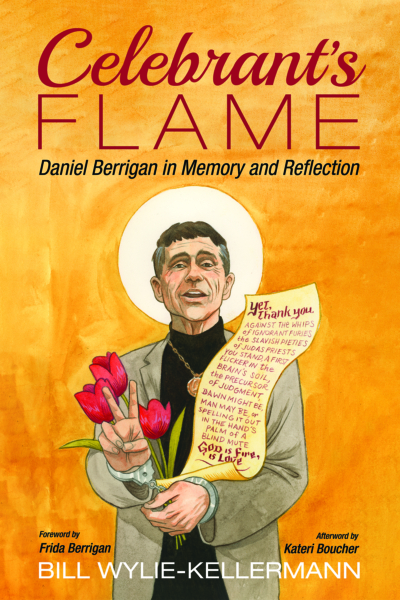 Bill Wylie-Kellermann, now retired after ten years at St. Peter’s Episcopal-Detroit, has written Celebrant’s Flame: Daniel Berrigan in Memory and Reflection (Cascade, 2021). His seventh book, it was published to mark the 100th birth anniversary of the Jesuit poet and prophet of gospel nonviolence.

Wylie-Kellermann fell under the mentorship of Berrigan fifty years ago when he was a student at Union Theological Seminary (NYC) and the anti-war priest had just emerged from federal prison for a liturgical act of burning 1A draft files in Catonsville, Md in 1968. William Stringfellow called that action a “politically informed exorcism.” There is a full chapter and more dedicated to Berrigan’s friendship with Stringfellow, the active Episcopal layperson and public theologian who often wrote for The Witness magazine. (A contribution of Dan’s to the magazine is also included in the volume).

Previously, Wylie-Kellermann was appointed for eleven years to teach Principalities, Urban Nonviolence, and Scripture at Whitaker School of Theology of the Diocese of Michigan.

Of Celebrant’s Flame, Walter Brueggemann has written: “In these relentlessly compelling pages, Dan Berrigan keeps coming at us. We get Dan’s wisdom, courage, passion, honesty, good humor, faith, joy, and eloquent gracefulness. And besides all of that, we get the imagery and testimony of his wide circle of friends who shared his passionate vocation of justice. We get all of this because of the generous gifts of Bill Wylie-Kellermann, gifts of poetic cadence, good memory, strong imagination, a close friendship with Dan, and a passion for justice not unlike that of Berrigan himself. This deeply moving book consists in poems, memories, sermons, speeches, and testimonies that will keep Dan’s singular legacy alive for time to come. The book is a welcome gift to us. It is indeed relentlessly compelling in ways that will both unnerve and give nerve to an attentive reader.”