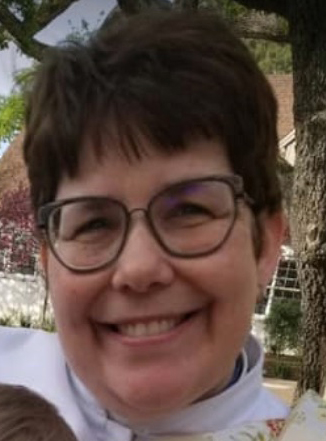 They minister to the homeless. They distribute food to people who cannot afford to adequately feed their households. They provide supportive services for the mentally ill. They work as chaplains in hospitals. They also serve at the altar, proclaim the Gospel and preach sermons in church.

They provide a bridge between the church and the needs of the world.

They are deacons, one of the best-kept secrets of the Diocese of California, which encompasses San Francisco and much of the surrounding Bay Area. Presiding Bishop Michael Curry recently called the diaconate a “sacred and core ministry of the Episcopal Church.”

The Venerable Hailey McKeefry Delmas has a keener insight than most people into what it means to serve in this ministry. A resident of Belmont, she was ordained as a deacon in 1999 and has served several parishes around the Diocese. She also served as a chaplain at Stanford Hospital and Clinics, was the first deacon to chair the Commission on Ministry, and has served as administrator of the School for Deacons for the past two years.

And to emphasize his recognition of the breadth of her knowledge and experience, Bishop Marc Andrus recently appointed Hailey as Archdeacon for the Diocese. She serves as one of two Archdeacons, along with the Ven. Nina Pickerell.

How on earth did she end up doing this?

“When I was in high school, I felt a call,” she said. Mary Lou Taylor, who was a graduate of the School for Deacons in the Diocese of California, led a convalescent home ministry. Hailey went along with Mary Lou once to visit some patients in a nursing home, and Hailey’s path was set. “She gave me a list of patients and said, ‘These are your people.’ And from that day on, I felt a responsibility for my people.”

Hailey later married and moved to New York, where she again found herself active in parish work. “One of the priests there knew that I was trying to discern whether I should study for the ministry. He told me, ‘You can run but you cannot hide from God if you are being called.’ So I entered a program and came to the realization that my heart just was not into becoming a priest and running a church, but I was very interested in working directly with people.”

She returned to the Bay Area six months after being ordained in the Diocese of Long Island.  She was placed at Church of the Epiphany in San Carlos. Three years ago she began splitting her time between Epiphany and Church of the Transfiguration in San Mateo, facilitating a growing collaboration between the two congregations.

So what exactly does a deacon do? Most worshipers in the Diocese probably have little or no exposure to deacons other than seeing them assist at the altar when the Bishop makes a visitation. They prepare the wafers for communion, proclaim the Gospel before the sermon, and give a shouted Hallelujah at the end of the service. But what else?

“I’ve always thought that every baptized Christian, in response to their faith, needs to find a place to use the gifts they have been given,” Hailey said. “My job as a deacon is to get to know people and what’s going on in the world around them, and point them in the direction where they can do the things they promised in their baptismal vows.”

She said there has been a renewal in the mission of the diaconate in the past 30 years. “Deacons are almost like translators. The church often does not speak in worldly terms, and the world in turn does not speak in churchy terms.” Deacons act as the bridge.

No single job description could ever illustrate the work they do. “We are like part-time secret agents out to change the world. But every deacon does it differently, and that’s why there’s so much confusion. You’ll find deacons helping the elderly, helping the homeless, advocating for change through various organizations… there are as many ministries as there are deacons. Deacons are the reminder that what we all believe has to be translated to how we all act in the world.”

Hailey and fellow Archdeacon Nina hold Zoom meetings with the rest of the deacons every two weeks. “We have 65 deacons residing in the Diocese, including those who are retired. Of those 65, 40 are working deacons while the rest are retired but often still actively helping.”

One leads worship and a feeding program called Open Cathedral in the San Francisco Civic Center every Sunday; another is a military chaplain; one provides ministry at San Quentin; some serve as hospital chaplains; another works with the Braid Ministry for youth; some help administer food pantries or housing for the poor.

There has been a complaint in years past that, because most deacons receive little or no pay, only the wealthy can afford to pursue the ministry.

“It used to be an elite ministry, skewed toward older, retired people who were well-off enough to have the time,” Hailey agreed. “But that has changed. When I was ordained in 1999, most deacons were more than 60 years old. But we have many younger people now, and they are very good at letting us know what’s needed in the world outside the church.”

Hailey sees her role as administrator at the School for Deacons as an extension of her ministry. “It (the curriculum at the school) provides an opportunity for postulants to get exposed to and involved with many types of ministry, and then we push them out the door. We equip people to recognize the gifts that God has given them and to decide how they want to use them.”

If a member of the church seems to be hearing a call to ministry, what should she or he do? Speak to your priest, Hailey suggests. If, after discussion, the idea still feels right, there is a process for discernment. The Holy Spirit will lead the way. But if one would like to first talk it over with Hailey, she can be reached at hailey@cyberdeacon.com or http://scatteredrevelations.com/. The website for the School for Deacons is at https://schoolfordeacons.org/, and the page on discernment is at https://schoolfordeacons.org/seeing-the-deacon-in-our-midst.